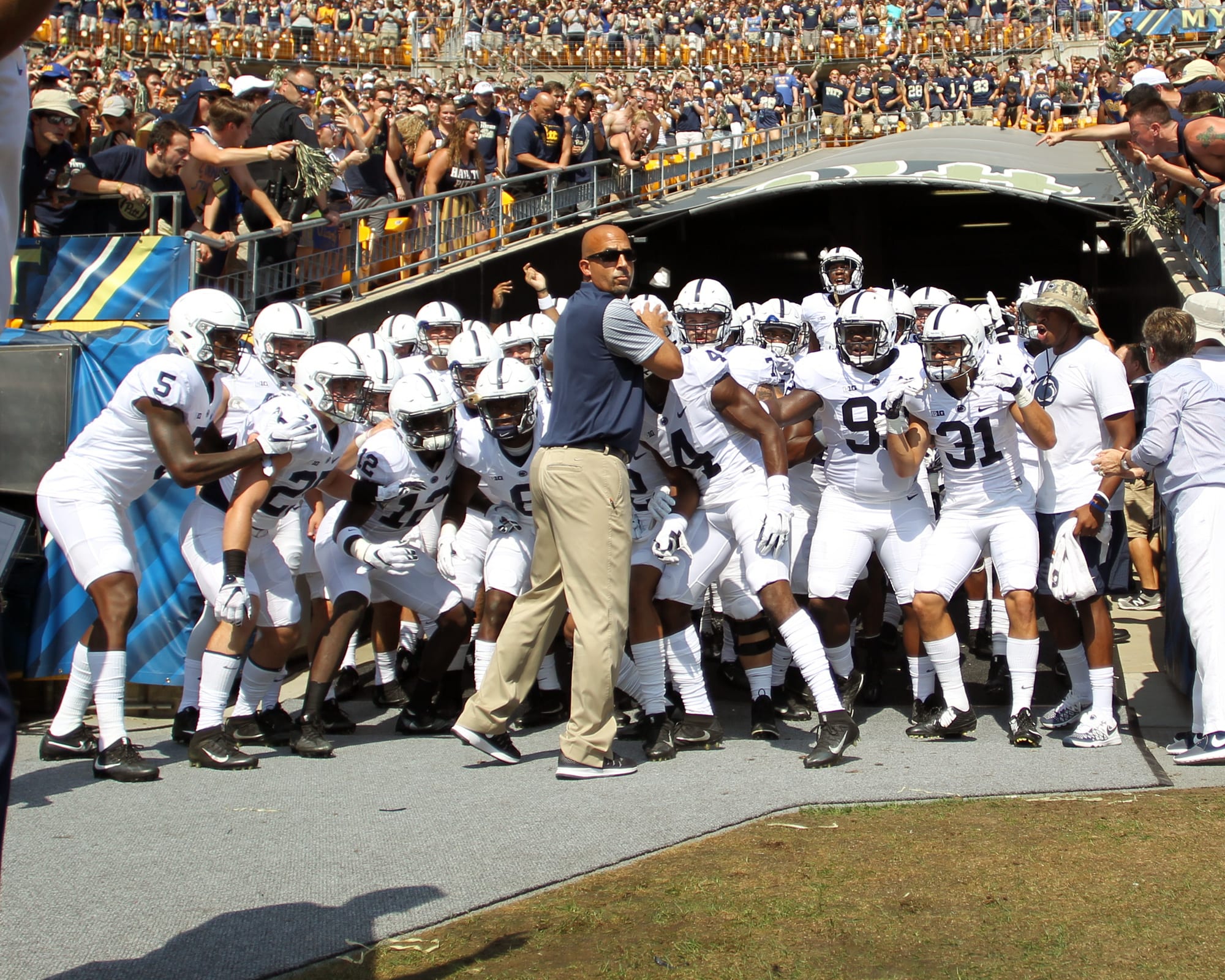 PITTSBURGH — If you saw some of the comments from Penn State head coach James Franklin after the Nittany Lions’ 42-39 loss to Pitt on Saturday, you may have heard about the clap flap.

But was there something to what Franklin said? Here are his comments Saturday:

“I thought it affected our communication early on. We were going to (a) clap cadence on offense. They were clapping on defense. The officials told us that it is legal to do that now. … There was one 3rd and 5 early that I thought was a significant point in the game.”

Franklin then again doubled down on his comments at his press conference Tuesday and called the play “illegal.”

Let’s take a look at what Franklin is talking about. First of all, what the heck is a clap cadence?

It’s a system popularized by Ohio State head coach Urban Meyer that replaces the traditional verbal cadence of the quarterback with a single, loud clap. The clap is the signal from the quarterback to the center to snap the ball and the rest of the offensive lineman can start to block as soon as they hear it.

Here’s an example of Penn State quarterback Trace McSorley using a clap cadence on the opening play against Pitt.

The clap cadence is the solution to a problem created by all-shotgun offenses. In loud environments, teams would traditionally go to a silent cadence. The quarterback touches the center, and after an arranged period of time, the center snaps the ball. The other offensive players would have to watch the ball to see when it was snapped.

But with the quarterback in the shotgun, a traditional silent cadence won’t work. The one, loud clap of a clap cadence also does a better job of cutting through the crowd noise than a traditional “hut” or “hike.” By using a clap cadence, the entire offense can know when to expect the ball to be snapped without having to look at it, which helps the blockers get a head start on the defense.

Like any cadence, the clap cadence can be timed by the defense. To combat that, teams will add a second or two of delay after the clap at times, the quarterback can fake a clap or the team will come up to the line without a play called and after the first clap, look back to the sideline for the signal.

Here is a play on that opening drive where the Nittany Lions added a delay after the clap and drew Shakir Soto offside:

Franklin said that Pitt was hurting their communication by mimicking the clap. Penn State did have a false start penalty on the opening drive, but there doesn’t seem to be anything that Pitt did. The left side of the Penn State line just jumped early.

But what Franklin was really getting at happened on the 3rd and 4 play at the end of the drive. As Penn State got into their set positions, Pitt linebacker Mike Caprara made one loud clap, exactly mimicking McSorley’s signal. Center Brian Gaia snapped the ball while McSorley was still checking his receivers, causing a fumble.

McSorley was able to recover and still get a pass off, but it was incomplete and the Nittany Lions were forced to punt.

Of course, the video seems to miss Caprara entirely, instead showing a tighter camera angle. There is a wider angle that was on ESPN’s Skycam feed, but it has since been removed. If anyone can find it — let me know!

Narduzzi explained after the game that the Panthers make a lot of signals on defense, including clapping, tapping helmets, making a “raise the roof” sign and others. But when the defense is making a signal to change the play, the entire defense usually mimics the signal. Here’s a typical Pitt defensive signal:

Instead, on that early third down, it was a case of just Caprara making the one, loud clap that McSorley was using to time his offense.

It sure looked to me from viewing the Skycam feed (and again, hopefully someone can find that other video!) Caprara’s intention was to do exactly what it accomplished: a false start or better yet, a fumble. Franklin vociferously complained to the referees immediately after that play, but was told that it is legal for the defense to clap in that fashion. But it appears that may not be entirely true.

From the NCAA rulebook: “No player may call defensive signals that simulate the sound or cadence of (or otherwise interfere with) offensive starting signals.”

Regardless of Caprara’s intentions, it’s abundantly clear that his play interfered with the offense’s signals. The penalty for such a violation is a five-yard delay-of-game penalty, although in practice, it seems likely at least one warning would be issued before a penalty is called.

This isn’t the first time Narduzzi has run afoul of an opposing head coach with pre-snap claps. Bo Pelini, then with Nebraska, accused Narduzzi of doing it with his Michigan State defense back in 2014.

At the end of the day, the clap flap has probably been a bit overblown. But it appears that at least once, Pitt was indeed in violation.

UPDATE (7:01 PM): The Pittsburgh Post-Gazette’s Craig Meyer got a clarification from the Big Ten, whose officials were in charge on Saturday:

With that in mind, it makes it pretty much impossible that what Pitt did should have been penalized, even if it was intentional. How is the referee supposed to know if that’s a legitimate defensive signal or not? Best-case scenario for Penn State would have been a warning telling Pitt to stop clapping because it was affecting the offense.

New Pitt LiveWire Video Will Give You Chills