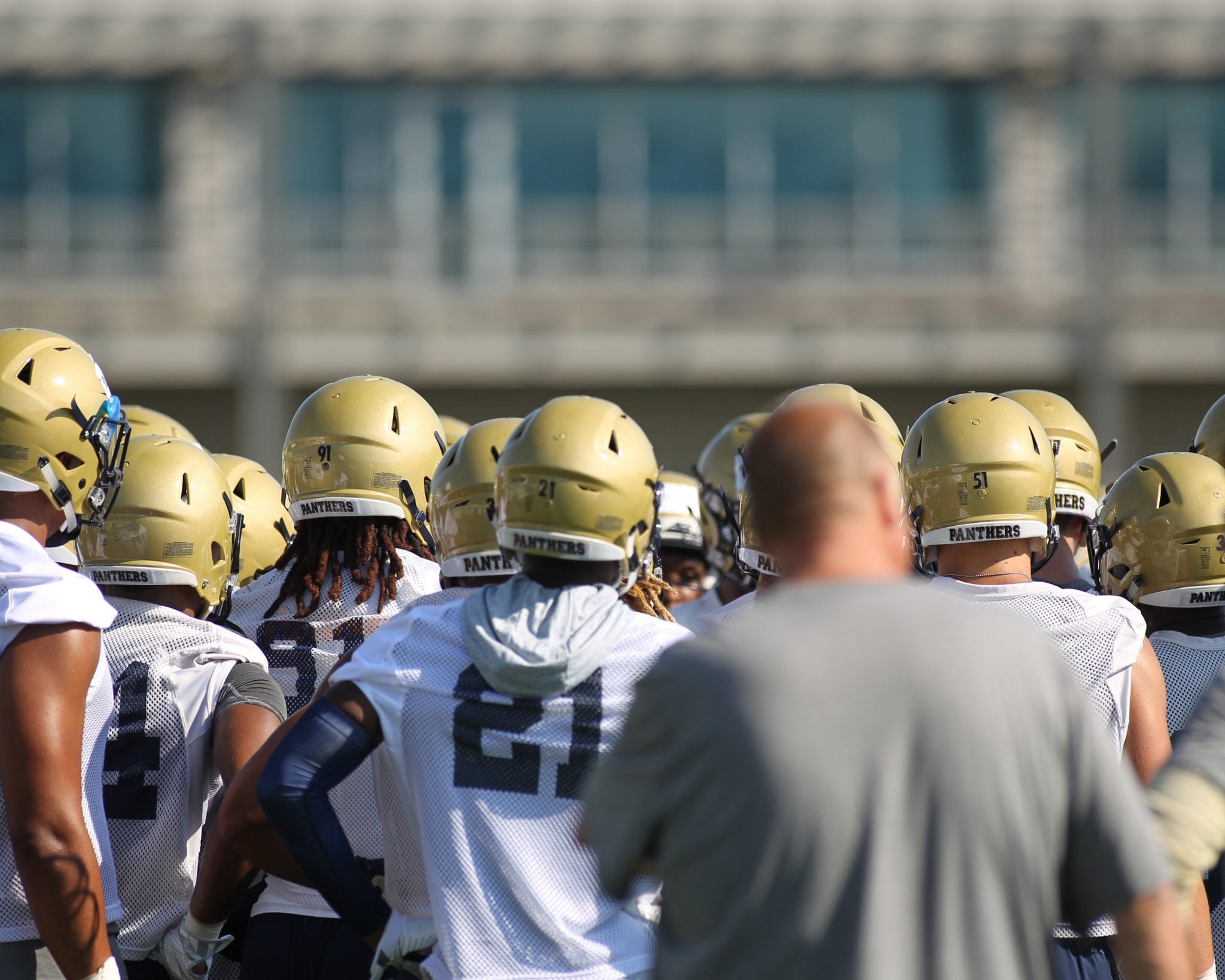 Today starts Week Two of Pitt football camp.  The Panthers will have have open practices and PSN will be at all of them. Follow Alan Saunders and Mike Vukovčan all week for news, notes, practice video and interviews.

Pitt added four players to the roster on Monday, but they also lost two. Walk-on tight end DeAndre Schifino is no long on the roster and will transfer, according to a team source.

Schifino did not see extensive playing time in the spring game despite being one of the few healthy tight ends on the roster. Pitt’s 2017 freshman class had three tight ends and the team also added transfer Matt Flanagan from Rutgers.

The other player that is no longer on the roster is backup long snapper Conrad Brake. Brake redshirted as a freshman in 2016. He remains enrolled at Pitt.

Pitt linebacker Seun Idowu started the final 12 games of the 2016 after Elijah Zeise was injured in the season opener against Villanova. That means he played more than any other returning defensive player.

Idowu talked about his unlikely journey from walk-on safety to the leader of the linebackers and more after practice on Monday.

Pitt has four players on the offensive line that are returning starters: Alex Bookser, Alex Officer and Brian O’Neill from 2016 and Jaryd Jones-Smith from 2014.

Beyond that, they have very little experience. Redshirt junior Connor Dintino, who has moved from defensive tackle to fullback and now to center, will battle walk-on redshirt freshman Jimmy Morrisey at the center spot.

Recent graduate transfer Brandon Hodges will provide some depth at tackle and redshirt freshman Justin Morgan has stepped up as the second guard. When asked about his depth on Monday, head coach Pat Narduzzi singled out another player as one that’s stepped up, as well: redshirt sophomore Tony Pilato.

“Tony Pilato has really made some strides, which is where a lineman should be going into his third year,” Narduzzi said. “He redshirts as a freshman. His second year, he’s still going, ‘Hey, where am I?’”

Not only does Pilato have a better grasp of the offensive schemes he’s being asked to execute, he’s playing for some family pride, now, too. Pilato has changed his uniform number to 72, the same number his father Sam Pilato wore as an offensive lineman at Pitt in the early 1980’s.

**Pitt OT Brandon Hodges made his Panthers debut on Monday, participating in his first practice since coming to the team late in the summer as a graduate transfer from the University of Texas.

Hodges is listed at 6-foot-4 an 315 pounds and will wear No. 58. Head coach Pat Narduzzi said that he’ll primarily work at right tackle.

“[He’s] a quality guy that’s played some good football and we expect to get even better football out of him,” Narduzzi said.

**Here are the sights and sounds from Pitt’s Monday practice session, held indoors at the UPMC Rooney Sports Complex.

**Pitt has added three walk-on freshmen to the team’s roster.

**Narduzzi just spoke to the media and pointed out the consistent play of senior defensive end Allen Edwards. Pitt has an opening at end opposite Dewayne Hendrix so it appears Edwards is making a case for himself.

**It’s raining here on the South Side so it looks like the Panthers will move practice inside today. Pat Narduzzi will be speaking to the media at 9:30 AM and players will be available for interviews at 12:15 PM. This is the first time the media has been able to speak to the players during this camp.

Future of the Pitt Quarterback Position