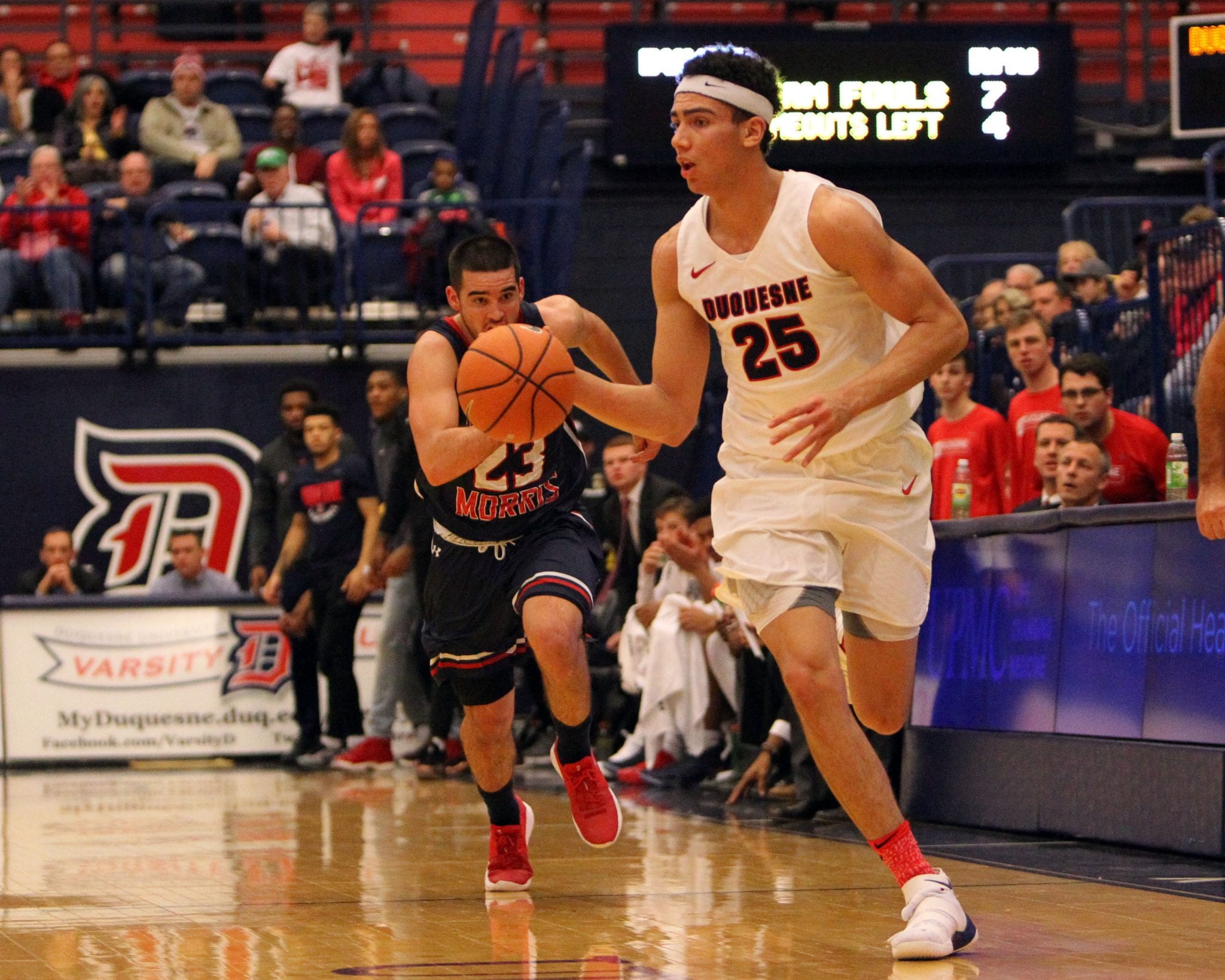 PITTSBURGH, Pa. – The Duquesne men’s basketball team returns to action Monday night after a seven-day layoff when it hosts the Cornell Big Red at 7 p.m.

After starting the season 2-0 with wins over St. Francis Brooklyn and VMI, the Dukes crumbled in the second half against crosstown rival Robert Morris last Sunday, losing 66-59. The Colonials held Duquesne without a field goal for more than eight minutes and went on a 14-5 run to turn a one-point deficit into an eight-point advantage. Duquesne missed eight of its final 10 shots from the field.

The biggest storyline heading into the Monday’s night contest will be Mike Lewis II. Can he bounce back after failing to score a point against Robert Morris? Hopefully, a week off will be the perfect remedy to clear his head.

The guard trio of Lewis II, Renee Castro-Caneddy, and Tarin Smith must be at their best against Cornell. The trio was limited to 22 total points versus the Colonials after scoring 57 in the win over VMI.

Cornell is coming off its best win to date, taking down a solid Toledo squad, 80-77, Friday in Ithaca, New York. The Rockets’ only previous loss was an eight-point setback to Syracuse.

The Big Red hit 12 threes and shot 56 percent against Toledo, and the junior duo of Matt Morgan and Stone Gettings combined for 45 points.

The win improved Cornell to 2-3 on the season overall, and the Big Red is one of just 16 Division I teams to return more than 70 percent of its scoring, rebounding, and assists from 2016-17.

It’s just the third all-time meeting between Duquesne and Cornell and the first since 2003. The Dukes have won both matchups, and the Big Red is 19-23 all-time versus Atlantic 10 opponents.

Since scoring just 45 points in their opener against Syracuse, the Big Red are averaging more than 78 points per game. On the season, Cornell is giving up more than 80 points a contest and allowing opponents to shoot nearly 40 percent from three.

Morgan leads the team in scoring with 22 points a game and is hitting nearly 44 percent of his three-point attempts. He has led the Ivy League in scoring in each of his first two seasons. Morgan tested the NBA draft waters last spring but didn’t sign with an agent and decided to return for his third season. It will be interesting to see which Duke draws the defensive matchup against the 6-foot-2 guard. I’m guessing either Tarin Smith or Renee Castro-Caneddy.

Gettings checks in at 6-foot-8 and 234 pounds. He’s averaging more than 13 points a game and could present problems for the Dukes’ thin and foul-prone frontcourt. While Jordan Robinson has the frame to match his physicality, Tydus Verhoeven’s length and shot-blocking ability might be better suited to disrupt Gettings. Nonetheless, it’s imperative for either player to avoid early foul trouble.

Speaking of Verhoeven, his Duquesne career is off to a promising start. The forward ranks fifth nationally and first among all freshman with four blocks per game. He’s blocked more than 17 percent of opponent’s shots when on the floor, which also ranks fifth in the country.

Y’all agree Mo Bamba looks scary defensively, yes? Well check out Duquesne freshman, Tydus Verhoeven. “Only” 6’8 but blocked 17.7% of opponents shots while on the floor this season, which ranks 5th nationally. Small sample but a number to watch.

Robinson is still searching for his breakout game—he’s averaging only five points and four rebounds in 23 minutes of action. Duquesne fans will also want to watch for sophomore Kellon Taylor, who joined the team last Sunday after the Dukes’ football team wrapped up its season. It will be interesting to see if he has gained head coach Keith Dambrot’s trust or if he needs more time to get up to speed.