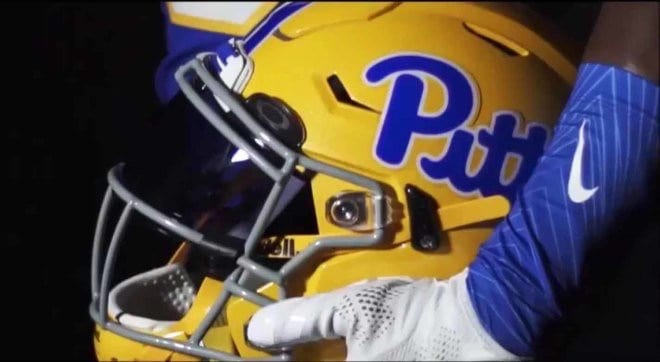 11:13 a.m: There’s a break in the action in the late morning, and Pitt now sits with 15 signees. The only announced verbal commit that we’ve yet to hear from is New Jersey tight end Matt Alaimo.

Alaimo was a high school teammate of Pitt QB signee Nick Patti and is the older brother of Pitt 2020 QB target Michael Alaimo. New Jersey Rivals writer Richard Schnyderite and Panther-Lair’s Chris Peak have reported that Alaimo is not planning on signing today.

Pitt head coach Pat Narduzzi has previously said that he would assume that any previous verbal commit that doesn’t sign today would not be coming to Pitt and that he would continue recruiting with that scholarship.

There is also another silent commit that has not yet signed. We’re still awaiting the decision of Florida WRs Jeshaun Jones and Shockey Jacques-Louis.

10:26 a.m: Pitt has a second quarterback and a second junior college transfer in the fold, as Ventura College pocket passer Ricky Town has been signed by the team.

Town, 21, spent an off-season semester at USC, a year and a half on the bench at Arkansas and one season as a starter at Ventura before coming on board with the Panthers.

He’s listed at 6-foot-4 and 220 pounds and is projected to immediately push starter Kenny Pickett in 2018. Town will have two years of eligibly left with the Panthers.

10:00 a.m: Pitt has a third defensive back in this class, as the Panthers have signed Florida DB V’Lique Carter.

Carter is listed at 5-foot-10 and 165 pounds. Until just this week, he was an Iowa State commit, but he flipped to the Panthers on Monday. The West Palm Beach, Florida native went to Oxbridge Academy and is rated as a three-star prospect by 247 Sports.

8:58 a.m: It’s not much of a recruiting class without a quarterback, and the Panthers just shored that up, as St. Joseph Regional (Montvale, N.J.) star quarterback Nick Patti has signed with the Panthers.

The three-star pocket passer is listed at 6-foot-3, 194 pounds and chose Pitt over North Carolina and host of other offers. Patti’s teammate Matt Alaimo is also a Pitt verbal commit, but he hasn’t signed yet.

8:52 a.m: Ohio defensive tackle Tyler Bentley has sent his papers to the Panthers.

The 6-foot-3, 295-pound lineman out of West Chester, Ohio (home of Pitt basketball guard Monty Boykins) was a one-time Kentucky commit, but the Panthers flipped the three-star prospect earlier this month.

There is also an unannounced verbal commit, and Pitt is pursuing other players to this moment.

We will also be paying attention to the announcements for Aliquippa’s Kwantel Raines at 10 a.m. and for Florida WR Jeshaun Jonesat 11 a.m.

Stay tuned and we will continue to update you through the day.

8:18 a.m: Pitt has recruits from the state of Alabama in back-to-back classes as Phenix City, Alabama wide receiver Cameron O’Neil has signed with the Panthers.

O’Neil joins linebacker Cameron Bright as Alabamians on the Panthers’ squad. The 6-foot-3, 190 pound wideout picked Pitt over the likes of Memphis, Vanderbilt and Wisconsin.

7:55 a.m: Linebacker Wendell Davis has submitted his paperwork to sign with Pitt. The Richmond, Virginia native is listed by the Panthers at 6-foot-2 and 215 pounds.

Coming out of Benedictine College Prep High School, Davis was rated a three-star prospect and chose Pitt over Virginia Tech and West Virginia, among others.

7:47 a.m: Pitt has junior college offensive tackle Chase Brown on board. Brown will come to Pitt after two years at Lackawanna Community College in Scranton, Pa. and will have two years of eligibility remaining. Brown is originally from Ashburn, Virginia.

He has a chance to step in right away as a starter on an offensive line that graduated three players and also lost starter Brian O’Neill to the NFL.

7:43 a.m: Pitt has exhausted its supply of local linemen in the first hour, with Central Catholic defensive lineman David Green the latest to sign with the Panthers.

Green, listed at 6-foot-1 and 250 pounds, is a three-star defensive end prospect that chose Pitt over several Power Five offers, including Virginia Tech and West Virginia.

7:41 a.m: Pitt’s seventh signee of the day is cornerback Marquis Williams out of Cardinal Gibbons High School in For Lauderdale, Florida.

Williams is 5-foot-9 and 165 pounds, but has quick hands and feet and covered high-level receivers in Florida’s 4-5A Class. The three-star prospect had a long list of offers and chose the Panthers over Clemson, Louisville, Michigan State, Penn State, Nebraska and Wisconsin, among others.

Morgan is listed at 6-foot-2 and 250 pounds and projects to be a weak-side end. Morgan is an explosive pass rusher and a three-star prospect that chose the Panthers over Maryland, Penn State and Virginia Tech, among others.

7:24 a.m: Stop me if you’ve heard this before: another WPIAL lineman has signed with Pitt. This time, it’s Butler offensive lineman Jake Kradel.

Kradel, listed at 6-foot-4, 295 pounds, is a three-star prospect that chose Pitt over a slew of offers from the likes of Iowa, Ohio State, Virginia Tech, West Virginia and Wisconsin.

The 6-foot-4, 225-pound strong-side defensive end is rated as a three-star prospect by 247Sports.

7:14 a.m:The first recruit from outside of Western Pennsylvania to send his papers to Pitt is DeMatha Catholic cornerback Judson Tallandier II.

Pitt lists Tallandier at 6-foot-2, 180 pounds. The Huntsville, Maryland native is one of two Pitt commits from Dematha. The other is defensive end John Morgan.

Tallandier is a three-star prospect that chose Pitt over Arizona, Georgia, Kentucky and Maryland, among others.

7:06 a.m: Pitt’s first commit to sign on the line is Thomas Jefferson defensive tackle Devin Danielson. It’s fitting that he’s the first in line, as he was one the commit that was around the team the most this season, coming to practices and games alike. Pitt lists Danielson at 6-foot-3, 295 pounds.

Danielson is rated as a 3-star prospect by 247Sports and chose Pitt over offers from Louisville, UCLA, Virginia and West Virginia, among others.

The change, enacted in 2016, but taking place for the first time in 2017, will change a lot of the recruiting landscape of this time of the year. Here’s a breakdown of some of the changes to the rules and what to expect on Wednesday as the faxes start to roll it.

Players that don’t sign with a school during this signing period will still be able to do so during the regular signing period from Feb. 7 to April 1. Because of the timeframe of the signing periods, any potential early enrollees must sign with Pitt during the early singing period. Junior college transfers can sign at an point from Wednesday through Jan. 15.

• Who is going to sign today? Pitt fans should expect that each of the school’s 16 announced verbal commits will sign today, because that’s what the coaching staff is expecting. Head coach Pat Narduzzi has said that if a player is verbally committed to Pitt and he doesn’t sign on this early signing day, that he’s going to start recruiting with that scholarship elsewhere.

• Who else might sign today? Pitt is still working on several other players besides the ones committed, and there is one verbal commit that Pitt has secured that has not been announced by the player. The two big undecided names are Florida receivers Jeshaun Jones and Shocky Jacques-Louis.

• What will happen when? As soon as Pitt receives faxes from signees, we’ll post them here to our Signing Day Tracker and that should start a few seconds after 7 a.m.

Aliquippa’s Kwantel Raines is supposed to be sending his papers to West Virginia at 10 a.m. We’re not expecting any drama there, but I’ll be headed over to make sure. Jones is announcing his commitment at 11 a.m. Narduzzi will hold a press conference at 1 p.m. Jacques-Louis is announcing his decision at 6 p.m.

News other than Pitt’s signees will end up the Recruiting Notebook, so check there for updates, as well.