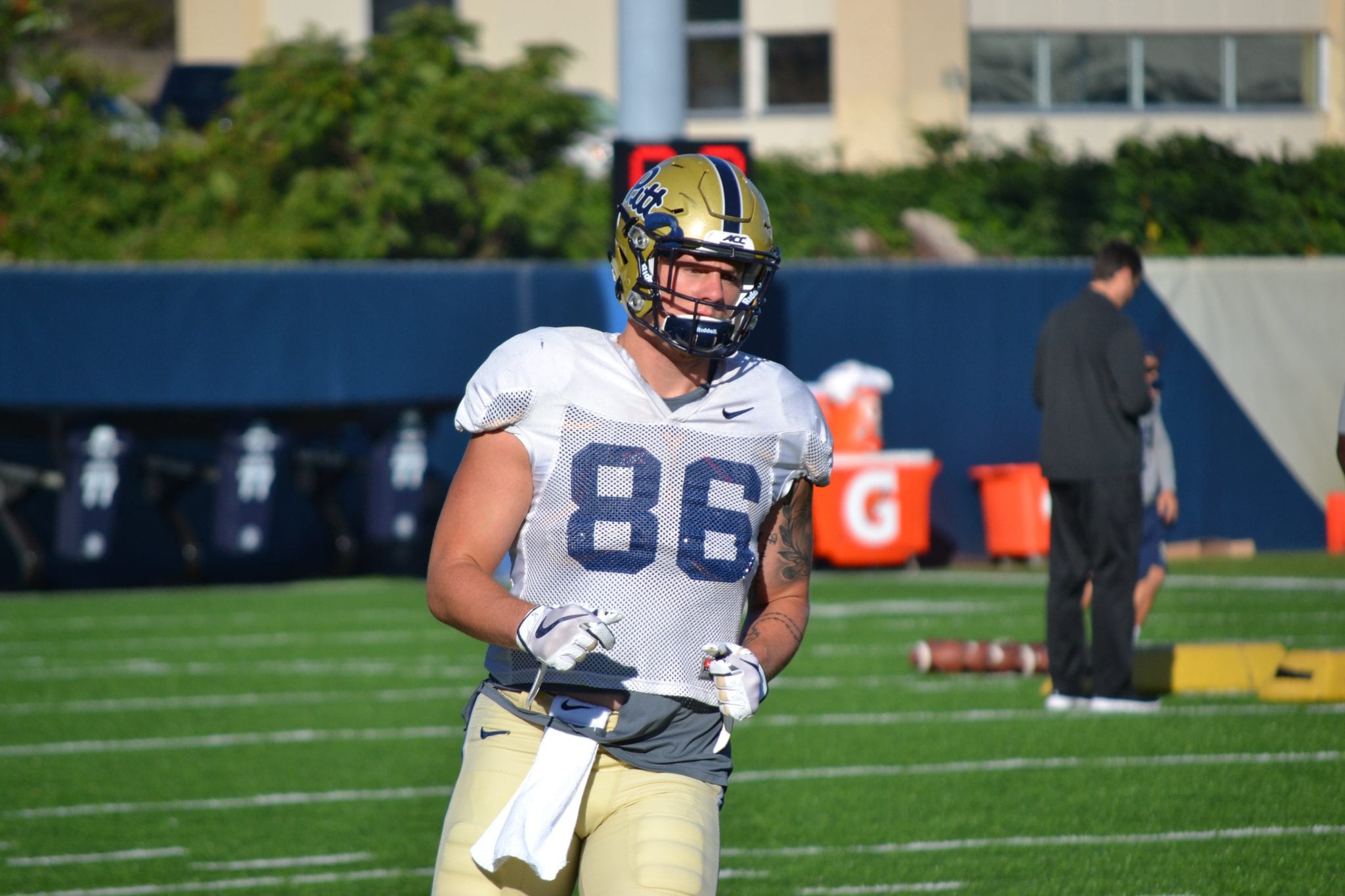 Despite being a true freshman, Tyler Sear showed enough promise that he was one of just six true freshman to get game action last season.

With the departures of Chris Clark (left team), Matt Flanagan (graduation), Charles Reeves (left team), Sear is going to be counted on to be the leader of a relatively young tight end group despite being just a sophomore.

Sear saw playing time in Pitt’s first five games and then his action was mostly reduced to special teams actions. Even with up and down playing time, the Neshannock native believes everyone is going to see a better player than what they saw a year ago.

“Going back and watching film from last year’s camp, I was like dang I stink, I wasn’t good,” said Sear. “Now when you look at things, my whole game has improved, my footwork, my routes, adjusting to college just takes time. Looking back at camp a year ago, I was a completely different person. There’s no comparison at all.”

What’s the biggest thing that Sear had to get accustomed to in going from going from WPIAL to Power Five football?

“Probably just the speed of the game and size of the players. I’ve always been able to play but whenever you get here, you’re a little star struck and it takes awhile to adjust and to see yourself as one of those guys.”

Confidence is no longer an issue for Sear as he evaluates himself and also when asked about the expectations for this years team.

“Right now, I feel great and I feel like we can compete with anybody and beat anybody. We break on ACC Championship everyday for a reason.”

Sear has the type of personality that tells you right away that he’s going to be a leader for the Panthers on and off the field for the next few years. Speaking of personalities, we wanted to know what it’s like to play for his position coach, Tim Salem, one of the more popular coaches on the Pitt staff.

“It’s like nothing you’ve every experienced, I can promise you that,” said Sear. “You can get a text message at any point, three in the morning, four in the morning, he’s just a different guy. His motor never stops running, it wears on you but he has great intentions and I’m really thankful to be able to play for him.”

Pitt fans will get their first glimpse of Sear and the rest of the Panthers next Saturday and while no one nationally is predicting anything special this season, he senses something different and possibly special happening on the South Side.

“It’s just feels completely different. Coming in last year, you’d come in everyday grinding and working. This year, everyone is having fun. Today, the band came it was just fun. Last year, I remember it was like oh the band is here, this year it was fun. We’re just out there having fun, competing and it’s just night and day,” said Sear.

“I think it’s new leadership. Nothing against those seniors from last year because I loved all of them especially the tight ends that aren’t here anymore but this year, it’s new guys, new blood and a different mentality. It just seems to be a lot more light hearted while also getting your job done and really taking it to heart and really taking pride in what you do