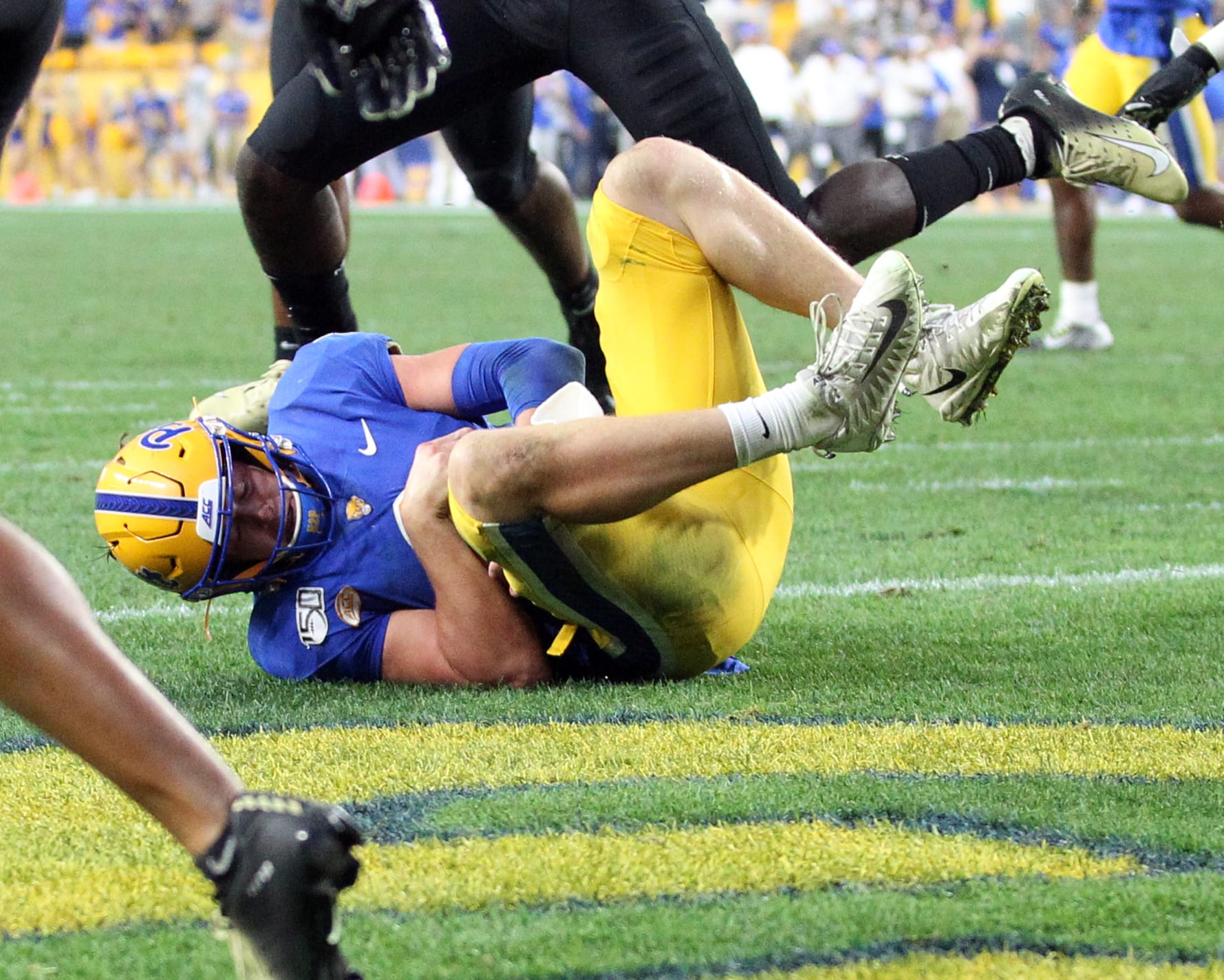 PITTSBURGH — It started in August, in the second week of Pitt’s training camp at UPMC Rooney Sports Complex on the city’s South Side.

As he did with dozens and dozens of other plays, first-year Pitt offensive coordinator Mark Whipple — a veteran of a half-dozen FBS and NFL programs — installed a play called Pitt Special, a trick short-yardage play.

No one knew at the time how impactful it would become.

The play is a complicated one. Pitt’s quarterback Kenny Pickett pretends to be changing the play and walks to the line of scrimmage. Center Jimmy Morrissey snaps the ball directly to running back A.J. Davis.

Davis takes a couple steps to his left and tosses the ball to wide receiver Aaron Mathews, who is looping back around the formation from the left to the right.

Mathews has the option to run it to the far sideline or throw it to Pickett, who sneaks out into the flat a few yards down field.

The first time Pitt’s offense ran the play against a live defense, the results were mixed. Mathews sprinted to the pylon. He says he scored. Starting safety Damar Hamlin said that if it was really a live play, someone on the Pitt defense would have tackled Mathews.

Regardless, the Pitt Special was put into the rotation of plays that Whipple put in the game plan each week and Pitt’s offense performed it numerous times throughout the early part of the season during their Thursday walk-throughs.

On Saturday, Pitt broke the play out one more time, as Mathews hit Pickett two yards deep into the end zone with 56 seconds left on the clock as the Panthers upset No. 15 UCF, 35-34 at Heinz Field.

As a trick play, it has a little bit of everything. There’s the fake play-change to catch the defense napping, the direct snap, the reverse and then perhaps the least likely of all, throwing the ball to quarterback.

Of course, you might have seen it once before. It’s a play the Philadelphia Eagles used to beat the New England Patriots in Super Bowl LI.

When Nick Foles caught that pass from Trey Burton in the end zone, he was wide open. New England was totally fooled. This time, Mathews had to thread a ball though traffic to find a diving Pickett, significantly increasing the degree of difficulty.

But Pickett isn’t an everyday quarterback. Pitt’s junior signal caller has not had a ton of success as a pocket passer. He’s not a prototypical dual threat quarterback, either. But Pickett frequently uses the wheels that he has and pure toughness to escape pressure, break tackles and help his team move the sticks. So running a corner route is no big deal.

“Growing up, I played everywhere in Pop Warner,” Pickett said after the game. “I’ve run routes before, growing up. It’s just catching the ball and just being a football player, really.”

“Kenny says he has the best hands on the team,” joked Mathews.

Pickett’s unique skillset made him an important part of the play. But he almost wasn’t in the game.

Late in the third quarter, Pickett scrambled for 11 yards and a first down at the UCF 17, but after the play, UCF defensive tackle Cam Goode was flagged for unsportsmanlike conduct and Pickett needed help coming off the field.

Redshirt freshman Nick Patti relieved Pickett and scored a touchdown — Pitt’s first since the first quarter — which brought the Panthers back to within striking distance of the Knights.

“There’s going to be pain involved football,” said Pickett, who retuned during Pitt’s next drive. “It’s part of the game. It’s what you sign up for.”

But with Pickett back in the game, Pitt’s first three fourth-quarter drives failed miserably, with the first and third ending in Kirk Christodoulou punts and the second resulting in a missed Alex Kessman field goal.

UCF got the ball back with 8:07 to play and tried to milk as much of the clock as it could, twice converting on fourth down while driving all the way to the Pitt 14. There, the Panthers’ defense made its stand.

UCF head coach Josh Heupel decided three fourth down tries was too many and kicked a 28-yard field goal to give Pitt the ball back and make the Panthers score a touchdown.

“All we know is if we can get a stop and put the ball in their hands, Coach Whip is gonna whip something up and get the job done,” Hamlin said.

The Panthers used 11 plays to go from their own 21 to the UCF 3, including a fourth-down conversion Pickett earned by drawing the Knights defense offside.

There, Pitt faced a decision. After a Pickett scramble, Pitt was left with 4th and 2 from the 3-yard line.

The Panthers are coached by notoriously conservative Pat Narduzzi, who a week earlier had made national headlines for refusing to go for it on 4th and goal from the 1-yard line down a touchdown late at Penn State.

This time, Pitt had to go for it. But there’s going for it, and then there’s calling a trick play with the game on the line.

But when Whipple made the call, Narduzzi didn’t balk.

“You’ve got to have belief,” Narduzzi said. “It’s the worst thing you can do to an offensive coordinator is say, ‘Are you sure?’ He’s got confidence, our kids got confidence.”

How confident was Whipple? When the Knights called timeout to preserve what was left of the clock, an official came over to tell him Pitt could get a first down at the 1-yard line. Center Jimmy Morrissey overheard the interaction.

“The ref came over in that timeout and said, “Coach Whip, it’s a first down if you get it to the 1,” Morrissey retold. “[Whipple] said, ‘We’ll be fine. We’re going to score on this play.’”

The offense was immediately excited about the call.

“As soon as he said that, it kind of gives confidence to the whole offense,” Morrissey said.

“We’ve had that play in since the second week of camp, maybe,” added Pickett. “You know you got it. You’re just waiting for it to get called. When they called it, we were all juiced up.”

That was even the case for Mathews, the man that would have so much of the play fall on his shoulders.

“I’m never nervous out there on the field,” Mathews said. “I’m anxious more than anything. When they said they were going to call it, I was just anxious. Not really nervous at all. I’m never nervous doing something I love.”

When Mathews started his reversing motion and took the pitch from Davis, his first thought was that he’d run it into the corner of the end zone, just like he did in practice.

But that wasn’t going to happen here. UCF did a far better job of defending the play than the Patriots did.

“When he first called it, I’m thinking I’m just going to run, but then the two big rushers came off the edge,” Mathews said.

“They actually did a good job,” Pickett said. “Their D-end jumped outside. So I tried to act like I was blocking him, like for a reverse. I just threw him by and tried to leak into the end zone. Aaron did a great job of getting it up.”

“I saw KP open and just slipped him a little pass,” Mathews said.

Pickett cradled the ball, bounced off the turf and then ran toward the Pitt student section in celebration.

The Pitt defense made one more stop and the Panthers put a bow on their third shocking upset of a Top 15 team in four years.

There have been legendary moments in those games that stand out to fans years later: Chris Blewitt’s game winning field goal in Death Valley, Pickett diving for the pylon against Miami.

But there is nothing in Pitt’s history — or practically anyone’s history — like calling a trick play, needing a touchdown, on a fourth down with less than a minute to go against the No. 15 team in the country.

And then nailing it.

“We’ve practiced it a lot,” Narduzzi said. “It’s called a Pitt Special, and it was special today.”