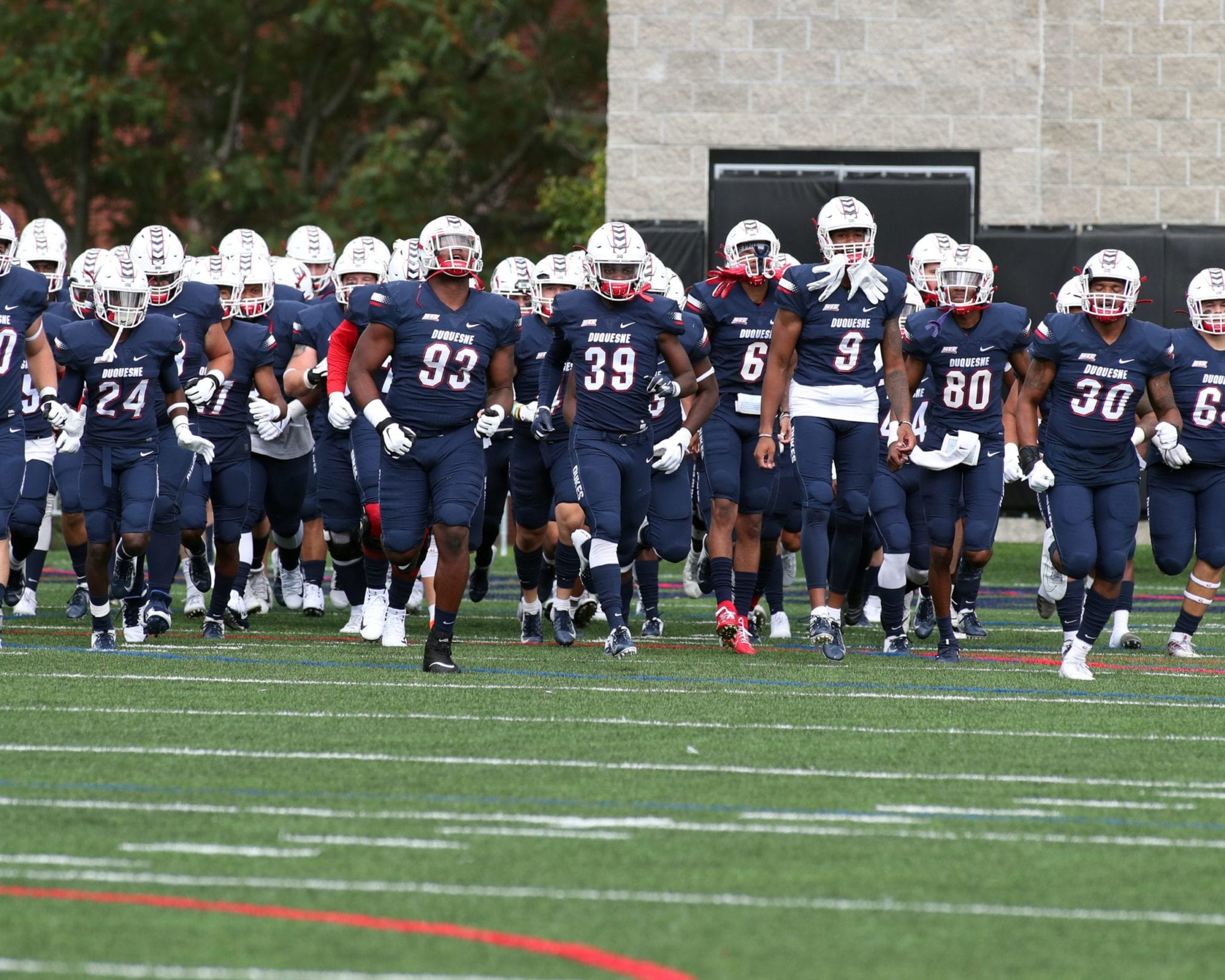 PITTSBURGH – With three minutes left in the fourth quarter of a one-possession game against Long Island University Post, Duquesne’s offense trotted out onto the Arthur J. Rooney Field turf knowing it had to find a way to grind out a couple of first downs. The Sharks, a team projected to finish last in the Northeast Conference, surprisingly trailed the NEC-favorite Dukes by only a single touchdown with three timeouts left –  well within reach of tying the game to force what would’ve been a shocking overtime affair.

Everyone in the stadium knew who was getting the ball. After all, A.J. Hines – the active FCS leader in rushing yards and rushing touchdowns – is on the Walter Payton Award watch list for a reason.

After a pair of four-yard gains, the Dukes faced 3rd-and-2 as the scoreboard read 2:59 remaining. LIU had called a timeout, giving Duquesne coach Jerry Schmitt just enough time to identify the right play that would move the chains. But it wasn’t that complex. It didn’t need to be. A simple off-tackle handoff to the left would serve just fine.

Hines found a crease, took one cut and exploded through the hole – running over an LIU defender like a 220-pound mack truck for a six-yard gain that earned a critical first down. He stood up, turned to the Duquesne sideline and flexed his muscles in Hulk-like fashion – letting out an emphatic scream in the process.

Hines isn’t known to be a loud leader, but after a play like that…

He clearly made an exception.

“When the offense came out, we knew we had to go get it in a clutch situation,” Hines told Pittsburgh Sports Now. “I give it all to the boys up front. They locked in at the end and made it happen for me to open holes, and I did what I did.”

“People don’t know, but he’s really a quiet kind of competitor,” Schmitt said after the game. “It burns him not to be successful. He drives it hard, but he’s not vocal about it. He’s not a loud captain type. He’s got this quiet competitive nature about him. You see it on the field, but I see it on the sideline.”

With 140 yards and a touchdown on 32 carries, Hines eclipsed the 4,000 yard mark for his Duquesne career to become the third player in the program to do so. And ironically, the other two Dukes who accomplished the feat – Larry McCoy and Donte Small – were both standing close by on the Duquesne sideline witnessing the occasion, accounting for a combined 12,000 yards of production. Small was merely a spectator, but McCoy, the leading rusher in school history with 4,549 career yards, has served as Hines’ position coach this season in his first year back with the program.

And best believe the student resembles the teacher.

“He reminds me of myself,” McCoy told Pittsburgh Sports Now. “In the sense as far as in downhill, physical football – a north-south 1-cut and go downhill power back. It’s a joy to coach. And then mentally, as well. He’s a tough kid. The way he runs and the mentality that he brings to the game with his style. He reminds me a lot (of myself) and it’s just good to see.”

Hines now trails McCoy by 420 yards with six games to go for the all-time rushing mark. A betting man would say the record is his for the taking.

“Records, they’re meant to be broken,” McCoy said with a smile. “Even though it was a fair amount of yards, it happens. It’s all about health and consistency.”

Consistency and Hines go hand-in-hand. The senior entered this season with a plethora of NEC honors, All-American nods and, perhaps most impressive, 20 100-plus yard rushing performances in his three-year career. This season, he rushed for 103 yards in the opener against Walsh before injuring his shoulder in a Week 2 loss at Youngstown State that caused him to miss the past two games leading into Saturday. But to no surprise, he was back like he never left against LIU after the short hiatus.

In addition to surpassing the 4,000 yard mark, Hines’ one-yard score in the fourth quarter tied him with Pedro Bowman (1981-84) for Duquesne’s all-time leader in rushing touchdowns (41).

“It’s a blessing to do what I do and to make history,” Hines said. “I’m just happy to be there with the greats and getting coached by The Great. It’s a blessing to have Coach McCoy here guiding me along the way.

“He’s a good teacher and a great asset to this team.”

Hines said McCoy’s biggest impact has come from a nutritional standpoint. McCoy spent four years playing professional football in Germany with the Berlin Rebels, where he learned about the vital importance for running backs to take meticulous care of their bodies. He’s been there to harp on sleeping patterns, stretching, nutrition and other little things that have big impacts.

“It’s big as far as in consistency in keeping get body right from week to week,” McCoy said. “Especially at the running back position, it’s about how fast you can bounce back before that next game when you have such a workload like A.J. has had. …It really benefitted me long-term over the course of those four years being in Germany. I’m trying to give back a lot of the little things I used to do.”

But personal accolades and records aside, Hines wasn’t as satisfied with Duquesne’s performance as a whole. After opening the game with a nine-play, 74-yard touchdown-scoring drive, the Dukes’ were inconsistent offensively showing an inability to finish drives. They settled for three field goal attempts in the first half, two of which sailed through the uprights, but were bailed out by a strong effort from the Dukes defense. Spencer Demerol and Todd Hill combined for 14 tackles and 1.5 sacks, while Daivon Ellison notched two interceptions and a fumble recovery that he returned for 21 yards. .

“The defense played outstanding,” Hines said. “Made turnovers, made plays. Offensively, we’ve got a lot of things to work on. We’re gonna take this bye week and get better, and get back to playing Duquesne football.”

“I think we made some critical plays and dialed in when we needed to,” Schmitt added. “Obviously, I’d like to see that the entire game. I’m happy we did that. The defense played well enough to win. That’s been three of the last four where the defense gave us an opportunity to win.”

Duquesne will travel to Sacred Heart for a road contest on Oct. 19.

Dukes Rally to Defeat Wagner, Improve to 3-0 in NEC Play