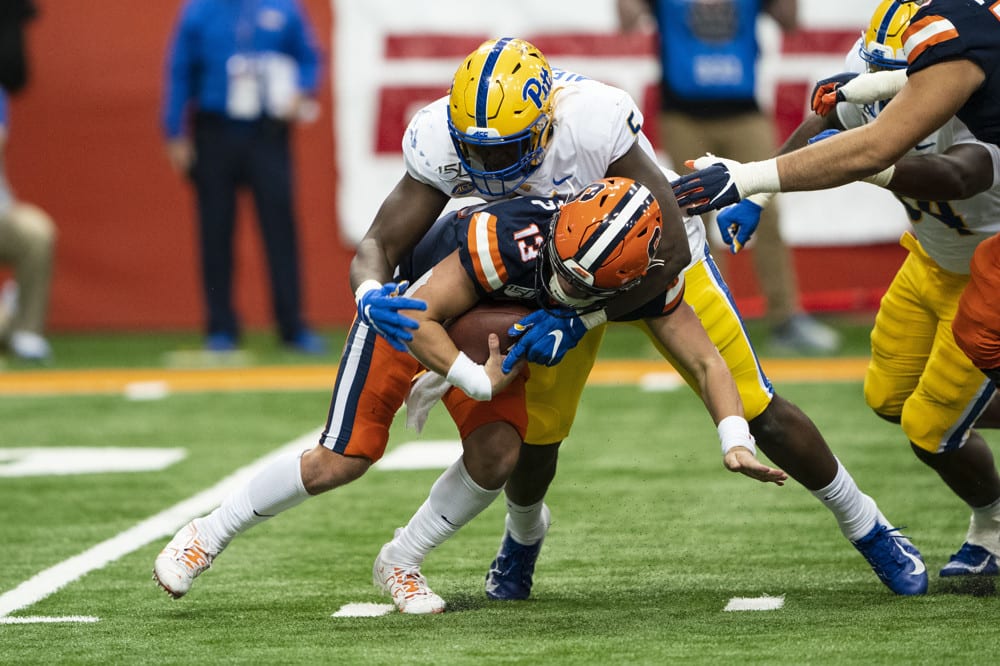 SYRACUSE, N.Y. — For better or for worse, the 2019 Pitt defense is doing an amazing job of embodying the principles Pitt head coach Pat Narduzzi began to install when he joined the Panthers back in 2015.

When Narduzzi was the defensive coordinator at Michigan State, he had a top-five defense in the country that was based on stopping the run, creating an absurd amount of pressure on the quarterback and pressing opposing wide receivers into oblivion.

When it works, it’s absolutely smothering and the kind of defense that not only stops an offense, but smacks it square in the mouth and says, “go ahead, come back for some more of that.”

Unfortunately, for the first four years of Narduzzi’s tenure as Pitt’s head coach, it hasn’t worked more often than it has. Pitt pass-rushers haven’t gotten home enough, the secondary hasn’t been able to keep up with tall, fast wide receivers, and it seemed that the scheme might be generally ill-suited to attack ACC offenses that would rather play in five-wide sets than make any real attempt at running the football.

This season has been a breakthrough, thanks to a defensive line that has been one of the best in the conference despite losing two starters for the season and a secondary that finally has the talent and depth of talent to run with the best receiving corps in the ACC.

In Pitt’s 27-20 win over Syracuse on Friday, all of the good parts — and some of the bad parts — of the defense were put on display.
Pitt sacked the Syracuse quarterbacks a combined nine times, the most for the program since sacking nine Temple Owls in 2001. Linebacker Kylan Johnson, who led Pitt with 1.5 sacks on Friday, was four years old.

That sack record belongs to way more than Johnson, a Florida graduate transfer that has flourished in Narduzzi’s system. Nine Pitt players had at least a half of a sack, including all four starting defensive linemen. Pitt has 36 sacks on the season, which not only leads the nation, is a whole eight sacks more than second-place Ohio State.

“It’s what we’ve done all year,” Narduzzi said. “Our kids have been relentless. … We missed some, too.”

“We’ve just been doing a great job of playing off each other,” defensive tackle Jaylen Twyman said. “We really appreciate each other and we’re like brothers.”

Even when they weren’t getting home for a sack, Pitt’s defense was disrupting the game.

Starting quarterback Tommy DeVito was knocked out of the game by a vicious Paris Ford hit. Backup Clayton Welch ended up being the Orange’s leading rusher, running for his life to the tune of 36 yards on 10 carries.

“Just seeing the type of routes they do, how they like to attack our leverages and our defense overall, just watching years and years and being on the team playing them, you know what they want to do,” Hamlin said. “I was just sitting there, a little bit more aggressive and made some plays on some balls today.”

The lack of a running game and a short-passing game kept the Orange from being in favorable down and distance situations. Syracuse was 5 of 18 on third-down conversions. Six of Pitt’s nine sacks came on third down.

Let me say that again. In 18 third-down tries, Pitt sacked Syracuse’s quarterback more often than Syracuse converted for a first down.
“Our back end has been doing a great job,” Twyman said. “Damar played a tremendous game covering those slots with how fast they were trying to eat up his cushion. They were locking the No. 1 receiver down, re-routing the slots and making the quarterback pull the ball down.”

If there’s a downside to Pitt’s aggressive, in-your-face defense, it’s that the cornerbacks are often pressed up to the line of scrimmage in order to disrupt timing.

Pitt typically plays quarters zone coverage, meaning that each outside defender is responsible for one-quarter of the field. The corners have help to the inside, but no help deep, so they play inside leverage and try to force receivers to the outside, using the sideline as an extra defender.

Most of the time, that involves playing press coverage, though Pitt’s corners do play off-ball and bail from time-to-time. And they’re good at press coverage. Dane Jackson, Damarri Mathis and Jason Pinnock are all big, physical players, and they can really disrupt a passing route when they get their hands on a receiver.

The problem Friday was getting their hands off the receivers. Pitt was flagged three times for defensive pass interference — once by Jackson and twice by Mathis — on the same drive in the second half.

More egregiously, with the game on the line on a fourth and long in the fourth quarter, Jackson was flagged for holding after he dragged his player out of bounds, giving Syracuse new life after the pass went incomplete. The Orange ended up scoring a touchdown on that drive to draw within a touchdown late.

“It looks like we were handsy out there at times, and then at times, I don’t know,” Narduzzi said. “The last one really bothers me. Fourth and 25, we’re in what we call ‘two dog.’ We had a safety over the top. There’s no reason for it. It sounds like we just wired him out of bounds.”

While situations must matter — Jackson’s holding penalty could have cost Pitt the game — in general, Pitt’s defense is OK with breaking a few eggs in order to make an omelette. If they have a couple pass interference penalties per game while otherwise completely dismantling an opposing offense, that’s an acceptable price to pay.

“They’ve got to go out and play defense,” Narduzzi said. “We don’t want to play with our hands behind our back.”

“No one presses their corners for 90 snaps a game like us,” Hamlin said. “They style of defense we play, it just comes with the game. When they call pass interference, we just try to keep our corners level-headed and get ready for the next play.”

Kenny Pickett has had an excellent season passing the ball under first-year head coach Mark Whipple, and that continued on Friday, with a pair of touchdown passes and 232 yards through the air.

But maybe more impressive than his passing ability this season has been Pickett’s toughness. He was injured with a hard hit in the UCF game, but came back to play and led his team to a last-minute, game-winning scoring drive despite being so hobbled that he had to miss the following game against Delaware.

Friday, on the opening series of the game, Pickett was slammed to the turf four times in six plays, one of them the same kind of bone-crunching hit on the unforgiving turf-over-concrete surface at the Carrier Dome that ended the season of Pitt starter Max Browne in 2017.

Pickett took a trip to the locker room and backup Nick Patti started to warm up on the sidelines, but once again, Pickett returned and led his team to victory.

“That guy’s like a linebacker out there,” Narduzzi said. “He’s relentless, he’s going to fight for his football team, and he wasn’t coming out of the game, I can tell you that. He shows a lot of courage.”

“It’s easier said than done, but that comes with the job,” Pickett said. “There’s times you’ve gotta sit there and take shots. I think Coach Borbs did a great job talking with the line. We were communicating all game, trying to figure out what they were doing, just trying to slow them down. … They were a handful for us tonight.”

Pitt’s ground game has been a work in progress this season, and it’s been a work that’s been hampered by injuries to some of the Panthers’ best ballcarriers. Junior A.J. Davis missed the team’s last three games with an undisclosed injury while freshman Vincent Davis played on Friday with a cast on his right wrist.

But A.J. Davis returned in a big way on Friday, earning his first career 100-yard game on the ground, and more importantly, helping to salt the game away late with a key first down while Syracuse needed a stop to stay in it.

“We had to lean on the running game a lot towards the end of the game,” Davis said. “We wouldn’t have done it without our hogs. Our hogs put their foot down and drove and we got a first down every time.”

To have the corners in press coverage on that 4th and 25 late in the game as opposed to rushing 4 and dropping 7 in an umbrella zone is inexusable – awful play-calling by the D-coord.

They were in zone.

Alan, would you say the defense is more susceptible to those explosive plays like Cuse had in the 3rd? When our guys are pressing and miss a tackle, it looks like there’s less help to clean up the play.

The defense sure has been exciting to watch, good and bad.

Please rethink the use of vicious on the hit by Paris Ford on DeVito. It was shoulder to shoulder and DeVito was stretching for extra yardage. I think of Mike Dikta’s “nice hit” as appropriate.

It was clean, but it was certainly vicious.

Will there be a situation when Narduzzi take Pickett’s helmet from him like Baber’s did to DeVito on Friday. I thought that showed a lot of class. The kid looked like he had gone a couple of rounds with Muhammad Ali.