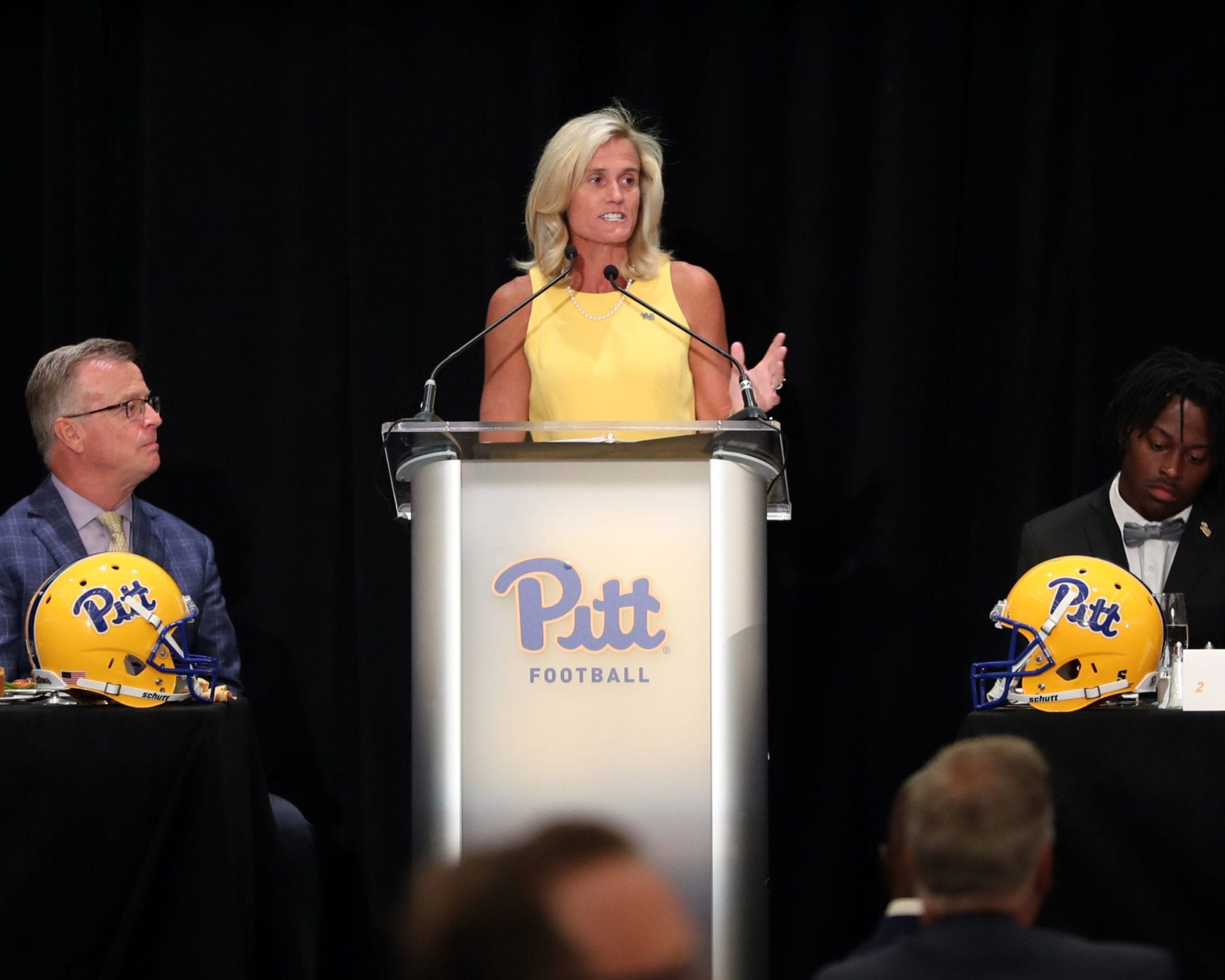 DETROIT — Pitt athletic director Heather Lyke met with the Pittsburgh media on Thursday before the Panthers’ appearance in the 2019 Quick Lane Bowl, and though much of the conversation was centered around the football team, Lyke did touch on some other topics.

• After a poor showing in the 2018-19 Learfield IMG Director’s Cup, Pitt is off to a much better start in 2019, with the football team earning points with a bowl win and the volleyball and men’s soccer team earning NCAA Tournament bids.

“I think it’s absolutely headed in the right direction,” Lyke said. “We haven’t turned it. It hasn’t transformed. But it’s turning and transforming in a really positive way.

“Last year, even our women’s soccer team, they’d lose by five goals. This year, it was a one-goal. They’re this far. (gestures) Next year, they’ll be in the tournament. Men’s soccer, they lost to the reigning national champions in the tournament. Obviously, women’s volleyball is poised to do really great things having our starting setter back and there’s a number of key things headed in the right direction. I’m really pleased.”

• Lyke also seems pleased with the first full football season under the belt of the fledgling ACC Network, even though notable holdout Comcast continues to be a major issue for fans in Pittsburgh.

“I thought it went extremely well,” she said. “Obviously, the coverage that our teams are getting, the behind-the-scenes, the stories that are being told, I think our fans appreciate it. Obviously, we have Comcast still holding out. That’s a key turning point for us and eventually, we’ll get there with Comcast. I have a lot of confidence in ESPN and our conference office to get that deal done.”

Lyke said she thinks as it drags on, more Pitt and ACC fans may make the switch to ditch Comcast for another provider.

“Just the other day I got a text from one of our donors who said, ‘I’m done. My kids came home for the holidays and they got us changed on our cable company. We had Comcast. I’m done with them.’ If they’re not going to carry it, they want the ACC Network. I think people who had it appreciated it.”

Lyke also didn’t exactly sound optimistic about Comcast getting onboard before the 2020 football season.

“The timing is tricky,” she said. “It’s really sort of outside of our control. They’re pushing to try to get it done before next football season.”

Comcast’s omnibus deal with ESPN and other Disney properties doesn’t expire until 2022, meaning the cable giant has little incentive to make a deal with the sports network now. ESPN is a co-owner and managing parter of the ACC Network.

• The Quick Lane Bowl was a relative financial success for the Detroit Lions, who operate the bowl, with an announced attendance of 34,765 setting a new bowl record there.

But it wasn’t due to much help from Pitt. Of a 4,100-ticket allotment, Pitt sold only about one-quarter, with many fans choosing lower-priced tickets from the bowl or the secondary market instead of buying through the team, leaving the Pitt sideline relatively empty compared to the Eastern Michigan crowd.

“It was interesting to learn about the ticket sales,” Lyke said. “We have an allotment obviously. The bowl has an allotment. Eastern Michigan has an allotment, and the stadium [does too]. But there were some pretty good deals out there on the secondary market, as well. I know a lot of our fans did not necessarily buy from our allotment. Those who did probably paid a little bit more just because of how it was structured. So we’re really grateful for that.”

Of course, a big part of the reason Pitt fans stayed away was dissatisfaction with the way the 2019 season ended and being twice passed over for higher-rated bowls by the selection process. But Lyke didn’t have any concerns about the way that part of it played out.

“It’s not as if anyone doesn’t want Pitt,” she said. “That was very promising in many ways. They’d say, ‘We’d love to have Pitt. We have to see how things shake out.’ You just don’t have a lot of natural control over it. It’s very television driven, very conference-office driven and bowl driven.”

• The changes to the Petersen Events Center in advance of the 2019-20 basketball season have been generally well-received by the public and Lyke echoed those thoughts as well as stressing the importance of investing in the facilities for Pitt’s top-tier programs.

“I think we’ve had really nice positive comments about it,” she said. “I’m really pleased with the scoreboard, with the court, the way our donors are situated, allowing most importantly, the Zoo to be seen on national television and for people to really see what it’s like to play in the Pete, I think is awesome. I know Coach Capel and our staff really appreciate the loyalty of our fans and changes that have happened. It’s a major investment and a major improvement into the game day atmosphere. I’m pleased with it and excited. We’ll continue. We always have to invest in football and basketball. Those are critical pieces to the operation of our department.”

As far as the team on the court, Lyke fairly guaranteed a more successful season than Capel’s first while saying it has already improved its standing league-wide.

“We’re going to be better than last year, I’ll tell ya that,” she said. “It is a young team, and they’re still figuring a lot of things out. I don’t think anyone’s going to take us lightly, and that’s the reality. I think some people in the past have thought, ‘Oh, this is a win.’ And I don’t think you can do that. This team does not give up. It is tough. They might not be as big as some of the other ACC teams, but they’re tough and talented. Coach Capel is going to have them prepared, and his staff is very connected. I think this team has some real potential.”

• Lyke was honored before the game as a former EMU athletic director and Michigan softball player and as one of five female Power Five athletic directors, she was selected to be a part of Michigan Task Force for Women in Sports.

Keep pumping up Lance, the wbb was in woeful shape. He’ll get it done if he doesn’t get discouraged. H2P.