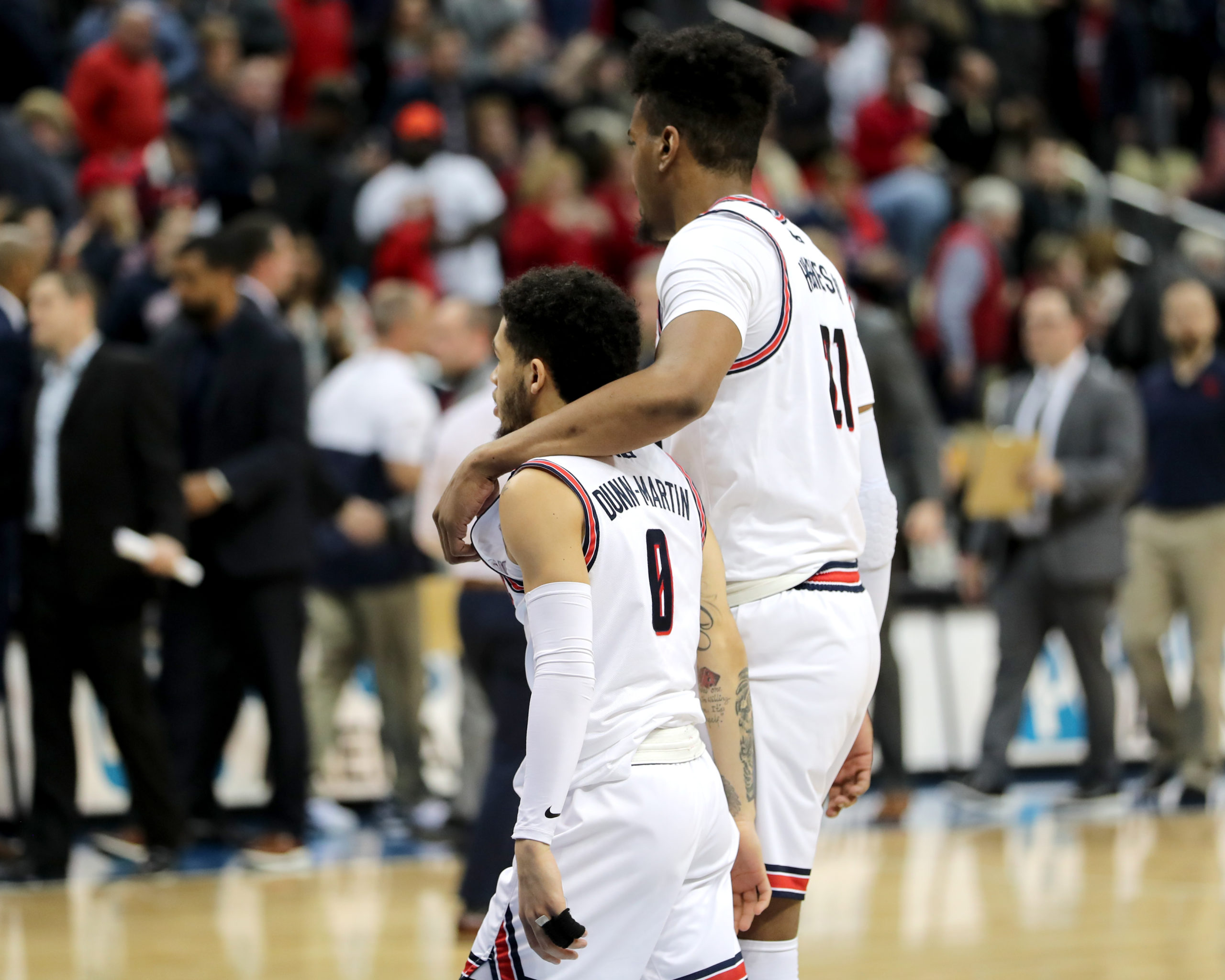 PITTSBURGH — Down 19 points early on in the second half, Tavian Dunn-Martin could have pouted in the huddle, but instead, the redshirt junior guard was determined.

With Duquesne’s largest home crowd of the season at 7,001, Dunn-Martin refused to allow his team to lose by 20 points and end up like a lot of Dayton’s opponents have this season.

Yes, Dayton is ranked seventh in the country and Duquesne entered play losing two road games after a week off, but none of that mattered.

Dunn-Martin of course made three-point shots, four to be exact and consistently encouraged fans to make noise. Even when Obi Toppin was shooting one-in-one, Dunn-Martin repeatedly waved his hands in an upright motion before an official saw what was going on.

“He gives us great energy,” Duquesne forward Marcus Weathers said. “He came into the huddle really fired up. We’re going to go out fighting. He gave us a huge spark and got the crowd really involved.”

Yes Duquesne ultimately fell short, falling 73-69 but the comeback did allow the team to hang its metaphorical hat on fighting until the end, even if the result was not a consistent one.

“We got too uptight about things,” Duquesne center Michael Hughes said. “Once we settled down and got the nerves out, we played the right way. Those minutes where we were lacking we have to figure out.”

Duquesne coach Keith Dambrot admitted that he has to be encouraged about the result so his team can continue to develop. After all as Dambrot put it, his team got “smacked in the mouth, knocked down and wobbled 35 times and came back and made it a game”.

“I’ll never be happy when fans are happy with a loss at home,” he said. “In order for us to take the next step, we can’t lose to Dayton at home, regardless of if they are ranked seventh.”

In defeat, Dambrot saw his Dukes play competitively against the clear top team in the Atlantic 10 and a potential Final Four team but desires his team to be competitive on a much more consistent basis.

Upon being asked if his team is currently championship quality, the short answer appeared to be not yet because the consistency is simply not there.

When Dayton coach Anthony Grant entered for his press conference, it was clear that a man who does not smile much was certainly not going to flash one within the next few minutes.

Grant was most frustrated by his team’s uncharacteristic 17 turnovers and 15 offensive rebounds conceded, which allowed Duquesne to take 10 more shots.

He was so frustrated in fact that he mentioned it three separate times while on the podium, stating his team needed to mature more.

The message was clearly sent down to the team as sophomore forward Obi Toppin described things from a Flyers perspective.

“We know we are going to get the best from every team just because of the recognition we have,” said Toppin. “We have to be composed and just play to the best of our abilities. Today we did not do that and it showed at the end of the game. We got a w and we can learn from that. We just got by and we’re not okay with that as a team.”

WAS THE DEFENSE GOOD?

Quite honestly, the answer to this question depends on what you value.

If you value field goal percentage defense, the answer is a clear no, as Dayton, one of the best offenses in the country shot 59.2% from the field.

Those who simply look at Toppin’s numbers and see a double-double with the 22 points coming on 9-of-13 shooting from the field, will view Duquesne as not getting the job done.

Toppin did defer a bit to his teammates and could have scored over 30, but some of it also was Dayton’s lack of success early on in getting him alley-oop opportunities.

Jalen Crutcher really was a key to Dayton’s success and though he picked up four fouls, Trey Landers had a nine-point first half which was crucial.

Dayton otherwise was held in check. Really Ryan Mikesell had some looks but committed five turnovers and Duquesne appeared to take advantage of him being an undersized forward, which kept him off the court for more time than usual.

“We just wanted to stay longer for the sit ins especially where Obi was coming in,” Weathers said of Duquesne’s defensive plan. “We didn’t want him to get a clear lane for a dunk and use his athleticism to energize his guys. For the most part we did a pretty good job. We just came out sluggish in the second half and it took a lot of energy to try and come back and make it a game. We should’ve been ready off the jump.”

Much like Duquesne itself, Dambrot viewed the defense as inconsistent. He was pleased because Dayton, the team with the best assist-turnover ratio in the Atlantic 10 was far from that Wednesday and when it mattered, the Dukes applied pressure.

Of course the one time Duquesne was not getting whistles, it had nine all game, it needed to foul to extend the game, so Duquesne had to give three fouls before Toppin even went to the line.

Still, Dayton shot below its normal clip on two-point shots and took six less free throws than Duquesne, though it buried all seven.

So did Duquesne play good defense? Some stats will lean towards yes, while others do not back that up.

Duquesne did make one noteworthy change and that was giving Austin Rotroff his first start of the season over Mike Hughes.

Rotroff played 7:11 of the game action, all of which came in the first half.

Dambrot himself admitted that was a bad answer but the best one he had. When pressed further, he stated that he had to make sure he was a good parent or he would not feel good about himself.

While Dambrot was coy as to the reason, PSN has learned from multiple sources that starting Rotroff was a clear message sent to Hughes.

The decision was made based on Hughes’s actions  during a Saturday afternoon loss to Massachusetts. When Hughes fouled out, his expressed displeasure with an official who responded by assessing a technical foul.

UMass sank three of four free throws in that sequence and though the Minutemen already led by double digits, that was not the point. For one thing, Duquesne had it to within five points with 42 seconds left and though it was a one point difference, it is a play that Dambrot has consistently expressed displeasure over.

There have been precedents for this decision and this will ultimately join that list, which shows Dambrot is sticking to his principles.

Whether or not it mattered is up for interpretation as Hughes led Duquesne with 19 points playing just over 31 minutes. It is possible this lit a fire for an already motivated Hughes who knew he was facing a ranked team and that Duquesne just came off two road contests it would rather forget about.

It seems this was a message sent in terms of the privilege being a starter and it would be expected that the starting lineup should return to normal Sunday against La Salle.

A CALL TO ACTION

To put a small damper on the 7,001 attendance factor, it is not as if they all were Duquesne fans. Dayton travels extremely well as it is but with how special this season has been to date and a relatively short four-hour car ride to Pittsburgh, the Flyers were well represented at PPG Paints Arena.

On a night where several Duquesne student-athletes were honored for achievements in the classroom, several students attended the game, never left and provided noise all night long.

Now the test is to see not only if this same noise and presence can continue Sunday against La Salle but beyond as Duquesne has five home contests remaining on the schedule.

“Now the question is can we consistently get that amount of people to a Duquesne game without winning every game,” Dambrot said. “Our student support is much improved, now we have to get those alums to come to a game. Which comes first the chicken or the egg? We’ll never be as good as we should be until everyone comes to the game. It’s hard on players when no one is at the game.”

Postgame Reactions From Duquesne’s Loss to No. 7 Dayton