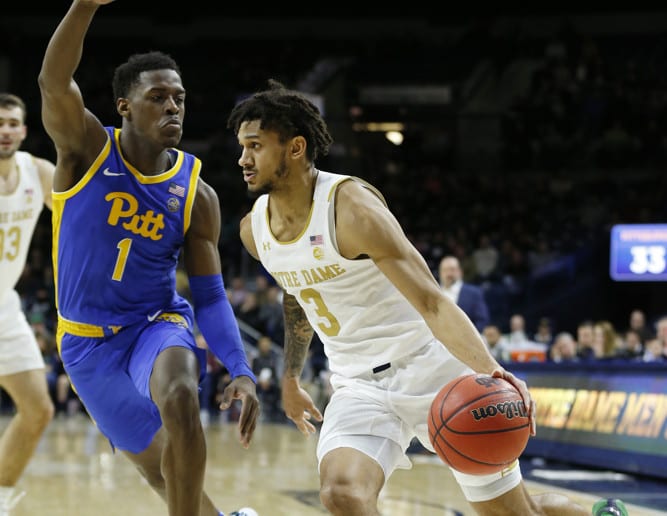 SOUTH BEND, IN. — On a snowy evening in South Bend, Pitt’s basketball team failed to weather the storm that was Notre Dame’s high-powered offense on Wednesday night.

The Panthers led by as many as six points midway through the first half but couldn’t keep up the scoring for 40 minutes, losing their seventh ACC contest of the season, 80-72.

But the game wasn’t nearly as close as the score might indicate. The veteran led Irish controlled much of the game against the young Pitt squad.

For the first time in the past month, Pitt seemed to have run out of juice and never seemed to have enough scoring options to match Notre Dame and coach Mike Brey’s free-flowing offense. Pitt was forced to fall back into a zone during the second half because of its defensive struggles.

Notre Dame also played zone for much of the game, and for the second straight game, the Panthers showed their inability to create consistent offensive flow against it. Even though Pitt only turned the ball over nine times and shot nearly 42 percent from the field, coach Jeff Capel will not be thrilled with the offensive effort.

After trailing 42-33 at the half, Pitt showed some spark coming out of the break and cut the Irish lead to five points with two Justin Champagnie 3-pointerss and a bucket in the paint from Trey McGowens. But Notre Dame leading scorer, John Mooney, hit a three of his own to give his team some separation.

Suddenly, it got worse for Pitt. Notre Dame went on an 11-0 run in just under two minutes and grabbed its largest lead at 60-44. That lead eventually got up to as many as 19 points.

Capel probably wasn’t entirely upset with the way his team played for much of the first 20 minutes. The first frame was full of runs, much like the second half, but the difference was Pitt had the biggest one. After falling behind 11-4 in the early goings, they used a 15-2 run to take its six-point lead. The comeback was rallied by causing four Notre Dame turnovers in three minutes of play.

Xavier Johnson carried much of the weight throughout the first half, finishing with 12 points, including 2-of-2 from the 3-point line.

But the roles reversed quickly after that stretch, and the Panthers turned it over four times themselves, and Notre Dame went on a 9-0 run of its own. The Irish shot 7-of-13 from beyond the arc in the first half.

Pitt was led by Champagnie, who scored 16 of his team-high 20 points in the second half. Johnson put in 17 points, five rebounds, and four assists.

Notre Dame was led by T.J. Gibbs, scoring 21 points on 5-of-8 from the 3-point line. John Mooney added 17 points and ten rebounds.