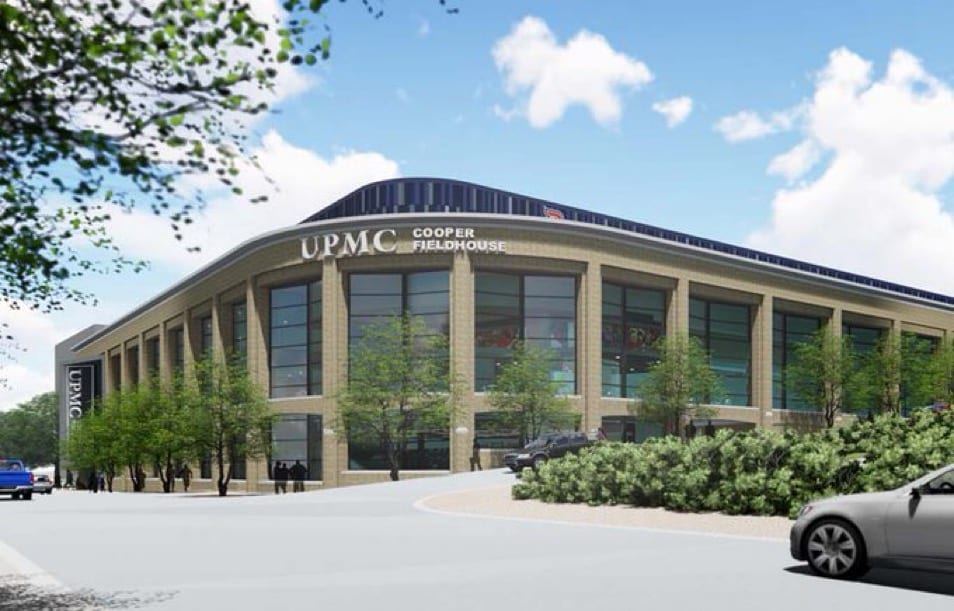 PITTSBURGH — The coronavirus has certainly had its impact across the sports world as everything has taken a pause a process that becomes even more refined as Pennsylvania Governor Tom Wolf recently made a detailed list explaining businesses that were considered essential or non-essential.

As Duquesne Athletic Director David Harper stated in a Monday afternoon phone interview with Pittsburgh Sports Now, construction and work on the UPMC Cooper Fieldhouse has come to a halt for an unknown period of time.

“Every day we’re shutdown, is another day we’re behind,” Harper told PSN. “We just have to be methodical with our planning and thinking. If we have to open later, we’re going to have to open later. It is totally out of our control and then once we’re able to get back and get to construction, we will and once we know what that date is, we will set a timeline and we’ll adjust.”

“The bad thing is this is something we were very focused on and the progress was great and to see it come to a halt is a little disheartening, but at the same time we’re used to being out, so if it’s delayed whether it is a couple weeks or a couple of months we’ll adjust. It is what it is and you can’t change the circumstance, you have to adjust and we’ll do our absolute best for those young men and women to compete and win.”

On Oct. 23, 2018, Harper held his press conference introducing the UPMC Cooper Fieldhouse to the Duquesne University community and expressed then that several donors had graciously stepped forward and that neither university nor tuition dollars would be used for the project.

An animation depicting Duquesne's plans for the UPMC Cooper Fieldhouse, which will stand on the current site of the A.J. Palumbo Center.

During the phone call, Harper doubled down and stated that the previously mentioned funding model remains intact, though donors would be reached out as part of Duquesne building relational capital. The first focus would be to make sure the donors were doing okay.

“The biggest thing we want to check in on is that we had so many generous donors to the project and different things and for some of them, this may effect their ability to give, you don’t know,” said Harper. “Over time, if they figure out what is going on and we see things come in, we’ll extend some deadlines for people. Obviously you have season tickets and things of that nature, but you think about those things, those are not top of mind.“

”Right now that is the health, welfare and safety of everyone, adapting our roles, working remotely to make sure we take care of our teammates, staff and families. This will play out, but the important thing is we’ve got to get this project done, so once it comes back online, we’ll be chugging away. It won’t have any ‘stoppage due to financial reasons’.”

Given the current delay, Harper did acknowledge that the potential is there for Duquesne to look into playing volleyball and basketball’s non-conference slates at other venues.

There will be adjustments to be had as the Pittsburgh Penguins will have to adjust if/when the 2019-20 season continues and further more if the campaign is cancelled if the 2020-21 season will be further delayed or impacted. Additionally, several concert and event dates which will need to be rescheduled as well.

Of course from Duquesne’s perspective, the best case scenario is that the UPMC Cooper Fieldhouse will be ready in the fall or at worst in time for basketball’s non-conference slates, but having gone through the travel and communication with these venues, there is at least a working understanding.

“We’ve got a process where we are working together,” Harper said. “We’re blessed that we went through it once, so it’s kind of a catch-22. We’re very disheartened that this is slowing down and we’re keeping hope alive that it will open on time, but if it doesn’t we’ll have a plan.”

”One thing we can do and have done with some of our scheduling is having more road games in men’s basketball. We’ll have more true road games than we did last year and have another neutral event that we’ll have this year that will provide some relief on the number of dates in non-conference season. We know for certain what the conference season will look like, so that gives us some certainty.”

Currently there is a lot of unknown going on in the world and Duquesne certainly is aware of that, but now that steps have been taken to make sure that remote learning can be successful for student-athletes, there is time before school resumes in person for the fall semester.

Whether the UPMC Cooper Fieldhouse will be ready in time remains to be seen, but Harper knows that some point, what has been thought of and desired for years will become a reality.

“When we get in there, it will still be a great day,” he said.