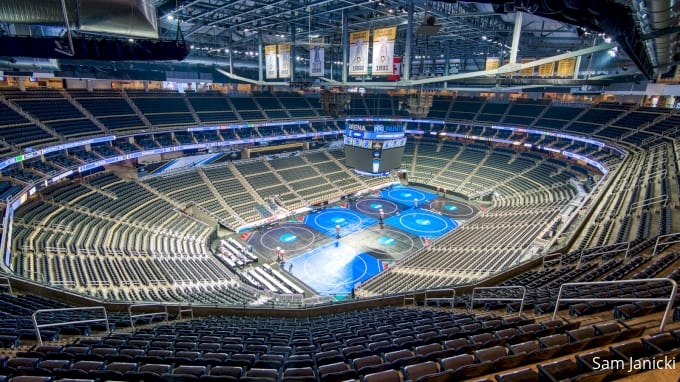 The excitement surrounding the 2020 NCAAs – the pinnacle event in every college season – was palpable. For the first time in the history of the sport, the event was to be held in an NFL stadium – U.S. Bank Stadium – home of the Minnesota Vikings.

This enclosed venue – which mirrors a Viking ship – has a seating capacity of 66,860 for football, and 72,711 for the 2019 NCAA Division I men’s basketball Final Four. These seating capacities are more than three times that of typical basketball/hockey arenas that have hosted NCAA Division I championships for the past few decades. Thus, more amateur wrestling fans would have had the opportunity to witness the event live than ever before.

Equally exciting, for the casual college wrestling fan that is, it looked like the team race for a title would be closer than it had been in quite some time. The famed Iowa Hawkeyes’ program (and possibly others) would have a legitimate chance to dethrone the Nittany Lions of Penn State, who have dominated the sport over the last decade.

Since 201l, one year after Iowa captured its last team title, Penn State has been unparalleled in the combat sport – winning eight of the last nine team crowns. But the 2020 team race between Hawkeyes and Nittany Lions was expected to be fierce – and likely fall in favor of the Hawks when all was said and done.

However, on March 12, 2020, just a day after brackets were released, those feelings of anticipation, excitement, and utter jubilation among athletes, coaches, and fans for the matches to come fell flat – the same way opponents usually do when hit with Jordan Burroughs’ signature double-leg takedown.

NCAA President Mark Emmert released a statement to cancel all remaining winter and spring NCAA championships, including wrestling due to growing fears of the COVID-19 pandemic.

In the months since that fateful announcement, the wrestling community, the broader sports ecosystem, and the world at large has been changed by the aftereffects of this global pandemic that has consumed our lives lately.

The sport of wrestling (at every level) has not been immune to these various struggles and hardships. At times, resources have been sparse, entire seasons were cancelled or postponed, standalone mega-events like the 2020 Olympic Games were dropped, even a top-25 college wrestling  program, Stanford – which  had multiple NCAA All-Americans and title contenders on its roster – cut their program  in July.

Times have been tough for wrestling. However, as we enter the new year and the condensed 2021 high school and college wrestling seasons continue getting under way, its certainly worth reflecting on some of  the positive and noteworthy developments  that have happened within the sport even during this challenging, virus-riddled 10-month stretch.

In true wrestler fashion, the sport, like many of its individual athletes, has proved relentless and resilient.

Here are some of the feats the sport has seen since COVID-19 brought grapplers all across the globe to an abrupt stalemate last March:

With respect to individual accomplishments, two names come to mind instantly in Dan Gable and Spencer Lee – who have both earned some exemplary honors in what was a tumultuous 2020.

Probably the biggest individual accomplishment in the sport last year, Dan Gable received the Presidential Medal of Freedom from President Donald Trump on December 8 2020. Gable is the first wrestler to win this medal.

Watch the full presentation of the Presidential Medal here.

As a competitor, Gable is a two-time NCAA Division I national champion, a world gold medalist, and an Olympic gold medalist. He was only the third wrestler to have ever been inducted into the United World Wrestling’s Hall of Fame in the “Legend” category, in 2012.

As a college coach, Gable led the Iowa Hawkeyes from 1976 to 1997. During that span, Gable’s teams compiled a dual meet record of 355–21–5. He coached 152 all-Americans, 45 national champions, 106 Big Ten Champions and 12 Olympians, including eight medalists. His teams won 21 Big Ten Conference championships, and 15 NCAA Division I titles.

The Waterloo, IA. native also has the distinction of serving as the head coach for the U.S. Olympic Team and the World Team on three separate occasions.

Today, at age 72, Gable is still one of the biggest activists and advocates in the sport.

His achievements (as a competitor, coach, and sport ambassador) render Gable worthy of an award meant for a person who has “made an especially meritorious contribution to the security or national interests of the United States, world peace, cultural or other significant public or private endeavors.” Thus, he is the newest Presidential Medal of Freedom honoree, one of the highest civilian honors in the U.S.

Alongside Gable, Spencer Lee, the reigning two-time 125-pound NCAA champion grappler for the Hawkeyes, has further etched his name in the laurels of college wrestling folklore recently by winning two prestigious awards of his own: the 2020 AAU James E. Sullivan Award and the 2020 WIN Magazine/Culture House Dan Hodge Trophy.

The AAU Sullivan Award has been presented annually since 1930 to the most outstanding amateur athlete in the United States. Lee was named co-winner of the award in April with Oregon women’s basketball player Sabrina Ionescu.

As for the Hodge Trophy, college wrestling’s version of the Heisman Trophy, is presented to the nation’s top college wrestler every year. It was deemed that Lee met that standard in 2020 during his junior campaign.

While Lee’s junior season didn’t end with a third NCAA title due to the aforementioned cancellation, it almost certainly would have if Lee had been afforded the opportunity to compete.

In 2020 Lee put together the most complete season of his collegiate career. His efforts were downright Herculean and Lee was simply unstoppable. And, statistically speaking, Lee’s numbers were jaw dropping.

Lee finished the pandemic-shortened 2019-20 season with a record of 18-0 at 125 pounds. He was named Big Ten Wrestler of the Year after winning his first Big Ten championship with a fall, technical fall and 16-2 major decision in the finals. For the season, Lee scored bonus points in 17 of 18 matches and outscored opponents, 234-18.

Spencer Lee celebrates win in the fourth round of the NCAA Tournament — March 22, 2019 David Hague/PSN

“There is no controversy on who the Hodge Trophy winner was in 2020. That shows the dominance,” said Iowa head coach Tom Brands to Darren Miller of hawkeyesports.com earlier this month. “In other years there have been times where somebody feels they were left out. This one was without a doubt.”

Having won both the AAU Sullivan and the Hodge Trophy Lee is in rarified air.  Lee is just the fifth wrestler in the history of the award to be recognized. He joins Bruce Baumgartner, Rulon Gardner, John Smith and Kyle Snyder as past amateur wrestling award winners. However, Lee is the only of those five fine wrestlers to also have a Hodge Trophy on his resume.

Smile if you are the only person EVER to win both the Hodge Trophy and the AAU Sullivan Award#Hawkeyes #FightForIowa pic.twitter.com/s6b7oY36AP

Moving away individual instance of recognition, various wrestling media outlets, teams, and other non-profit organizations deserve a round of applause for their efforts to not only provide fans the opportunity to watch wrestling throughout the pandemic, but also providing a platform for athletes to compete when they otherwise weren’t able to.

While it is impossible to appropriately thank and acknowledge everyone for their respective contributions, FloWrestling, Nittany Lion Wrestling Club, Pittsburgh Wrestling Club, the Hawkeye Wrestling Club, Beat the Streets – Chicago, Wrestle Like A Girl, and so many others went above and beyond and deserve a shoutout of sorts.

Yes, there is a women's match! 🤼‍♀️
@JPeg63 vs @thelaurenmason
Nov. 24th on @TheRokfin at 8pm ET
Presented by @NittanyLionWC

These outlets helped organize, run, and ultimately stream live wrestling events during a turbulent time – a time when there was very little sport (not just wrestling) being played, seen on TV, or even streamed at all.

Additionally, given the success of these events, I would not be surprised if similar events don’t become a mainstay even in the eventual post-coronavirus era. Ultimately, events like these are what help promote, grow, and popularize an otherwise niche sport. Simply put, the more exposure the sport receives, the better.

Wrestle Like a Girl is a nonprofit organization that sits at the intersection of wrestling, gender equality, and social good with a focus on strategic programming, advocacy, education, and research. The entity, founded in 2016 by Sally Roberts, a former elite wrestler and Combat Veteran, has been a shining star in the youth wrestling space in 2020. Their efforts, even during a pandemic, to further grow the sport and provide women and girls access to women’s wrestling have been other-worldly.

The organization’s goal – getting girls high school wrestling sanctioned as an official varsity sport in all 50 states and the District of Columbia by their respective state high school athletic associations – wasn’t slowed down in 2020.

In 2018, the number of states that recognized girls wrestling as a sanctioned sport was six. Today, that number of sanctioned states has ballooned up to 28, including more than five states that have either fully sanctioned the sport in 2020 or have put a plan in place to begin doing so by the end of the 2021 calendar year.

At the NCAA Division II and NCAA Division III levels, women’s wrestling was approved as an emerging sport. Per the NCAA, this status acknowledges the following: Girls wrestling now has a 10-year period to become a championship sport unless it can be demonstrated that steady growth has occurred during that time. To become a NCAA sponsored championship sport, at least 40 NCAA institutions sponsor the sport at the varsity level. Currently, the number of NCAA sponsored girls’ programs has eclipsed 30 and is nearing the necessary numbers to give female collegiate wrestlers a shot at an NCAA title.

Planning began in February to launch a Community College Women’s Wrestling National Championships in 2021 and in June of this year, women’s wrestling was granted emerging sport at the division I level and is expected to have NCAA Championship status by 2023.

To be able to see this much growth in women’s wrestling within a year is impressive in its own right. But, when you acknowledge that these advancements were able to be accomplished under pandemic conditions, it is simply remarkable.

We should be thankful that we got to watch some of the best wrestlers in the world – including Olympic Gold medalists Jordan Burroughs and Kyle Snyder, Adeline Gray, a five-time world champion, other elite wrestlers like Cox, David Taylor, Kyle Dake and J’den represent the U.S.

While wrestling was surely dealt some devastating blows in 2020, the sport also accomplished a lot last year that it should be thankful for – especially now that we are two weeks into the 2021 college season and roughly two months away from the 2021 2020 NCAA Division I Wrestling Championships in St. Louis.

No. 12 Pitt Wrestling Stays Ranked in All Major Polls after Lehigh Win