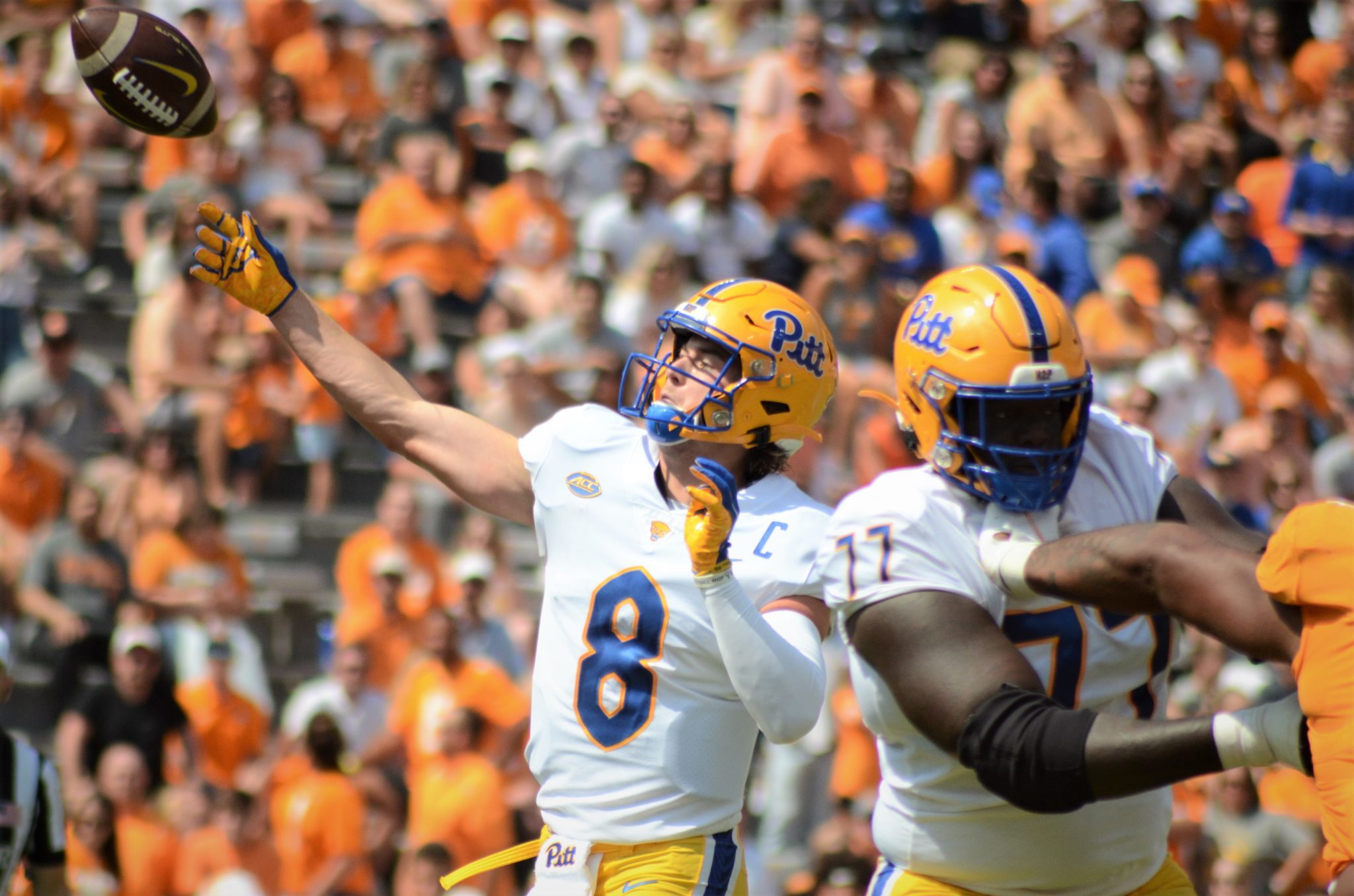 KNOXVILLE, Tenn. — Kenny Pickett accounted for three touchdowns as Pitt sweated out a Tennessee comeback big to win, 41-34 for the Panthers’ first road win at a non-conference Power Five team since 2008 at Neyland Stadium on Saturday.

Brandon Hill intercepted Hendon Hooker’s pass with 4:52 to play and Vincent Davis and Israel Abanikanda got Pitt’s beleaguered rushing attack off the mat to run out the clock and preserve the victory.

The play that sealed the win for Pitt. @brandonhill_6 with the interception. pic.twitter.com/al3sCA6lox

Pickett played one of his best games at Pitt, throwing 36 times and completing 24 for 285 yards and two passing touchdowns. He also ran for a score.

But Pitt struggled mightily to move the ball on the ground, gaining a total of 96 yards on 45 carries, 19 of which were from Pickett’s legs.

A number of subpar special teams plays also hampered the Panthers, none more than the fourth offensive play of the game, when Kirk Christodoulou’s punt was blocked by Christian Charles.

Tennessee recovered at the Pitt 2-yard line and scored one play later. After two Pitt 3-and-outs, the Volunteers drove down the field and kicked a 37-yard Chase McGrath Field goal to a take a 10-0 lead.

The Panthers responded with a Pickett touchdown to Melquise Stovall and a third down from the 11-yard line.

After another McGrath field goal, Pitt used some razzle-dazzle to take the lead, as Jared Wayne took a Pickett lateral and thew to Lucas Krull for a 16-yard score.

Pitt’s defense forced a Tennessee turnover when Keyshon Camp drilled Joe Milton III and forced a fumble, but the Panthers could take only partial advantage, settling for a 38-yard Sam Scarton field goal. Milton left the game after the hit and did not return, replaced by Hooker.

Scarton kicked another one from 27 yards later in the second quarter and Pitt took a 20-13 lead, but Jimmy Calloway took an innocent-looking wide receiver screen 44 yards to the house after an A.J. Woods missed tackle to tie the score with 2:16 to play in the first half.

The Pitt 2-minute drill was a success, as Pickett led the Panthers down field and Vincent Davis capped off a 75-yard scoring drive with a 2-yard plunge.

In the third quarter, Pickett called his own number for a 1-yard sneak on a fourth and goal to establish a two-touchdown Panthers lead.

From there, the teams traded scores, with Hooker finding tight end Jacob Warren up the seam for an 8-yard touchdown, Pickett hitting Jordan Addison over the middle for a 5-yard score and Volunteers back Jaylen Wright pushing across the goal line from 1 yard out.

Pitt’s defense held firm, with Chase Pine stopping Wright on a fourth down inside the five, and then after a Pitt punt, Hill coming up with the game-sealing interception.

The Panthers improved to 2-0 on the season and got their first road win against a Power Five non-conference opponent under Pat Narduzzi and first overall since winning at Notre Dame in 2018.

Some bad tackling today, open field ya gotta break down and go for the belt buckle, cost us big time today.

I love Vincent, but he shouldn’t have been in on the goal line plays. That’s terrible coaching and thank god it didn’t cost us the game.

I told you Milton was overrated. His passing was erratic. He has very good speed but refuses to use his size to run over people. Tennessee was better off with Hooker at QB.
Still a few things to clean up for Pitt. Special teams cost us in this game.
Hail to Pitt!

Good win. Defense should improve quickly. Should tackle better. I felt our players looked small, or just me …

They won the game. Not sure about the 58 yard field goal attempt but the bottom line is they got it done.

Why don’t we use the defense that got the INT more???They had wide open WRs all day! We actually had the safeties helping our CBS on that play.. We still got pressure and actually looked like we had the WRs covered for once.
Great win and we ran the ball when it counts, at the end. h2P

Pitt tackling was atrocious but I’ll take the squeaked-out win. Other adjustments such as RB performance need to be made quickly in order to maintain the momentum.

w
Can we ever get an offensive line we got good backs running with no holes.