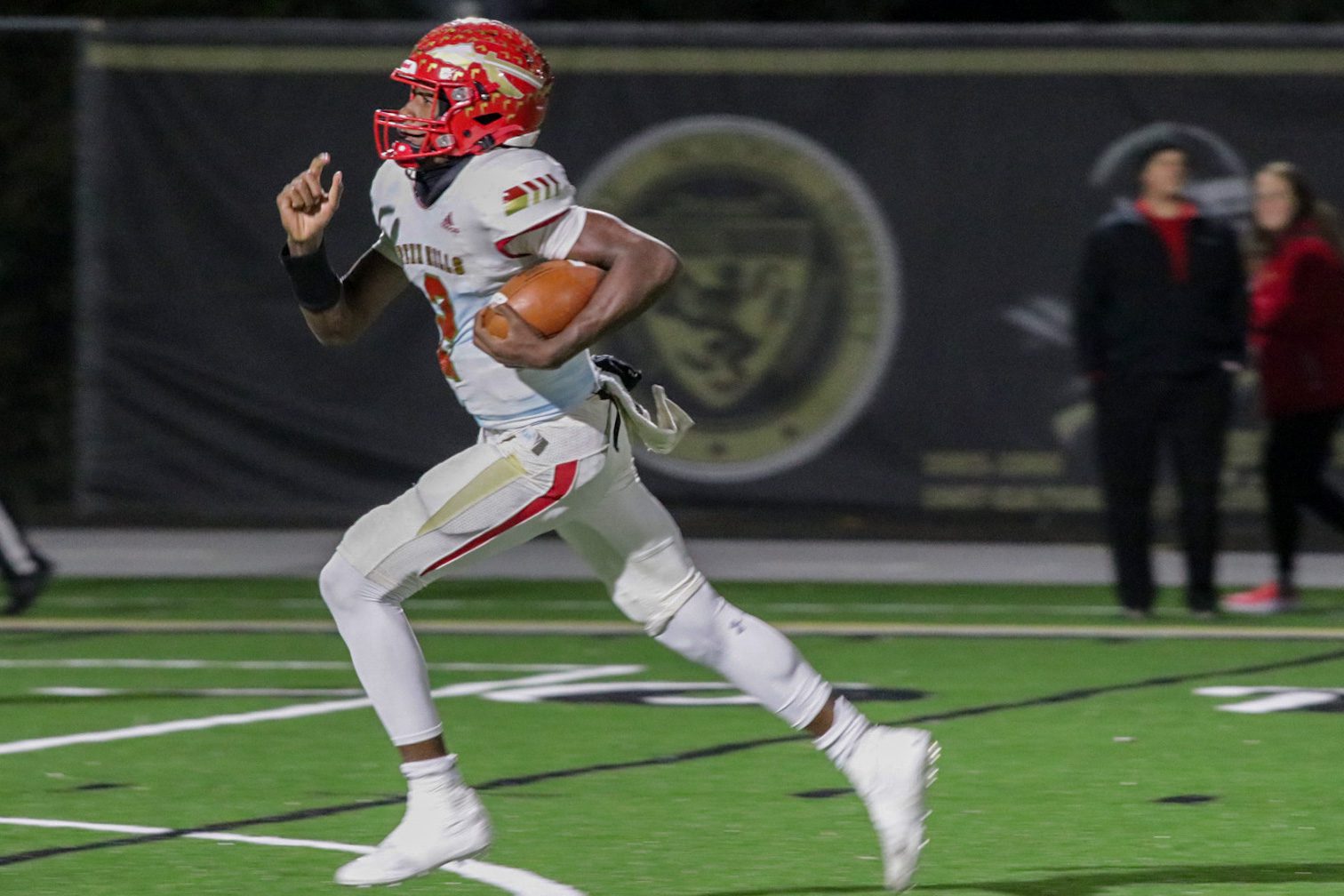 With Gateway’s Birch brothers and Penn Hills’ Duggar brothers taking the field at Antimarino Stadium Friday night, the Duggar brothers, led by younger brother Julian’s two touchdowns, managed to overcome the Birch brothers in a 23-20 Penn Hills win over Gateway — despite a third quarter injury for Julian that left him hobbled for the rest of the game.

A potential game-tying field goal for Gateway went wide at the end of regulation, and Penn Hills escaped with the win.

With the win, Penn Hills managed to avenge a 41-13 loss to Gateway in early September, one of three losses this season, to set up a 5A semifinal contest against the winner of Moon and Woodland Hills next Friday.

Dugger’s incredibly gutsy performance, basically playing on one ankle in the second half, saved Penn Hills from potentially blowing a 17 point lead. Especially when it looked like the Indians might cruise to a victory.

It took a bit of time for Penn Hills to get rolling, following a first possession interception from sophomore quarterback Julian Dugger, but the Indians’ defense clamped down and created short fields for the PH’s offense.

After Gateway was unable to convert on excellent starting field position after sophomore Remy Bose’s interception, Julian Duggar began to take over with his left arm — and his legs, of course.

With solid starting field position of their own after gateway was unable to be capitalized upon by Gateway, Penn Hills turned back to Julian Dugger. And he delivered. It was The Julian Dugger Show on the ensuing PH’s drive came courtesy of well-timed throws and a steady dose of runs. He completed the drive for PH, diving into the end zone from a yard out on the first play of the second quarter.

With the Gateway offense locked into a cycle of three and outs, the Gators’ defense managed to force an incomplete on a 3rd-and-7 from the PH’s 45-yard line, but an unsportsmanlike penalty gave Penn Hills new life. The Indians couldn’t capitalize with a touchdown, but a 30-yard field goal sailed between the uprights to make it a 10-0 game.

Another Penn Hills’ drive starting just off midfield appeared to be shaping up as another scoring drive, but the Gateway defense managed to do just enough to keep Julian Dugger from diving for the line to gain on fourth down. With a momentum swing finally going the Gators’ way, Gateway responded with a turnover on downs of their own deep inside their own territory.

Julian Dugger burst through a hole in the offensive line on the next play, racing almost untouched through the heart of the Gateway defense for a 35-yard touchdown to open up a 17-0 lead late in the second quarter.

The Gateway offense finally found somewhat of a rhythm on their final possession of the first half, fueled by a couple of runs from sophomore Jaquon Reynolds, but with timing slipping away at the end of the half, a pitch to Reynolds just outside the red zone was blown up by the PH defense and the ball popped free. The Indians recovered the fumble, ending the nightmare first half for Gateway with a 17-0 lead.

The second half began with matching punts. However, instead of Gateway going for it on 4th-and-9 near midfield, a pooch punt pinned Penn Hills deep. On the ensuing drive, Julian Dugger, after just avoiding a safety on the previous play, went down with an apparent injury.

Gateway forced a punt from deep within Penn Hills’ territory, but on the ensuing drive, PH sophomore D’andre Cochran managed to pick off sophomore Brad Birch on a drive that began on PH’s 32-yard line. It was the continuation of a long, long night for the Gateway offense.

With Julian Dugger in at quarterback, despite a nice run from sophomore Amir Key, the Gateway defense managed to force a punt. And the Gators’ offense finally flashed their teeth, Brad Birch connecting with senior Patrick Body for a 78-yard catch and run touchdown to pull the Gators within two scores.

While Dugger attempting to come back into the game, Penn Hills was unable to get any momentum on offense, and Gateway was given an opportunity to climb back into the game. Brad Birch put together his best drive of the game, hitting a multitude of receivers and converting a first down with a rush of his own down to the 10-yard line.

With a 3rd-and-11 opportunity at the 11-yard line, Brad Birch fired a perfect pass to brother Brett Birch to cut the Penn Hills’ lead to just three points with just over five minutes remaining in the game.

After another Penn Hills’ drive that was unable to gain any traction, Gateway set up at their own 42-yard line. However, with a 3rd-and-14 potentially leading to giving PH another chance, a huge conversion from Reynolds not only converted the first down but gave the Gators a chance to pull ahead.

A few plays later, Brad Birch lofted a beautiful ball to Body, who managed to spin his body in time and pull in a deep touchdown pass to give Gateway their first lead of the contest. However, a missed extra point kept the lead at just three points with 2:54 left in the game.

With the ball at their own 41-yard line and 2:50 to work with, Penn Hills had a chance to take the lead on a potential game-winning drive. With a hobbled Dugger behind center, he dashed across midfield to give PH a key first down, and he followed it up with a huge deep ball to senior Chase Barney to set up at the three-yard line.

And Key raced into the end zone from just a couple of yards out to retake the lead for lead for Penn Hills with just 40 seconds left and essentially salt away a 24-20 win.

And the game-tying kick from Gateway went wide at the end of regulation.

Gateway’s season has come to an end with the loss while Penn Hills advances to the WPIAL 5-A semifinals against the winner of Moon/Woodland Hills next Friday night.