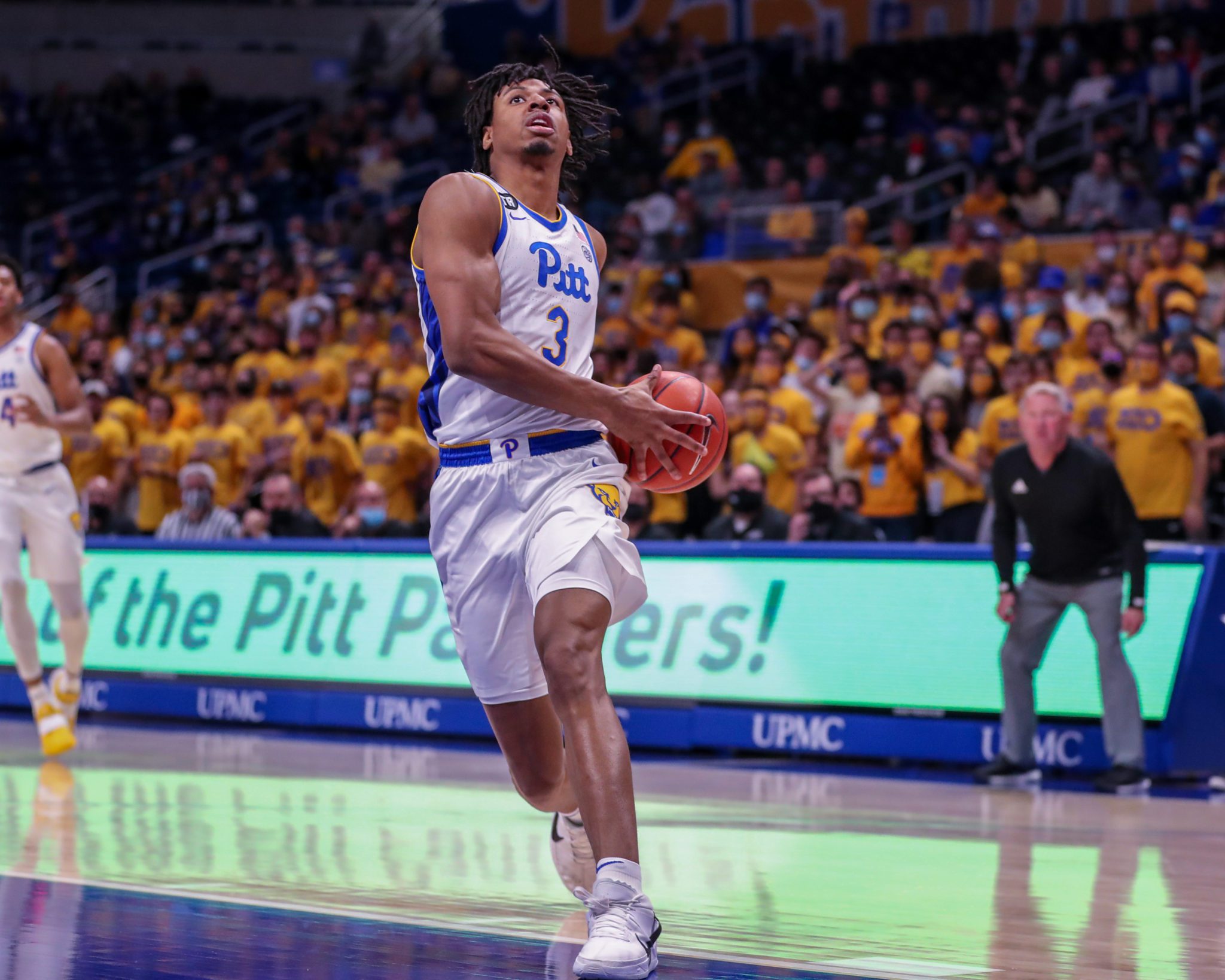 PITTSBURGH — In Pitt’s 63-59 win over Towson on Friday night, it was not Femi Odukale, nor was it John Hugley, who led the Panthers in scoring. In fact, those two were not even in the top three scorers for the team.

The leading scorer was Nate Santos, with a career-high 14. Santos hit four 3’s and two free throws, while also grabbing a team-high 8 rebounds. Tied for second on the score sheet? Dan Oladapo and Jamarius Burton, two more new Panthers, these two coming from the transfer portal, who have started to fit into the rotation and contribute nicely after a few games.

While Santos was a big question mark heading into this season as a freshman, his development has been “sped up” according to Capel and he is looking like he is up for the task of playing 30+ productive minutes a night at the college level.

On the other hand, Burton and Oladapo have both had offensive outbursts at the Division I level in the past at their previous schools, and are now finding their groove at Pitt.

In addition to those three, Pitt also has Noah Collier and William Jeffress, who each scored seven points on Friday, ready to help out on the score sheet when their names are called.

“When your number is called, you step up,” Collier said. “We work the same as them every single day so we know the plays. We got our opportunity and we made sure to take advantage of it.”

While Hugley and Odukale are still averaging the most points per game through the Panthers’ four games, Friday’s win proved to Jeff Capel, his staff, and the rest of his roster that anyone can step up for them on any given night.

As mentioned earlier in the article, the lone freshman on the roster led the Panthers in points and rebounds in Friday night’s victory.

Santos finished with 14 points, with 12 of them coming off of threes, and two coming from the free-throw line. Through four games, he is averaging the fourth-most points for Pitt, at 7.5 per game. He is averaging the third-most minutes on the team at 29.5 per game, and played as much as 37 minutes in the win on Friday. He has also made the most threes on the team so far, with six.

“He’s going to be huge,” Capel said about Santos. “His progression has had to be sped up, because of the situations that we have been in. I think he has done a really good job. We know that he can shoot the basketball. I think he’s gotten better each game defensively. Obviously, to have eight rebounds. To step to the line in his fourth game, his first free throws down the stretch, and make two big free throws, we have a lot of confidence in Nate, and I think he’s going to continue to get better, and again, he comes to work and tries to get better every day.”

What seems apparent through these four games is that Santos is ready to score at a high level, and especially on a team lacking three-point shooters, he will have his chance to average some pretty high numbers for Pitt this year. Whether he is camping out in the corner, where he was hot on Friday, or anywhere else on the perimeter, Santos has shown that he can shoot it just ab

Oladapo is a Key Piece

Once again, Dan Oladapo was as efficient as they come for Pitt as he started his second-straight game and hit every field goal he attempted for the third time in four games.

More impressive numbers for the Oakland transfer, who looks every part up-to-speed and ready to be a main contributor for Pitt. While he doesn’t take the most shots on the team, he picks and chooses and he knows when his looks are good looks.

“Dan was one of the best offensive rebounders in the country last year when he got here, so being around him, just watching how he analyzes the game is definitely a giant help,” Collier said about Oladapo. “That skill didn’t go away when he got here. So, every single day you’ve got to go in knowing you’ve got to box Dan out, you’ve got to watch out for Dan. You want to bring that same energy to him, so it definitely helps bring our level of competition up.”

Two years back, Capel brought in the 30th ranked class in the nation, headlined by Hugley and Odukale. Without question, those two have shown that they can compete at a high-level in college. Jeffress, who was also in the class, has shown flashes of elite athleticism and rebounding ability with offensive skills that have room to grow.

Although those three have looked solid in their young Pitt careers so far, Noah Collier and Max Amadasun were yet to really break out.

After Collier’s strong performance on Friday, the 2020 class is looking more complete and is looking like it will be a strong core for the program over the next two+ years.

“I think our biggest thing is winning,” Collier said when asked about his recruiting class and their goals for the next few years. “Every single day, brick by brick, as coach says, we have to keep stacking, make sure that we get closer to the biggest goal, which is getting to the tournament and being able to represent this city at the biggest stage.”

After scoring just nine points all of last season in a minimal role, sophomore forward Noah Collier was looking to improve this season and play a bigger role for Pitt down low.

“Noah played really well for us early in practice, then he hit a part where he didn’t play as well, and that’s why he didn’t play as much,” Capel said after Friday’s game. “He came to me Wednesday and talked about that. We had a conversation, and I told him, this is what we need from you, this is what you were doing earlier, and this is what we need, and he did that at such a high level today. When he does that, he should be a curveball to the fastball. John is power, is force, is that, he is big, he is strong. Noah should be the opposite. Noah should be speed, it should be energy, it should be above the rim, it should be all of those things, and he did that at such a high level.”

Collier’s role through a little more than one season at Pitt has been backup to John Hugley (or last year, to Abdoul-Karim Coulibaly) and play some good defense in the limited minutes that he’s in for. However, in Friday night’s game, when Capel didn’t like what he saw from Hugley, Collier showed he can do much more than just defend.

In the second half alone, Collier played 18 minutes, made two lay-ups, threw down a dunk, blocked a shot, had a steal, grabbed an offensive rebound, grabbed a defensive rebound.

Collier tough 💪 inside the paint

He completes his and-1 and were tied at the Pete

“Coach tells me to play aggressive and bring a lot of energy to the game every time I step on the court, so that’s what I did tonight, and it worked out.”

Pitt would not have won that game without Collier. The impact he made was substantial. And if he keeps playing like he did on Friday off the bench, Collier gives the Panthers much more stability and versatility down low.

“The last thing I told him when we talked the other day, was that we need him. But we need him that way all the time. So I am really proud of him. I am proud of him that he didn’t put his head down. Look, you don’t know anymore with these kids. You talk to them, you tell them the truth, you don’t know. And I am proud of the fact in that moment that he was ready and he came out and played at a really high level.”

it takes time to build a team an coach capel is doing it his way . Brick by brick to build that foundation for this program. His recuriting class from 2020 is coming together. Rome wasnt build in one day. When kids dont wanna be here or come here thats fine. Dont have to have all 5 ***players. Good example of that is univ. of Baylor last year not 4 0r5* players an won the National Championship.

I can’t believe all of the “it takes time” apologists out there. And this article makes it sound like beating Towson by 4 is noteworthy. This program is a dumpster fire.