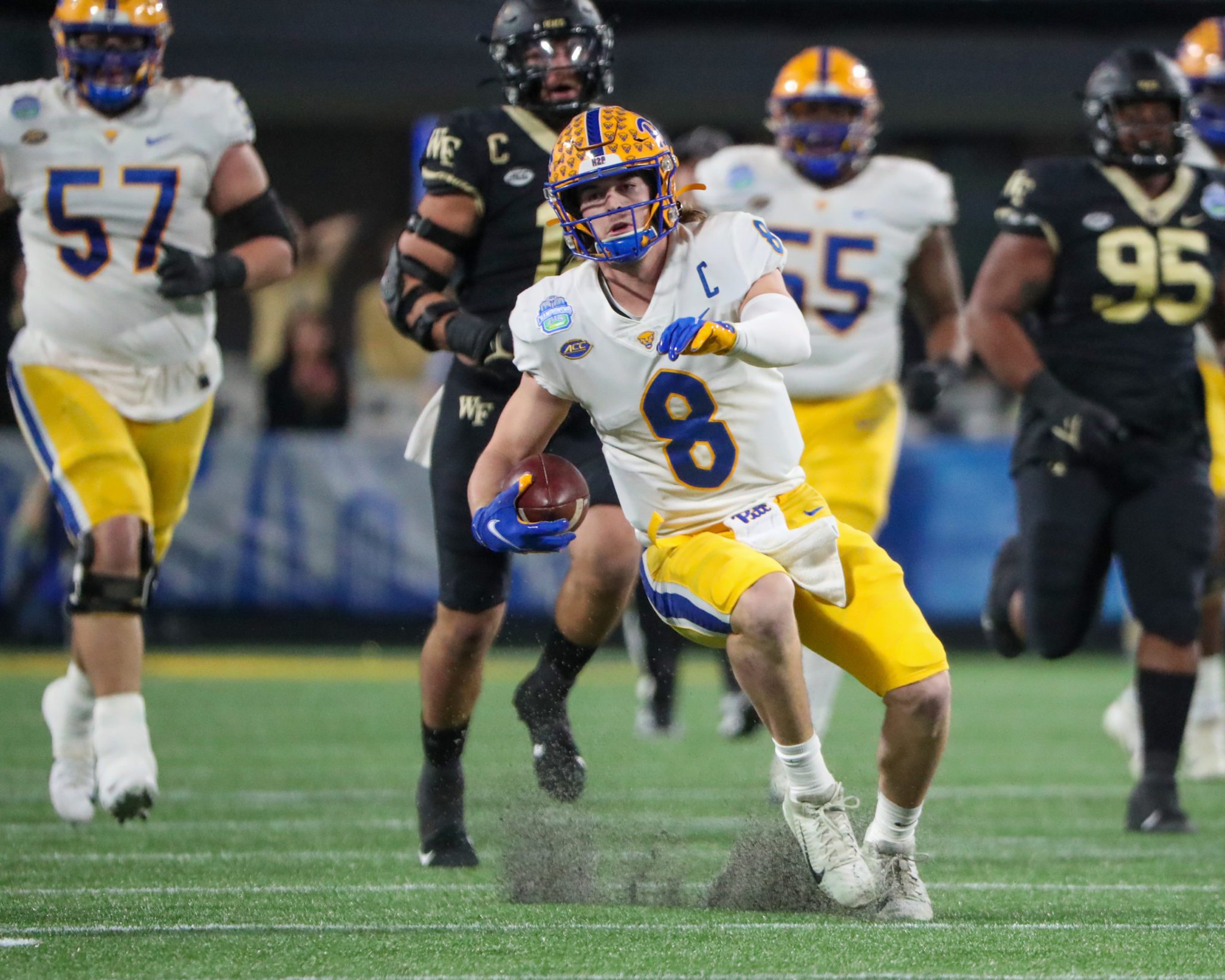 However, Pickett’s passing touchdowns were not necessarily the big story of the night.

Pitt, who received the opening kickoff, was looking for some early momentum offensively. After the Demon Deacons defense forced Pitt to have a third down on its own side of the field, the Panthers needed a play. They got one.

Pickett, being rushed by several Deacons, took off through the middle of the field, with lots of daylight ahead of him. He had the first down secured, and it had appeared that he was slowing down a bit, shifting his energy downwards, and ready to slide an accept a 20-or-so yard gain. However, Pickett quickly pulled right back up, bursted upfield near the sideline, and turned on the jets for 40 more yards, scoring a 58-yard touchdown.

“I have never, ever seen that before,” Clawson said after the game. “You just train your players, as soon as the quarterback starts sliding, you stop. Because you touch him, and it’s going to be penalty. He started his slide, and our kids stopped playing. I don’t think he did it intentionally, if he did, he’s brilliant, but I just think he reacted as an athlete. But what do you tell your players? The quarterback is protected when you start a slide, and there is two guys that could have made a play, and stopped playing because he started the slide.”

According to the NCAA Official Rules, specifically NCAA Rule 4, Section 1, Article 3(r), “A live ball becomes dead and an official shall sound their whistle or declare it dead (w)hen a ball carrier obviously begins a feet-first slide.”

Pickett had found the loophole: a fake slide. He pulled it off, doing something not many people have ever attempted, or seen attempted, let alone in a championship game. The officials let the play go, and let Pickett go 58 yards to the house.

“That is certainly something for the rule book that I think they have to look at and come up with a rule for,” Clawson continued. “There’s no rule for it, so the officials were correct in letting it go. They made the correct ruling for not blowing it dead. But, if that’s the rule, I’ll just have my guy fake knee-ing all the way down the field and really, what do you do? So it’s something that I think the NCAA is going to have to look at. You know, you can’t fake a slide.”

This is a big non-story. There is no rule, so shaddup Dave.

More rules to interpret. Great more judgement calls in the hands of the Charlotte Boys in stripes next fall. Just what everyone needs.

I get it but some are on overkill about the fake slide. The defenders were five yards away at the time so it was a nice move by Kenny. Sure take a look at it and decide for the future but let’s not act like that play in any way factored into the outcome of the game.

Wipe Up The Tears!

Ha ha it is hilarious that you guys are on here desperately defending the legitimacy of the biggest play in your huge win against mighty … Wake Forest. Who has the smallest enrollment (by a mile), the smallest athletics budget and the smallest stadium (barely 31,000 seats) in Power 5 football and has to subsist on 2 and 3 star recruits as a result. Fellas, just admit that an already heavily disadvantaged team got the shaft on a big play – one that would have never worked against a program that actually as Power 5 caliber athletes on defense –… Read more »

Yeah sure nitter. You’re team is 7-5 & your head coach’s record against top ten teams is something like 1-537. Also Joe knew.

Yeah, Go Write Another Letter To Your Daddy Jerry!!! Dickhead!!

Where U At Dickhead?? Still Bobbing On Sandusky’s Shaft??