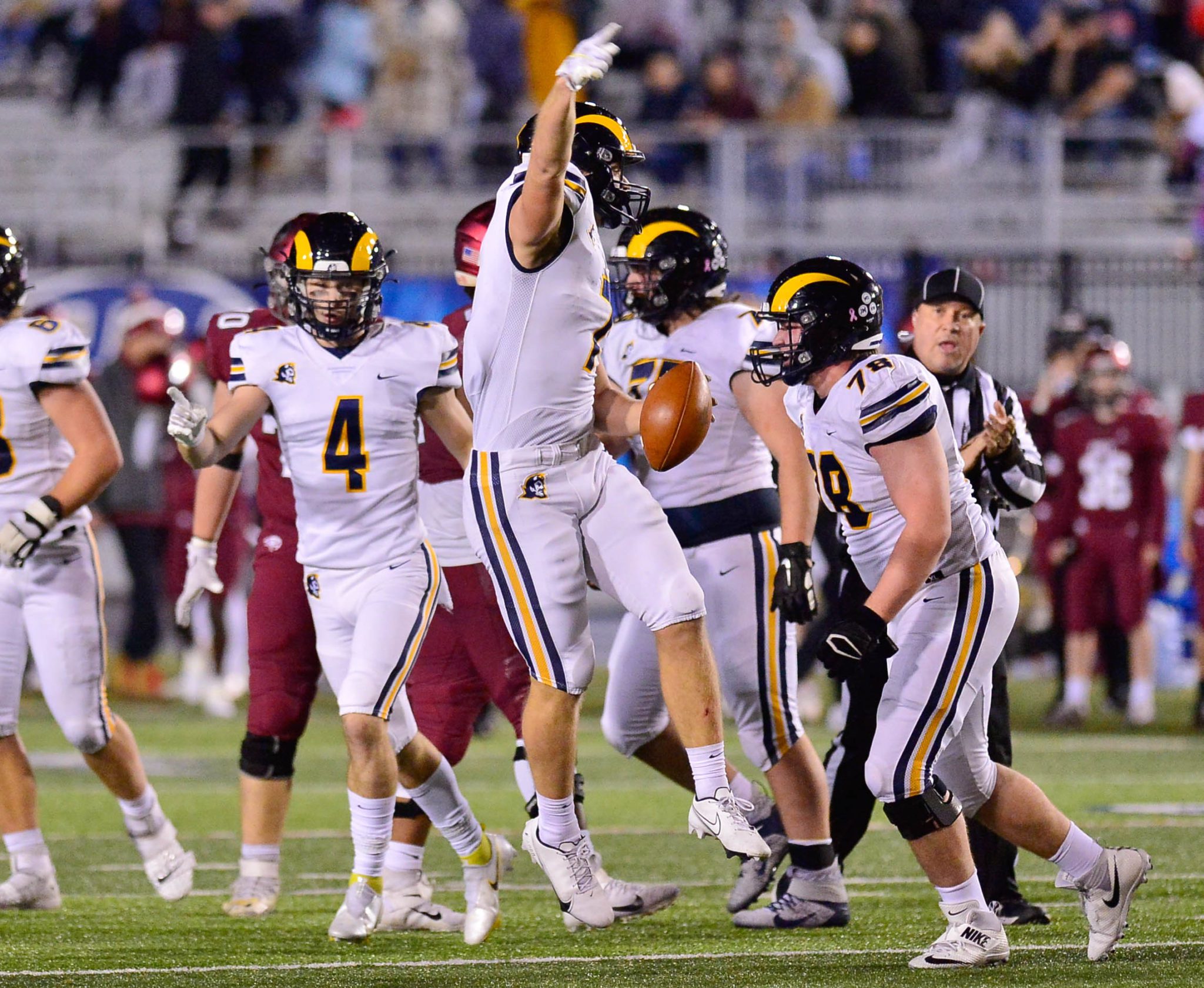 When Alex Tecza eased across the goal line late in the fourth quarter against St. Joseph’s Prep, for his third touchdown of the night, he pushed Mt. Lebanon’s lead to 17 points. With teammates barraging him on the sideline, telling him that the game was over, Tecza made sure to say it wasn’t.

St. Joe’s, a regional powerhouse in the northeast, had won three consecutive state championships, and if any team could make a comeback with a few minutes still on the clock, Tecza said, it was St. Joe’s.

So, Mt. Lebo kept playing, kept hitting hard and kept fighting to knock off St. Joe’s, 35-17, Saturday night at Hersheypark Stadium in the PIAA Class-6A championship game. With a will to win, Tecza said that’s how the Blue Devils clinched the first state title in team history.

“I’m feeling great,” Tecza said. “I’m feeling great for everybody on this team, the coaches and the community. This is the first, obviously, but ever since we started working in January, we knew we would get here eventually — someway, somehow. But truly this season’s been magical.”

Mt. Lebo swept through the WPIAL 6A schedule, knocking off North Allegheny and Central Catholic twice, before embarking upon a potential state championship run. With big wins over McDowell and State College in the run-up to Hershey, the Blue Devils rolled into Hershey Park as heavy underdogs against one of the biggest prep schools in the country. And that didn’t go unnoticed in the locker room.

“It was motivating,” Joey Daniels said of the expected St. Joe’s win. “That was all the motivation I needed to go into this game. I love when people think we can’t do something, and you know, we went out here and proved that we could. At the end of the day, you gotta give it to that team because they gave us a great fight, but we kept faith and we pulled through.”

St. Joe’s, led by top recruit Josiah Trotter, opened the title game in a big way, capping an opening possession drive with a 4-yard touchdown pass to Trotter off a roll out from Samaj Jones. The touchdown was the result of a possession in which the Hawks effectively burned clock and converted key plays while simultaneously converting six points.

While St. Joe’s celebrated a game-opening touchdown, Daniels steeled his resolve on the Mt. Lebo sideline. He knew the Blue Devils needed a score to keep up with an offense loaded with talented playmakers. Mt. Lebo trotted onto the field, and Daniels received the snap. He stepped up in the pocket and fired a quick slant to Mike Biersdorf 15 yards down the field, which was snagged and lugged downfield.

“When I saw (Biersdorf) catch that ball, it was an incredible feeling and I knew that we were going to be in this game,” Daniels said. “We were going to have to fight through all four quarters.”

Mt. Lebo certainly fought. On the next Hawks’ possession, Tommy Boehner ripped the ball out of St. Joe’s Blaine Bunch’s arms and Jack Smith immediately jumped on the ball. A couple of plays later, Eli Heidenreich dashed 13 yards to the end zone, giving the Blue Devils an early lead. If the Mt. Lebo faithful had been loud for Biersdorf’s touchdown, it was indescribable for the Heidenreich follow-up.

Mt. Lebo and St. Joe’s traded punts before a 45-yard rainbow of a toss from Daniels to a wide-open Smith streaking downline the sideline helped set up a third-and-goal from the 5. On a play very, very similar to St. Joe’s opening score, Daniels rolled out and hit Tecza in the flat for an easy touchdown to stretch the Mt. Lebo lead to 14 points early.

St. Joe’s would score again, a 5-yard run from Jones to bring the Hawks within a score, but at the end of the first half, a chip shot field goal sailed wide right into the swirling wind. So with a 21-14 halftime lead, victory was within reach.

However, in three of the first four possessions out of halftime, there were turnovers. Trotter forced a Mt. Lebo turnover on the Blue Devils’ first possession of the second half. But on the next two St. Joe’s offensive possessions, Matt Wertz picked off Jones’ passes.

The Mt. Lebo defense disrupted St. Joe’s offensive game plan all game long, but according to a key member of the stifling defensive effort, it was just a part of playing good football.

Harvey jumped out to a fast start for Mt. Lebo, racking up a couple of sacks and a tackle for loss on the first defensive drive for the Blue Devils. But that just set the defensive mentality for Mt. Lebo, limiting a strong St. Joe’s offensive to just 17 points — with 17 points tying a season-low.

St. Joe’s nailed a field goal in the third quarter to narrow the lead to just four points, and Daniels threw an interception in the Hawks’ end zone on fourth down. With a potential opening for St. Joe’s, the Mt. Lebo defense clamped down, Heidenreich returned a punt down across the Hawks’ 30 and a a Tecza first down conversion inside the 10 set up his second touchdown run of the night. With an 11 point lead, Mt. Lebo was starting to feel it.

“I think everyone on this team knew that we were going to win,” Tecza said. “We were the underdogs to everyone else, but to us, we were coming in here super confident, knowing we were going to win this game. We knew this from January. This team is special, we’ve been doing so well this year, but I’m sure no one here — even in our community — thought that we’d pull out this win. We knew we did the whole way.”

And Tecza’s third of night put the game away, clinching both the state title and the ensuing euphoria felt all the way across the state.

“I can’t even put it into words,” Daniels said. “I mean, I feel like I’m on top of a mountain. This is unbelievable. Our whole township came out for this one, our whole team kept faith throughout the game. That was the whole Mt. Lebanon effort, and we did what we needed to do to win this.”

The roar of the Mt. Lebo fans in the crowd and the pure jubilation from the sideline show just how much that the win meant for everyone in the Blue Devil community — the entire team, the coaches, the community, as Tecza said.

“(This win meant) everything,” Daniels said. “I mean, ever since I was a little kid, I just wanted to be a Blue Devil. And this program has given me everything.”

“It means everything,” Harvey said. “I love Mt. Lebanon football. It’ll always be in my heart.”

However, while this is just the first ever PIAA title for Mt. Lebo, Tecza is confident in the future of Blue Devils’ football under head coach Bob Palko — even if he won’t be the key player anymore.