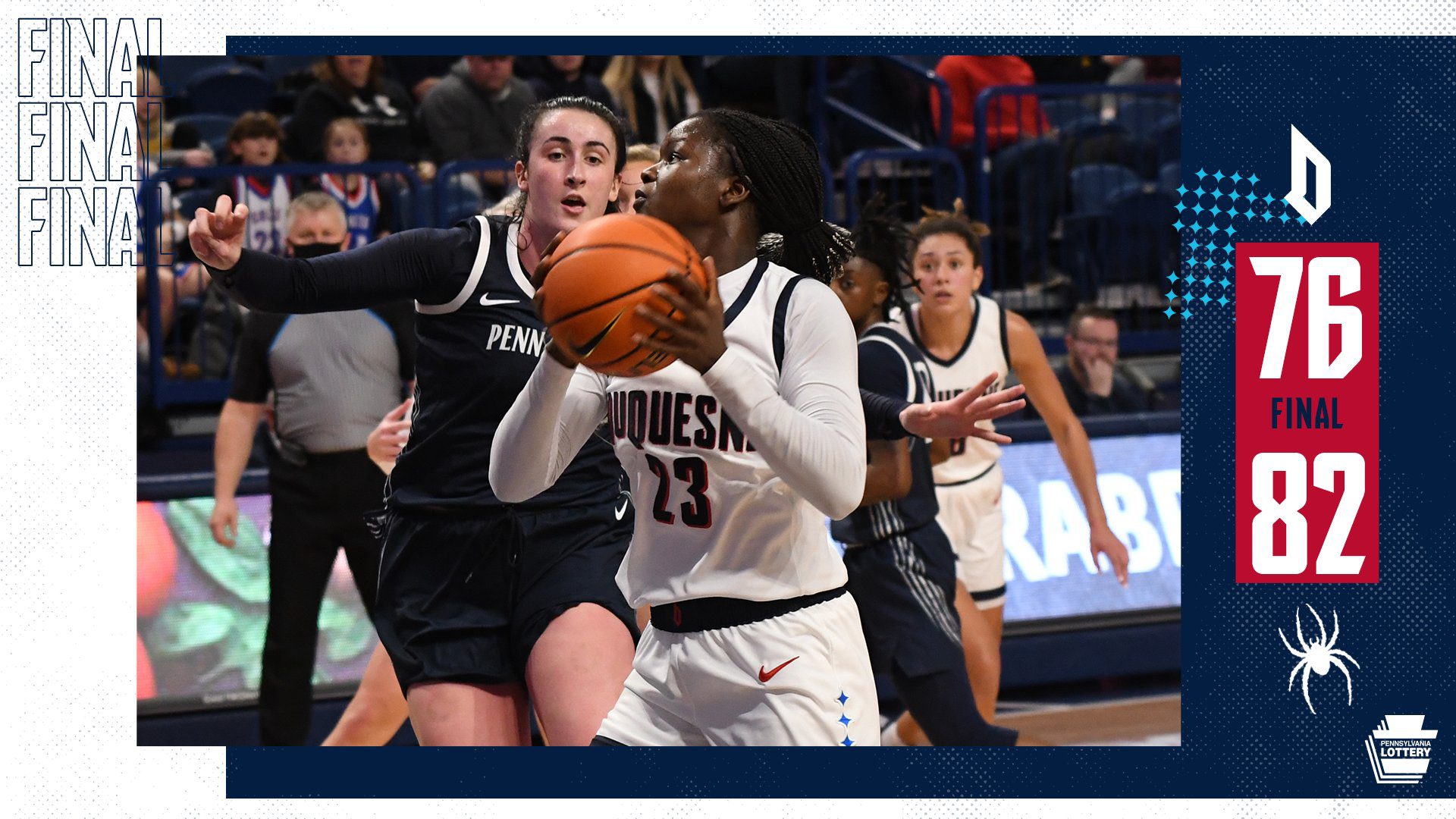 The Duquesne Women’s Basketball Team scored 51 second-half points, but opened Atlantic 10 play on the losing end, dropping an 82-76 game to Richmond Saturday at the Robins Center.

A bright spot for Duquesne (5-8/0-1 Atlantic 10) came with Amanda Kalin’s return to the court. Kalin had been out since suffering a season-ending ACL tear Jan. 3 at Dayton, but paced the Dukes with 18 points, while also playing 31 minutes. Also achieving double figures was Libby Bazelak with her 14 points, while Fatou Pouye scored all 12 of her points in the second half. Megan McConnell achieved 10 points.

Richmond (10-4/1-0 A-10) was paced by Kate Klimkiewicz’s 20 points, which included multiple buzzer-beating shots. Emma Squires came off the bench to score 16 points, while both Addie Budnik and Grace Townsend totaled 14 points.

As a team, Duquesne was playing in its first game since Dec. 18 and that was apparent early on in Saturday’s contest and also after multiple stoppages.

Richmond opened the first quarter on a 6-0 run, as the Dukes were looking for their rhythm. Duquesne allowed Klimkiewicz to drive without much issue and on the next Spider possession, the Spiders guard nailed a three-point basket off a Siobhan Ryan pass.

Duquesne then had multiple looks to get back into the game, but Bazelak missed a layup and Laia Sole missed two close shots, one of which was closely guarded as her teammates were unable to get back into a position to get open themselves. McConnell would use a reverse layup to score Duquesne’s first points of the afternoon, to bring some relief towards its side, cutting the deficit to two heading into a media timeout.

That stoppage slowed Duquesne’s down as it struggled to find that second gear, while Richmond went on a 9-1 run. A late three-point basket from Bazelak allowed for Duquesne to trail by five, but Klimkiewicz found a basket and a foul with one second remaining in the first quarter. Despite missing the free throw, Richmond led 20-13 after 10 minutes.

Neither side could get much going offensively to start the second quarter as it took Duquesne 2:32 to score from the field, with Halle Bovell ending the lull. Duquesne would outscore Richmond in the quarter by one point heading into the media timeout, but the Spiders would close the half on a 10-4 run. During this last 4:54, Duquesne was unable to make any shots from the field.

Richmond maintained that edge in the third quarter, this time using a 10-0 run, extending its advantage to 22 points. When Pouye made a layup, it was Duquesne’s first score in 8:42 of game action. Despite these setbacks, Duquesne refused to surrender the game, instead using it as a rallying point. The Dukes went on a 13-0 run led by Kalin and Pouye’s combined efforts. Pouye’s basket separated the teams by 10 points, though Klimkiewicz, again beat the buzzer, this time on a three-point basket.

Early on in the fourth quarter, Pouye recorded another five points including an open three-point basket, again placing Duquesne behind by 10 points. Duquesne would cut the deficit to eight points on a Precious Johnson jumper. Richmond then caught fire from deep as Klimkiewicz, Ryan and Squires each buried triples, giving the Spiders entering the final media timeout.

Duquesne then scored five points coming off of a media timeout before Squires hit another trifecta which allowed Richmond to briefly go back up by double digits. In the closing minutes, Duquesne continued to battle, trailing by five points with 24 seconds remaining, but could not convert from the field.

Duquesne is presently scheduled to remain in Virginia and face VCU Wednesday at 6 p.m.

Saturday’s contest was supposed to be one of seven Atlantic 10 contests to be held, but due to COVID-19 policies, it was the only game which was played.