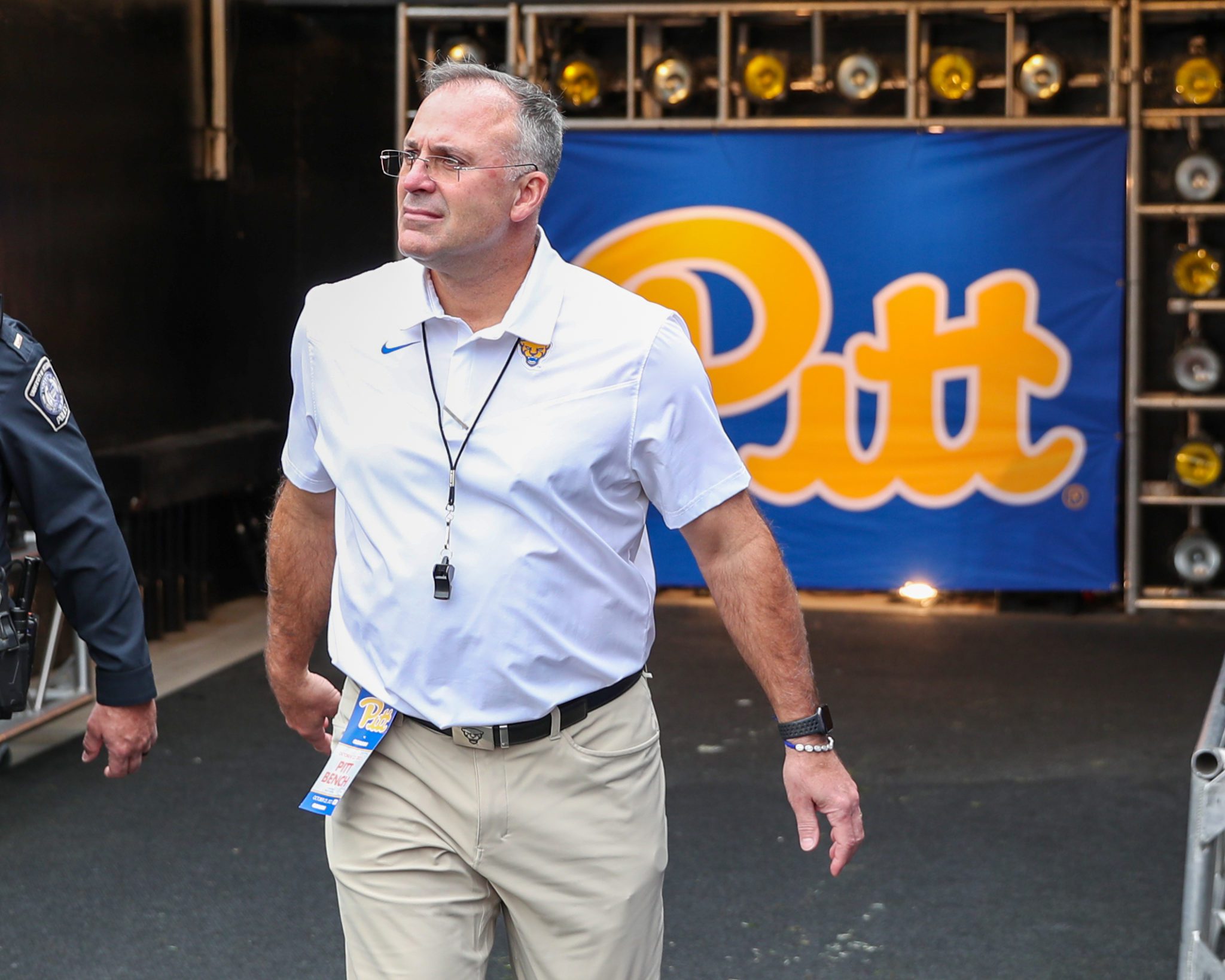 It had been a while since Pitt head coach Pat Narduzzi had any time to sit back and take a breath, but with Wednesday’s Signing Day not netting any new recruits from the class of 2022, he was able to break down a couple of recent developments within the program — and college football.

With a new offensive coordinator and quarterbacks coach now back home in Pittsburgh, a new quarterback being secured after a year-long thought process and the transfer portal impacting recruiting and potentially College Football Playoff expansion, Narduzzi covered a lot on Wednesday.

Frank Cignetti Jr. is back home

After two years spent as the offensive coordinator and quarterbacks coach at Boston College, when Narduzzi gave Cignetti a call about moving back to Pittsburgh, he couldn’t say no.

“He didn’t reach out to us saying, ‘Hey, I want the Pitt job.’ Which is interesting I think a new wave of college coaching now is you gotta go find the guy,” Narduzzi said. “Kinda like I found coach Stacchiotti a couple of years ago, you’re kinda looking for the right fit.”

Narduzzi looked extensively into the offensive coordinator position, talking to 15 different names and digging around to find the best fit, and Cignetti checked all the boxes he was looking for to take over Pitt’s offense in 2022.

“I talked to 15 guys, just kinda digging it up, and found a great, great fit,” Narduzzi said. “A Pittsburgh guy that’s passionate about this city, that has a wealth of background in all kinds of offenses, so we’ll develop a new offense here different than what they did at BC. So, we’ll have our own wrinkles here, it all starts with the players, as far as the style of offense you’re gonna do, what you’re gonna do, how you’re gonna do it depends on who you have in that room.”

While Pitt’s offense in 2022 won’t look exactly like how it did in 2021, Narduzzi said there will be traces of both Pitt and Boston College’s offenses. It’s still a work in progress, but spring ball is still weeks away at this point.

Cignetti’s combination of being a great, Pittsburgh guy, having the necessary character that Narduzzi was looking for, and having a vast wealth of football knowledge across the collegiate and professional level helped him stand out among the other options.

“It starts with his energy and knowledge. … First thing you’re looking for is good people,” Narduzzi said. “If you don’t have good people, you have problems. And we’ve improved this building, we’ve improved this staff with coach Cignetti hiring. So, it’s great people, family guy, back home, I mean all those things are important.

With Kenny Pickett deciding to return for one final season, Narduzzi knew that Pitt would be in the market for a transfer quarterback to come in and compete once Pickett completed his super senior season for about a year.

“It was a major factor,” Narduzzi said. “Our plan all along was to get one. So, it wasn’t like after the season, we said, ‘Hey, let’s get one.’ That was our plan back, at this time back last February. We’re not going to take a high school quarterback. There was nobody in the ’22 class that we were like, ‘We want that guy.’ Didn’t think it was a great year quarterback-wise.”

While Slovis was Pitt’s top choice all along, honing in on him early in the process, there were three options that Narduzzi looked at it. And with the fluidity of the transfer portal, it led to some tough interactions for Narduzzi in the process.

“We were full steam ahead on three guys,” Narduzzi said. “And unfortunately – and fortunately, we got the guy that we wanted, the No. 1 guy – but we actually had two other guys that tried to commit prior to, and I had to say, ‘Slow down, we’re waiting.’ Which is a hard thing as a coach because you want to wait on that guy, that guy wants to come, but that’s your No. 1 guy. And that was a rough week, just kinda holding off and trying to make sure we got the guy we wanted.”

However, with Slovis now in the fold, Pitt’s quarterbacks’ room now consists of Slovis and Nick Patti, who will compete for the starting spot come the Sept. 1 Backyard Brawl against West Virginia to kick off the 2022 season.

Slovis committed to Pitt before Cignetti’s hire, but with Slovis putting his faith in Narduzzi and Pitt, Narduzzi rewarded that faith by keeping Slovis — and Patti — in the loop during the search for a new offensive coordinator.

“Probably as eager as Kenny Pickett was when we recruited him,” Narduzzi said. “Kenny Pickett was another guy that we recruited without a coordinator or quarterbacks coach. To me, there was that faith that he had and that trust that we’d get the right guy. I kinda kept (Slovis) and Nick Patti in the loop as far as what was going on with that hire. They had talked with him as well.”

It was National Signing Day on Wednesday, and while Pitt didn’t add to its 2022 class, the current class was one of the smaller ones in recent history for Pitt. And while some may look at that as a problem, Narduzzi sees it in another way.

When he walked out to Pitt’s first meeting in the spring, he saw a group of largely the same players that just won the first ACC Championship in program history. With a handful of younger guys entering the fold, they supplement a large group of veteran players — along with the older transfer additions.

Pitt’s scholarships were largely taken up by returning players, which led to the smaller class of high schoolers. There aren’t unlimited scholarships, with the limit set back at 85 scholarship players, so scholarships are a valuable commodity. And it’s led to Pitt being forced to make decisions based on the available resources.

“Shocky, all along was going to be a senior, walked on Senior Day,” Narduzzi said. “And back last February, last March, Shocky said he was moving on. So, what did we do? We said there’s a scholarship we’re going to recruit with. … But the day after signing day, Shocky text me and said, ‘Coach, I’m thinking about coming back.’ And I’m like, we don’t have any scholarships left. That’s what you get into.”

With COVID-19 and NCAA guidelines factoring into the current landscape of recruiting, it’s a new process for everyone.

The College Football Playoff expansion is a hot topic in the world of college football right now, and Narduzzi said the ACC is all for it — but there’s a lot that still needs to be discussed and figured out.

“Every coach in the ACC, the commissioner, wants to have a 12 team playoff,” Narduzzi said. “We would have been in it. … But some of these things need to be answered, we need to have a – I think the commissioner says 365. They look at the calendar, and he’s been vocal, our coaches have been vocal.”

Narduzzi pointed to name, image and likeness deals, the amount of games in a season with a 12 team playoff and more is needing to be looked at and discussed before anything is likely to change with the current playoff format.

A possible way to accommodate a possible increase in games, in Narduzzi’s eyes, would be to increase the scholarship cap to 95. With players already sore and aching after 12, 13 or 14 games, his hopeful solution would be to add more scholarship players across the board.