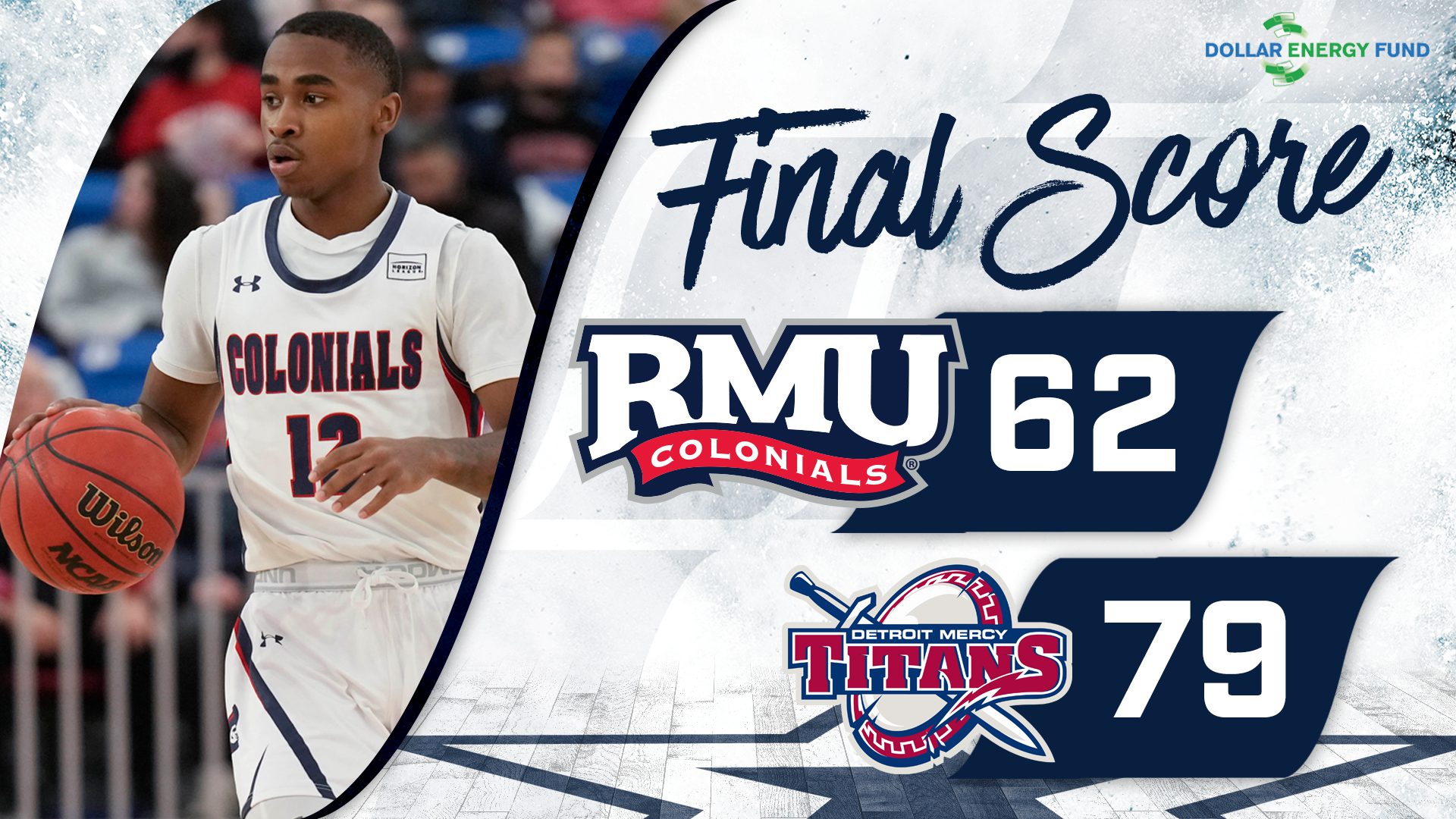 Inconsistency has plagued Robert Morris men’s basketball since entering the Horizon League two years ago and has remained a factor ever since.

RMU shows multiple spurts of life during games, especially at home, but could not come up with the necessary answers to pass Detroit Mercy’s latest test.

The two teams met for the first time this season after a New Year’s Day matchup in Detroit was canceled, with the Titans (10-11, 7-4 Horizon League) leaving the UPMC Events Center victorious 79-62 over the Colonials (6-18, 4-11).

The Colonials exploded out of the opening tip to earn an early 10-6 lead before a Madut Akec three-point place signaled in the first media timeout only seconds later.

Detroit Mercy quickly chipped away at the slim lead but a fantastic half-court pass from Kahliel Spear for a Brandon Stone layup showcased RMU’s effective passing to start the game.

RMU pushed the advantage to 14-9 with exactly 12 minutes remaining and was taking advantage of Detroit Mercy’s defensive sets.

Stone was impactful defensively in the paint protecting the basket and was a factor in the Titans shooting only 28.6% over the first 10 minutes.

The action picked up only moments later as Kam Farris was called for a foul attempting to block a Kevin McAdoo layup. Farris was also issued a technical foul as he and McAdoo had extra words for each other fouling the whistle.

“I thought we got off to a good start, had some good energy to start the game, got some really good shots early,” head coach Andy Toole said. “Then, can you sustain your effort… we certainly weren’t able to do that.”

All of a sudden after the confusion, Detroit Mercy took the lead by a few possessions and took a three-point lead (21-18) entering the under-eight timeout with 6:31 remaining in the half.

Farris stopped the bleeding of a 9-0 Titans run with a contested layup on the right block. Detroit Mercy grew its lead to 27-20 with four minutes left and all the success RMU built up in the first 10 minutes had gone to the waste side.

RMU was sloppy with the ball, especially the last five minutes, and did not create enough movement on offense to stay a few possessions behind to end the half.

Matt Mayers hit two free throws inside the final minute but was answered quickly by another Davis triple.

The Titans were on top 37-27 to close out the half heading into the locker room.

Detroit Mercy improved dramatically shooting down the stretch, collecting a 44.4% overall mark and 7-for-7 at the free-throw line.

Davis led all scores by a massive number, scoring 18 points on 13 shots and two made foul shots.

Michael Green III totaled six points for RMU as seven of eight players receiving minutes added to the score sheet. Jaron Williams had five along with four from Stone, Spear, and Mayers.

Detroit Mercy controlled the pace once action resumed and looked more in sink than the Colonials.

An unreal move from 6-foot-8 Willy Isiani helped the big man move past two RMU defenders and pile on for the Titans.

That spectacular play helped spark a 47-31 lead for Detroit Mercy with 16:32 remaining in the game.

“These guys are too good to give them those kinds of opportunities,” Toole said. “We weren’t able to rally ourselves.”

Farris and Cheeks hit back-to-back threes to help make it happen entering the under-12 timeout trailing 53-42.

RMU looked out of shorts on both ends following the break. It didn’t help having Davis sink a contested three in Spear’s face to spring the Titans to eventually take a 61-42 lead.

That was the score with less than eight minutes left after Stone traveled in the paint following a steal by Spear to earn the possession back.

RMU had no answers for Davis and the attention drawn to him opened the door for other contributors.

“Sometimes I think we get sad,” Toole said. “Sad doesn’t really help us much. I’d rather mad, frustrated, does that frustration fuel you to go harder, do more, talk better, be more detailed, crash the glass, pressure the ball, all the things that can help you turn games around.”

The Titans moved into cruise control the rest of the way and maintained an insurmountable point differential.

Two dunks by Stone and Spear attempted to spark the RMU faithful but was too little too late despite over five and a half minutes remaining.

Farris and Cheeks did all they could to bring the Colonials back within striking distance of knocking the lead under 10 points, but Detroit Mercy had an answer for every RMU mini-rally.

The visitors carried a 72-53 score to the final media timeout and controlled the entire second half, every allowing Robert Morris a window to sneak through.

The Titans finished off the Colonials for a 17-point win led by a game-high 26 points from Davis.

“Does anyone watch him (Davis) warm-up?” Toole said. “I don’t know if you should say this as an opposing head coach, I love watching him warm-up because the dude doesn’t miss a shot. I almost told my wife ‘you should come early tonight and tell my kids to come and watch him because this is how shooters shoot. He’s meticulous about his prep.”

Detroit Mercy out-rebounded RMU 35-22 and a whopping 12-5 in the offensive glass. After being down in the first 10 minutes, the Titans led for 30:05 including a 21 point advantage at one point and 13-for-31 from downtown.