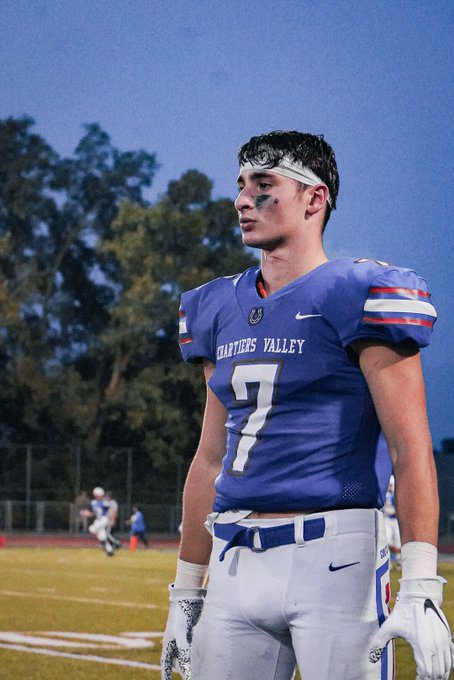 It’s been Abe Ibrahim’s dream to play college football and compete for a Heisman Trophy since he was a young kid, but as little as two years ago, he didn’t think he’d even have a chance to play football at the collegiate level.

Entering Ibrahim’s senior season at Chartiers Valley High School in Bridgeville, Pa., his only offers to continue playing football at the next level were from Division II Slippery Rock and Division III Carnegie Mellon. The 6-foot-2, 200-pound athlete had always dreamed of Pitt for his academic opportunities, but it didn’t appear like the opportunity to play football was in the cards.

Until a breakout senior season as a two-way wide receiver and safety with the Colts.

“Pitt, growing up, was one of the schools I wanted to go to just for academics,” Ibrahim told PSN. “Two years ago, I was not even really thinking about playing football, didn’t think I’d have the opportunity to do so.

“After this year, after a great season, thank God, (Pitt) reached out, (and I) got that PWO,” Ibrahim said. “And I just thought if I’m going to go there for academics, why not do both and play football as well?”

Ibrahim caught Pitt’s attention after a dominant season in which he caught 49 passes for 832 yards and five touchdowns on offense and recorded 83 tackles (41 solo) and a tackle for loss on defense — setting records for receptions and receiving yards in a single season. And Pitt offered him a preferred walk-on opportunity, one that he couldn’t pass up.

“I can’t see myself not playing football,” Ibrahim said. “I couldn’t live with the thought of what if I didn’t play, so I can’t pass an opportunity like that. It’s a once in a lifetime opportunity, and I’d be pretty stupid to pass that up.”

However, Ibrahim wouldn’t have just taken an opportunity to continue his academic and athletic career at Pitt if the circumstances didn’t make sense for him. It just so happened that Pitt wound up being the perfect fit across all facets of his college decision.

“Whenever I went down there and met the coaching staff and everything, no matter where you come from, they all treat you the same — which is amazing,” Ibrahim said. “And when I went on the visit, I felt like I was at home. I know it’s cliche, but that’s probably the one most important thing, feeling like my down there and it was just a great experience.”

With the opportunity to play football and go to school at a place that feels like home, it also doesn’t hurt that home is only about 10, 15 minutes down the road from Pitt either.

Karlo Zovko, Pitt’s assistant director of player personnel, was the main voice in Ibrahim’s decision to come home to Pitt. Zokvo visited Chartiers Valley a couple of times in-person to meet with Ibrahim, and in hearing about Pitt’s program and what the coaching staff had to say about him, a strong bond was developed.

The bond Ibrahim has developed with Pitt isn’t too unfamiliar with the bonds forged during Pitt’s ACC title-winning season. As someone who’s watched Pitt for as long as he can remember, Ibrahim’s own growth isn’t too unfamiliar from Pitt’s growth during the 2021 season.

“It was amazing,” Ibrahim said about Pitt’s ACC championship season. “It just felt like to see where they’ve come from and everything. I remember growing up, watching the Pitt football games and them being alright. Then finally winning that ACC championship is amazing.”

And with Ibrahim’s time at Chartiers Valley nearing its end, and Pitt just on the horizon, he’ll be bringing his toughness, versatility and a desire for continued success into the program.

While Ibrahim’s senior season was a massive success, setting school records and finishing sixth in the WPIAL in receiving yards while playing steadily on both sides of the football, his success came at a cost. In Chartiers Valley’s second game of the season against Belle Vernon, he broke a bone in his wrist — his scaphoid — and played the rest of the season before having surgery.

Still, while Ibrahim is working on his injury rehab and recovery, he’s already planning his role at Pitt. And the Pitt coaching staff has determined that his biggest contribution will come on the defensive side of the ball.

Pitt’s defense operates with smaller, shiftier linebackers that sort of walk the line between linebacker and safety, and Ibrahim — at 6-foot-2, 200 pounds — is a perfect tweener for the position. While he still needs to add weight to his frame, he’s going to play the Star linebacker position in Pitt’s defense — which was occupied by Cam Bright and John Petrishen in 2021.

At just 17 years old, a year below of most of his peers, and coming off an injury rehab, Ibrahim’s path likely points toward a redshirt season. It’s hard to break into Pitt’s lineup as a young player, but with a very, very thin linebacking corps, perhaps there’s room — if he’s able to get into the weight room and fill out his frame over the offseason as he plans to do.

Petrishen led Pitt with three interceptions last season, playing at 6-foot-1, 225 pounds, while still providing coverage across the field from the Star position. Ibrahim feels like a similarly slim frame and ball skills honed as a high school wide receiver should allow him to continue the tradition.

“Playing at wide receiver with my size and ball skills is amazing and translating on defense, I feel like other defensive competitors I have to go against don’t have those ball skills that I have,” Ibrahim said. “And the athleticism at that position. They’re probably more of that bulky side, can hit and everything.”

The jump from Chartiers Valley as a two-way playmaker to Pitt as a linebacker will be a big one for Ibrahim, but he’s one step closer to his dream now.