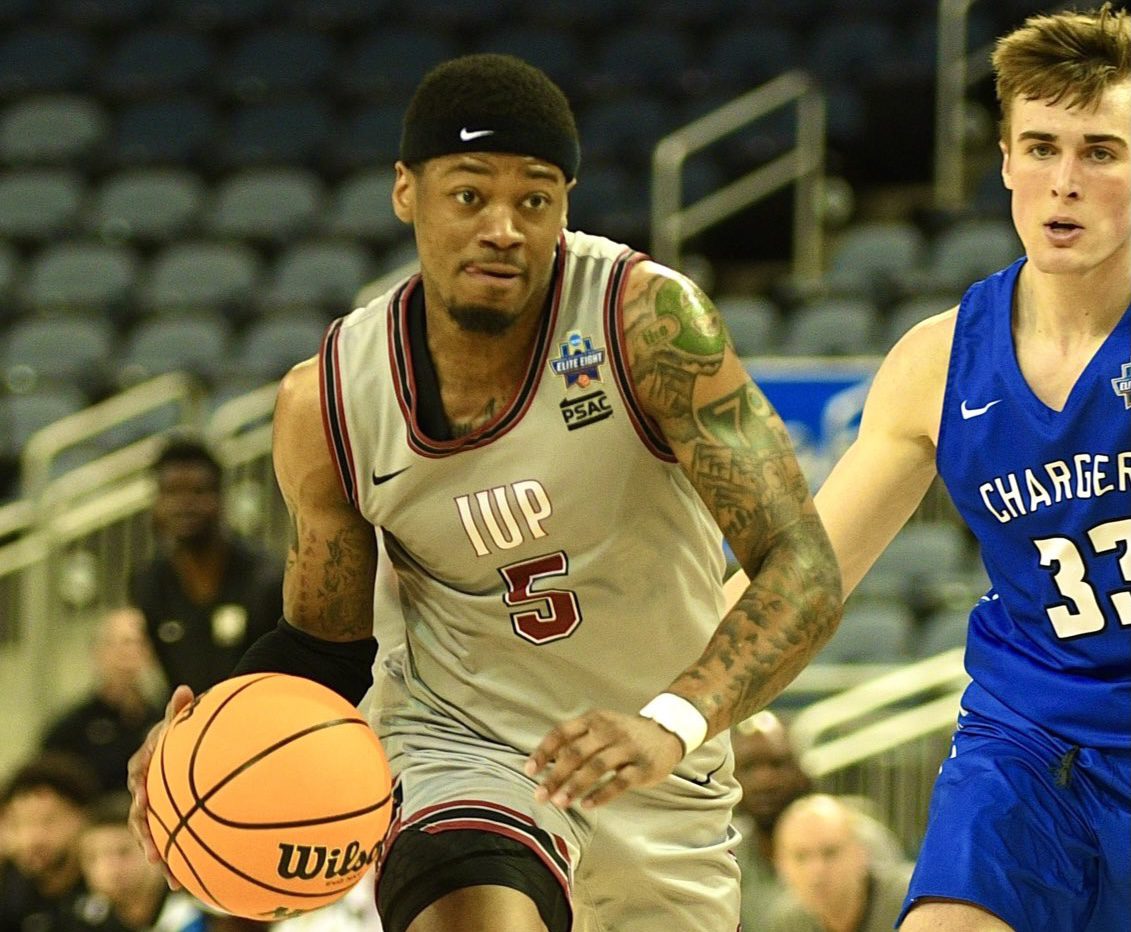 EVANSVILLE, Ind. — As the Indiana University of Pennsylvania men’s basketball team returned to the floor for the second half of their 67-55 win over Hillsdale, it was obvious the Crimson Hawks needed a spark.

IUP had controlled the opening minutes and built a double-digit lead, but mental mistakes allowed it to slip away, leaving them with just a three-point cushion at the break.

Fortunately for the Crimson Hawks, Dave Morris proved more than ready for the moment.

The Erie native scored eight of his team’s first 10 second-half points and ignited a 12-2 start out of the locker room to build the lead back to 13 points. Morris didn’t stop scoring until he fouled out with just over a minute to go, scoring 19 of his game-high 21 points in the second half. That was more than enough for the Crimson Hawks to keep the Chargers on the mat, as they never let the lead slip below double digits after Morris’ early spurt, earning their fifth Division II Final Four trip in school history and first since 2015 on Tuesday night at the Ford Center.

“Whenever my number is called, I’m ready to go,” Morris said. “Once I get hot, I’ve just got to keep letting it flow. Nothing really changed (in the second half); it’s just like coach (Joe Lombardi) preaches all the time, next play mentality. I know not to hang my head, because when my number’s called, I’ve just got to be ready for my team.”

Morris’ outburst proved exactly what IUP (33-2) needed to take over the game and let its defense dominate from there. Hillsdale (23-8) closed out the second half as the stronger of the two teams, but once Morris struck, Hillsdale coach John Tharp knew the Chargers’ best chance to topple IUP had come and gone.

“When we were down 30-27 at halftime, I was really happy with where we were,” Tharp said. “But in the second half, we came out a little flat and Morris really made some tough shots. We knew their All-American (Armoni Foster) was a great player, but we also knew how talented Morris was. He has the ability to get shots by himself and doesn’t need much to get them.”

The Chargers actually did a good job on Foster, holding him to seven points. But it didn’t matter because Morris, Tomiwa Sulaiman (18 points) and Ethan Porterfield (14) more than made up for Foster’s off-night shooting.

In contrast, Hillsdale’s only reliable source of offense was Patrick Cartier, who scored 18 points. The rest of the Chargers found nothing against the Crimson Hawks’ defense, shooting 35.8% and 4-for-29 from behind the arc. Hillsdale came in ranked 19th in the nation in field goal percentage, but never got comfortable against IUP’s scheme.

“We needed to chase them off the line and make them make tough shots,” Lombardi said. “They’ve got some terrific shooters, and when you watch the way they execute and get shots, they’re like a well-oiled offensive machine.

“I was a little concerned because they play a different style (than our usual opponents) with all of their motion. We’re pretty good at anticipating, preparing and taking people out of stuff, but I was a little concerned about our ability to guard motion, because we don’t see a lot of that in our conference. But our guys bought in well to our preparation.”

The result was that even when the Chargers did make a move, IUP wasn’t rattled. Even though this particular team hadn’t been this deep in the tournament before, the Crimson Hawks looked like old hats at competing at this level, earning a semifinal date with either Augusta or Chico State at 5:30 p.m. on Thursday.

“We’ve been here before, and going into the locker room, we told each other that we can’t worry about (the first half),” Morris said. “They’re here for a reason; they’re a great team with a great coach. We had to keep our composure and keep playing our game. We know we’ve been here before with our back against the wall, so we’ve just got to keep playing our game and everything will fall into place.”