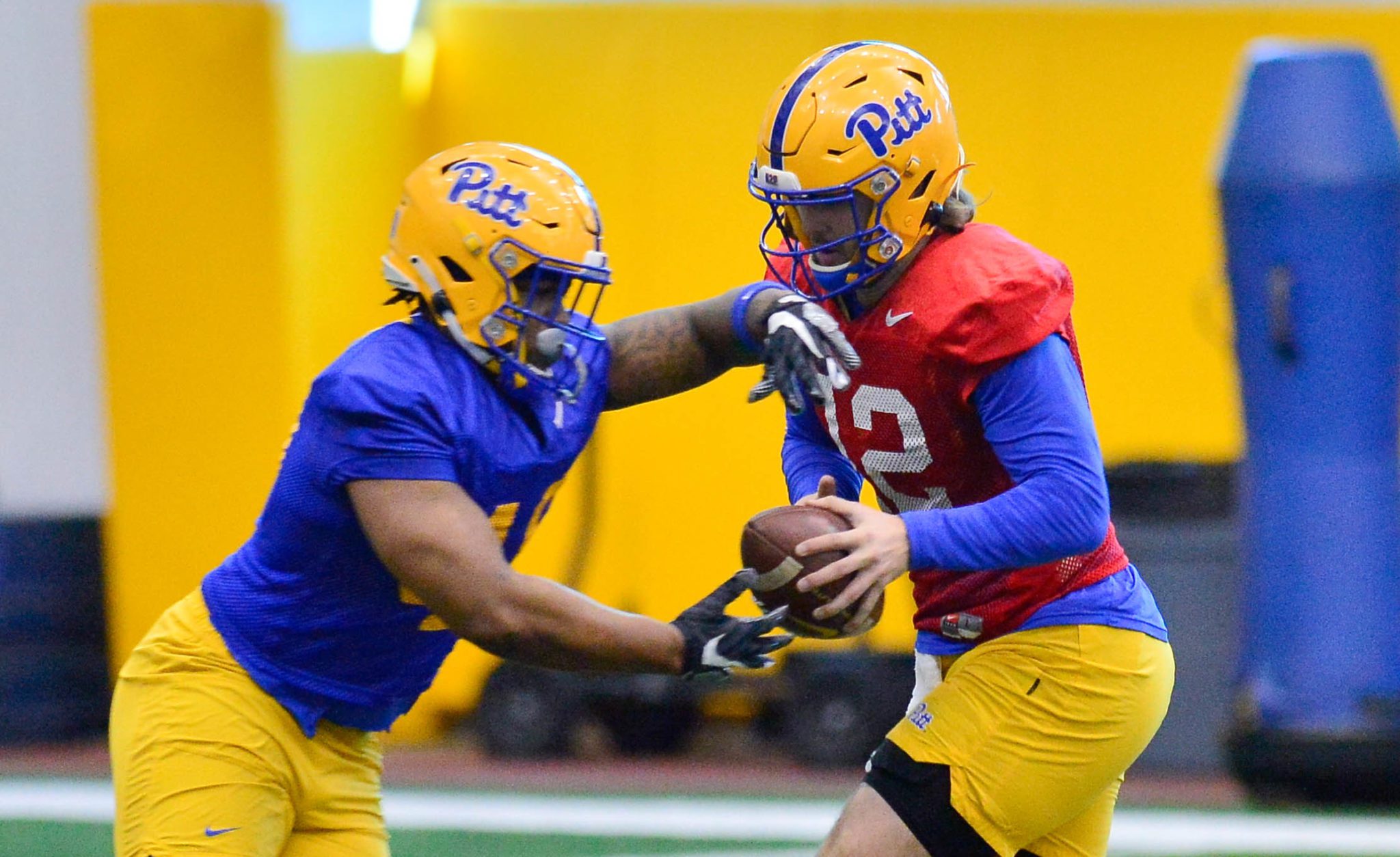 A “thud” player is someone who stays off the ground during practice, and a couple of Pitt’s players are among the worst Pat Narduzzi has seen.

A big part of coaching, Narduzzi said after Pitt’s eighth spring practice at the UPMC Rooney Sports Complex on the South Side Thursday, is actually teaching players how to practice. You don’t want injuries during practices, there are enough during the season, but you can’t always help the competitive energy fostered during good practices.

The positive yet competitive energy during Pitt’s spring practices has led to some scrapes here and there, but the overall progress that’s been made this spring is beginning to take shape in the roster coming together.

While the quarterback competition is still tightly under wraps, position depth is beginning to take shape across the roster.

P.J. O’Brien is amped up during Pitt’s spring practices, and Narduzzi was definitive when it came to who was the one who couldn’t stay off the ground during practice.

However, while O’Brien may be going at practice perhaps a notch too high, Narduzzi would much prefer the opposite in this case.

“I would rather have to turn him down than turn him up,” Narduzzi said. “So, it is a better thing. My dad used to always say, ‘Hey, when they say half speed, go full speed.’ Coach would always rather have to slow you down than speed you up.”

After enrolling early as a three-star safety out of Florida last spring, O’Brien recorded 15 tackles (six solo) and a pass defense in seven games as a reserve safety and special teamer. With a full offseason, Narduzzi is very excited about where O’Brien’s game is now.

“I anticipate (O’Brien) playing a lot of football,” Narduzzi said. “He’s a lot better right now than he was last year at this time. He’s really got a whole year in the process because he’s really into second year since he came mid-year last spring. So, this is his spring already for a guy that played a lot of ball for us last year, so we just expect him to continue to get better. He’s so much more knowledgeable right now than he was.”

With Erick Hallett and Brandon Hill already in place, O’Brien could be a key reserve behind the pair in 2022.

Dayon Hayes is Putting the Pieces Together in 2022

Dayon Hayes came on strong down the stretch of the 2021 season, racking up 6.5 tackles for loss and three sacks in Pitt’s final three games, and it’s clear he’s keeping that same intensity so far this spring.

“Dayon is like, a world ahead of where he was last season,” Narduzzi said. “Dayon is playing at a high level right now. If I had to say there was another bad ‘thud’ player, it’s Dayon. He had a bad thud yesterday and caused a little one-on-one scrap. But Dayon is playing well.”

Narduzzi said Hayes and Daniel Carter scraped for about 15 seconds before tiring themselves out. Which is a completely normal occurrence during spring practices as intensity is ratcheted up.

At 6-foot-3, 275 pounds, Hayes is bigger, stronger and smarter than he’s been while at Pitt, and he’s primed for a true breakout season in 2022 — whether in a starting role or in a rotational role along Pitt’s stacked defensive line.

Other Names Challenging for Playing Time Through the Spring

It’s incredibly tough to break into Pitt’s defensive line rotation as an underclassman, let alone a true freshman, but Sean FitzSimmons is impressing through the first half of spring practices.

“The other playing really well on the inside is Sean FitzSimmons,” Narduzzi said. “He’s really playing well, playing at a high level; he should be going to the Prom here in a month. He’s like this every day, consistency. He hasn’t hit a wall yet after eight practices, so that’s a good thing.”

FitzSimmons, a 6-foot-3, 290-pound defensive tackle out of local Central Valley High School in Monaca, has earned praise from his teammates and the coaching staff.

Another early enrollee, on the other side of the line scrimmage, that’s earning early praise is Ryan Baer.

“Ryan Baer is pushing at the backup position, left tackle spot,” Narduzzi said. “So, he’s doing really well. We’re getting a lot of guys work, we’re going 1s, 2s, 3s, so our depth is really good. Which is great, so everyone is getting tons of reps.”

Baer, a 6-foot-7, 335-pound four-star offensive tackle from Ohio, was the highest-rated recruit in Pitt’s 2022 class, and while he’s competing for a spot behind an All-ACC tackle in Carter Warren, it’s likely Baer compete for playing time this season.

Blake Zubovic and Terrence Moore have both impressed during the spring, with both guys looking to carve out reserve spots along the offensive line in 2022.

And while the competitions at linebacker and cornerback continue, the defensive line depth right now is pretty much shored up.

“I would say right now the three starters are Tyler Bentley, Devin (Danielson) and obviously Calijah (Kancey.)” Narduzzi said. “Those would be right now the top three.”

“I don’t know, haven’t thought about it,” Narduzzi said when asked when he could make a decision. “Just waiting for it — I love the competition. And we’ll see. We’ve got two good ones.”

How is Ryan Jacoby doing? As a transfer from OSU I was hoping he would move up the food chain and be an option for next year after the mass exodus of O Linemen?