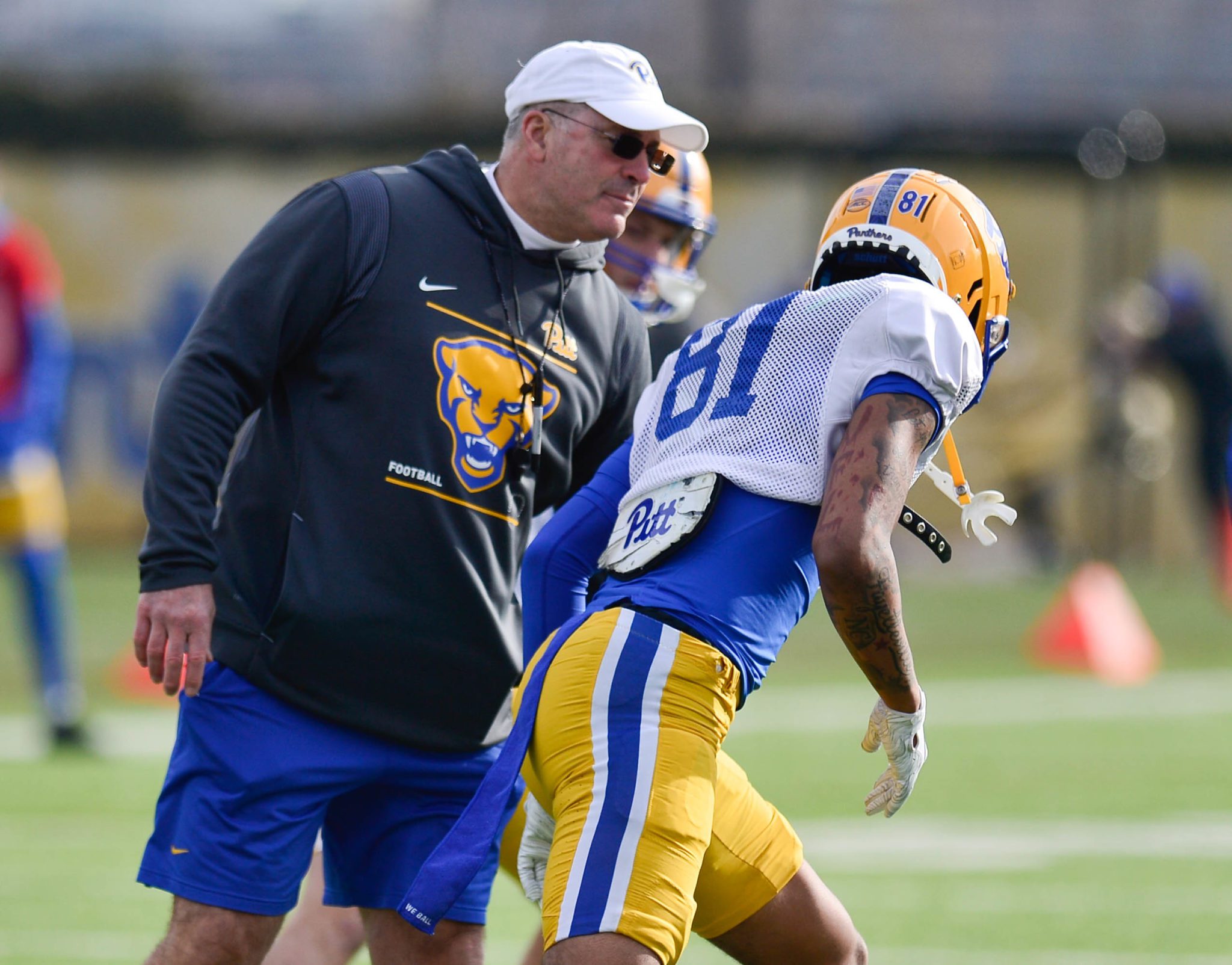 It would be unfair to expect Pitt’s offense to come out against West Virginia on Thursday, Sept. 1 at Heinz Field and score 50 points.

Without Kenny Pickett leading the first Pitt team in defense of an ACC championship, expecting another season of 40 plus points per game might be unfair, too. However, it’s certainly possible that Pitt’s 2022 offense is even more dangerous than the 2021 version. Sure, Pickett is gone. But Kedon Slovis and Nick Patti have battled for the vacancy all spring, and the position groups are even deeper than last season.

All three running backs, who combined for 2,000 yards last season, are back. The wide receiving corps has a legitimate claim for the best unit in college football and boasts the reigning Biletnikoff Award winner. Gavin Bartholomew has first-team All-ACC potential already in 2022, and he’ll be blocking alongside an all returning offensive line.

Mark Whipple left for Nebraska, sure, but Frank Cignetti Jr. has come in and installed an offense that’s twice as big, focused on establishing a rushing attack to unlock play-action chaos — along with the traditional pro-style passing attack that Pitt ran effectively last season.

If Slovis or Patti can simply get the football to their playmakers, there’s no reason why Pitt’s offense shouldn’t once again pace college football.

So, let’s take a look at Pitt’s offense entering the 2022 Blue-Gold Spring Game on Saturday.

Kedon Slovis is going to be Pitt’s starter entering Week 1 against WVU. The USC transfer has shown the poise, the arm and, most importantly, the accuracy to succeed Kenny Pickett and begin to repair his NFL Draft stock.

Nick Patti, by all accounts, has impressed both his teammates and coaches this spring as he’s battled back from offseason surgery to compete with Slovis. He’s well-liked, a team leader and genuinely a good quarterback, but he will likely back up Slovis — if he chooses to stay.

Davis Beville’s exit leaves Joey Yellen firmly in control of Pitt’s No. 3 option, as of now. Yellen, a 6-foot-3, 220-pound Arizona State transfer hasn’t made any steps during his two seasons at Pitt, but he’s a fine depth option. However, if Pitt turns to him this season, it’ll be due to dire straits in the quarterback room.

Also with Beville’s exit, Nate Yarnell is officially on the clock as Pitt’s quarterback of the future. He won’t play in the spring game, but he’s a big (6-foot-6, 210 pounder) strong-armed quarterback out of Lake Travis, Texas who has potential as a young option.

Candidate No. 1 for a breakout on offense, here’s Israel Abanikanda checking in. Cignetti’s new-look offense will feature a lot of rushes, and Abanikanda should crack the 1,000-yard mark on the ground while hauling in 30-35 catches. Izzy is one of the best running backs in the ACC.

And if Abanikanda doesn’t receive an increased opportunity in 2022, it’ll be because of Rodney Hammond Jr. and Vincent Davis. Hammond (5-foot-9, 195 pounds) is only in his second season at Pitt, he’s a capable rushing, receiving threat who will play a lot in 2022 once again.

The third piece of Pitt’s triumvirate at running back, Vincent Davis (5-foot-8, 175 pounds) is the most experienced of the bunch. While he’s been overshadowed by Abanikanda and Hammond over the past two seasons, the idea of “three starting-caliber running backs” has been a heavy presence around Pitt this spring. All three backs will have an opportunity in 2022.

Daniel Carter isn’t going to make a huge impact on the stat sheet, with just under 100 yards and two touchdowns during his three seasons at Pitt, but his presence as a blocker out of the backfield opens up the offense more so than any of his carries. And with a 5-foot-10, 240-pound frame, he’s earned strong praise from the coaching staff this spring.

One of Pitt’s Signing Day pickups in December, Jordaan Bailey is a three-star running back who hasn’t yet enrolled at Pitt. The 5-foot-11, 175-pound back will sit for at least a year before he makes an impact.

Jordan Addison doesn’t need an introduction. He’s gonna get the ball a lot in 2022, and he’s going to do a lot with it. He’s one of the best players in all of college football.

As one of the most underrated players in the ACC, Jared Wayne is big (6-foot-3, 210 pounds), sure-handed target, and he wants to play stronger and faster in 2022 as he continues to build a solid NFL Draft case. He is Pitt’s top outside receiving threat.

Konata Mumpfield plays a lot like Addison. Except he’s a bit bigger and a bit younger. Coming off a freshman All-American season at Akron, Mumpfield has been an impressive player this spring. He lined up out wide at Akron, but he could see a lot of work from inside at Pitt. Regardless, he’s going to play a lot.

Another electric slot receiver, Jaylon Barden’s third season at Pitt will feature solid playing time if he’s able to stay healthy. He’s one of the fastest players on the team, at 5-foot-11, 175 pounds, and he should shine as a reserve slot and star punt returner.

Candidate No. 1 for a breakout at wide receiver this year, here’s Jaden Bradley. The 6-foot-3, 195-pound wideout is going to play outside with Wayne on the other side and Addison and Mumpfield inside. With a bigger frame, increased speed and the desire to improve “everything” as a sophomore, Bradley could put up some big numbers in 2022.

Early enrollee Addison Copeland III has been up and down through the spring, still adjusting to the speed of the college game, but he’s a big body (6-foot-2, 175 pounds) who impressed coaches immensely before he even stepped foot on campus. His development through the summer will be interesting to follow.

An early enrollee last season, Myles Alston didn’t see the field in 2021 behind a strong wide receiving corps. It’s still a loaded wide receivers room, so while Alston may not play much in 2022, he’ll continue to grow within the room.

The fastest man on the team. Che Nwabuko, who is finishing up his senior season at Manor High School in Texas, has already set a personal best 10.23 100-meter dash time. He’s blessed with near Olympic-level speeds, and his integration into Pitt’s offense — and the track & field team — will be a true X-factor in 2022 and beyond.

The sky is the limit for Gavin Bartholomew. He’s big (6-foot-5, 250 pounds) and he’s shown the ability to stretch the field so far this spring. Able to line up along the line, inside and outside in 2022, he should use his freshman All-American campaign as a launchpad to stardom.

Pitt loves to run two tight end sets, and it’s Jake Renda that has emerged as Pitt’s No. 2 option behind Bartholomew. After entering Pitt as a 210-pounder out of IMG Academy last season, he’s already put on 40 pounds of muscle in the year since, and he’s seen his game grow through this spring. Not only is he holding his own against Pitt’s defensive line, but he’s also a legitimate threat out wide.

Cole Mitchell enrolled at Pitt in the summer of 2021 as a three-star tight end out of Fredrick, Maryland, but he didn’t see the field as a true freshman. He likely won’t make much of an impact in 2022. Although, with a 6-foot-5, 255-pound frame, he could use a strong spring game to impress the coaching staff.

It’s been a long road for Kaymar Mimes, who was a top defensive end out of Long Branch High School in New Jersey in 2017, but he’s settled into a big-bodied reserve tight end role after four seasons. That’s likely the extent of his impact.

Carter Warren turned down a Senior Bowl invite to return to Pitt for one last season, and Pitt’s starting left tackle will have one last chance to prove that he’s one of the better tackles in college football. At 6-foot-5, 320 pounds, Warren should be one of the top tackles in the ACC.

The newest member of Pitt’s all-returning offensive line, Marcus Minor adapted to Pitt’s system and played 13 games next to Warren last season. With a 6-foot-4, 325-pound frame and as one of the best run blockers on the roster, he’ll have the chance to be even more aggressive.

The vocal leader and centerpoint of Pitt’s offensive line, Owen Drexel returns as the center of Pitt’s offense in 2022. At 6-foot-3, 305 pounds, he’s well-built and seasoned for a center.

After sustaining a season-ending injury against North Carolina in 2021, Jake Kradel is working back to full health and will miss the spring game, but he will enter 2022 as Pitt’s top right guard. It’s the consistency in the run game he’ll need to continue to craft.

Pitt’s opposite tackle, Gabe Houy made 12 starts in 2021 — nine at right tackle and three at right guard. He’s fully locked in at right tackle entering 2022, and at 6-foot-6, 315 pounds, he will continue to improve his run blocking in 2022. A trend across the line, as all five guys were strong pass blockers in 2022.

Matt Goncalves made four starts for Pitt down the stretch in 2021, finishing a season in which he played in 13 games and made five starts, and his versatility and size (6-foot-6, 310 pounds) will lead to another season in which he’s the first off the bench and versatile enough to play across the line.

Another extremely versatile option along the offensive line, Blake Zubovic will once again be one of the first linemen off the sideline in 2022. After filling in at center and guard in 2021, playing in 13 games with four starts, he’ll do the same this season. And he’s the top center on Saturday with Drexel out.

The Ohio State transfer filled in admirably down the stretch, playing in three games and starting the Peach Bowl, after arriving midseason. The 6-foot-4, 315 pounder is well-equipped as a swingman in Pitt’s system and should be a factor this season and next.

Ryan Baer is big (6-foot-7, 335 pounds), like, really big. But he’s also young. Regardless, the true freshman is already the No. 1 contender to back up Warren. And Narduzzi himself has said Baer will play for Pitt in 2022.

Terrence Moore preserved a redshirt in 2021, playing just four games in a reserve role. The 6-foot-5, 305-pounder won’t be much of a factor in 2022, and he won’t play in the spring game, but he could be the long-term answer at center.

Terrence Enos didn’t play at all in 2021, spending the year as a redshirt, but he’s continued to grow during his brief time at Pitt. At 6-foot-4, 320 pounds, he’s built for a role along the line, and he should compete in the seasons ahead.

Originally a tight end, Jason Collier put on some weight during the 2020 season in a switch to lineman. He’s 6-foot-6, 335 pounds, and he’ll be used mainly as a special teamer in 2022.

Trey Anderson is older than most redshirt freshmen, having spent two years on missionary after committing to the 2019 class, but he’s still a bigger (6-foot-6, 285 pounds), relatively inexperienced option who will continue to learn this season.

It’s been a slow spring for Branson Taylor, who will not play Saturday, but he’s a big guy (6-foot-5, 330 pounds) that has played a solid amount as a mostly special teams blocker. He will continue to do the same in 2022.

The 935th-ranked recruit in the class of 2022, Isaiah Montgomery is a big (6-foot-5, 280 pounds) offensive tackle who will benefit from sitting behind a deep unit for a couple of seasons as he adjusts to college football.