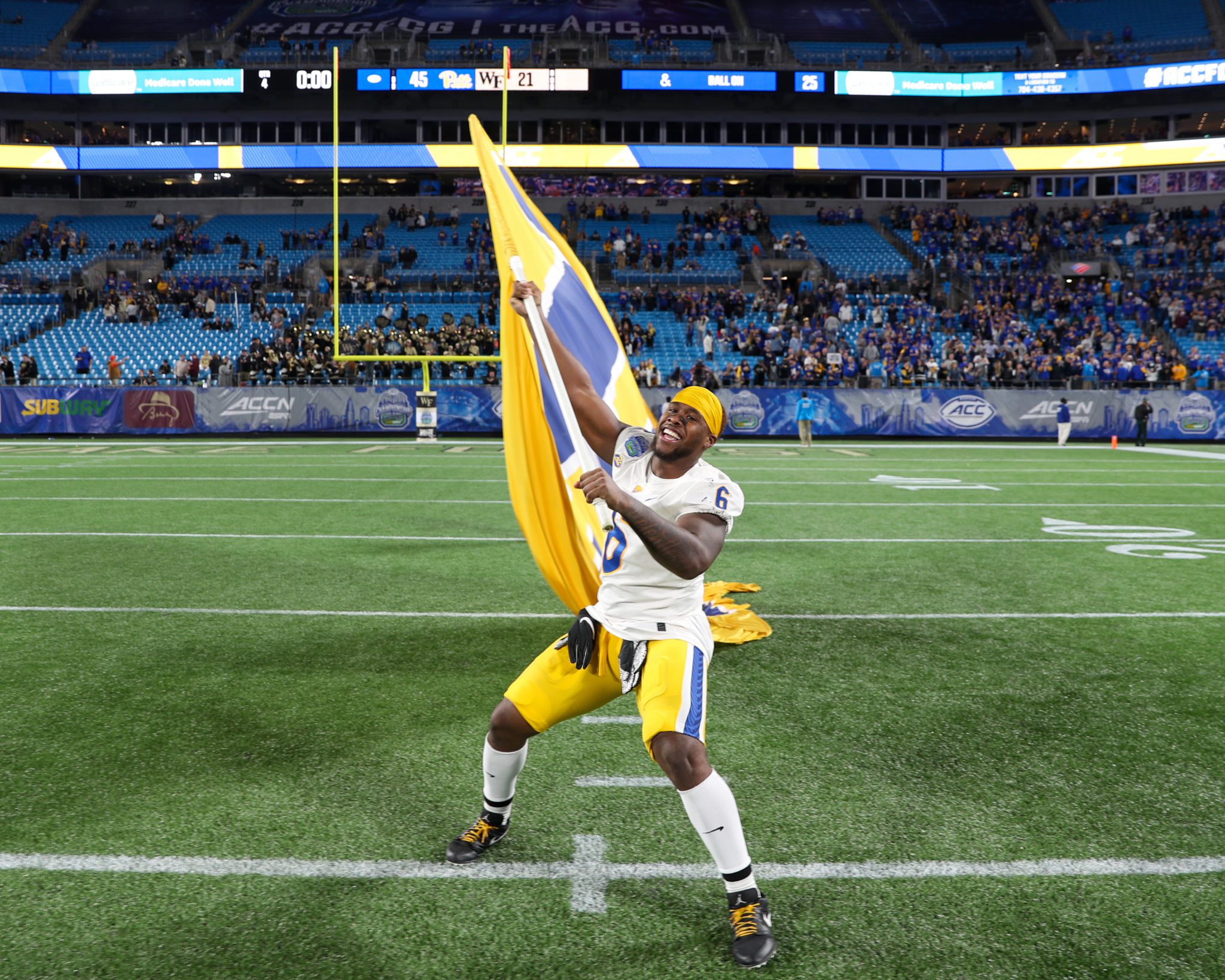 If someone wants to get back at Pitt fans in an argument, the common response — especially from Penn State fans — is to bring up Pitt’s game-day attendance.

Pitt defensive end John Morgan III, who’s emerged as one of the emotional leaders on the team ahead of the 2022 season, has come up with his own way of clapping back at stadium attendance. Morgan has partnered with Th3 NIL Shop to sell his “107 Diamonds vs. 107K” shirts.

Championships Or Attendance Records 🤷🏾‍♂️ All I’m Saying Is I Like To Look Good While I’m Wearing My Ring ! PITT Fans This One Is For You🔥 @Th3NILShop #PSPoo #NIL https://t.co/Jgo6oQAMrQ pic.twitter.com/i3bjtxBOxz

Morgan, who’s partnered with Th3 NIL Shop and Bonfire to release his Trap Walker apparel, has been very vocal on Twitter in both responding to opposing fanbases and rallying support around Pitt football in the wake of Jordan Addison’s exit for USC.

As a key component of Pitt’s defensive line, one of the big four with Habakkuk Baldonado, Deslin Alexandre and Dayon Hayes, Morgan — this spring especially — has emerged as the definition of a Pitt man. And after a very strong spring, showing out in the 2022 Blue-Gold Spring Game, Morgan’s senior season is gearing up to be his best yet.

Morgan played in all 14 games last season as a redshirt junior, starting three, and he recorded 27 tackles (19 solo), 6.5 tackles for loss, 5.5 sacks, a forced fumble and recovery and a pass defense. In a start against Michigan State in the Peach Bowl, Morgan forced a fumble that was scooped and scored by Cam Bright.

Walker’s 107 Diamonds Tee can be purchased here, along with all of Trap Walker apparel.

There is no comparison between a football weekend on a college campus and a Pitt game at a stadium you borrow from an NFL team. Big Ten (big boy football) in front of 107k fans. Keep doing you little brother, the articles are funny trying anything to come close to PSU football. Penn State plays for national championships, not winning a title in triple A football.

hahaha. hilarious! when was the last time penn state played for a national championship? did I miss that one? such a delusional fan base.

94, 86 and 82. Won the BigTen in 2016 but probably didn’t make a tee shirt about it. All 10k of the fans in the Steelers stadium this year can buy that shirt then send the proceeds to Pickett as he carried them. The slide back to mediocrity will come right back this year as Addison couldn’t wait to get out of there.

I’ve never seen a fan base brag more about how many people are in the stands than how many wins they have during the season. it’s mind boggling! I just can’t comprehend how excited people get to be in a cow pasture that literally smells like fertilizer for the first half of the year. maybe it’s all that cow methane that make you think your playing for national championships every year.

Penn State fans don’t someone made a t-shirt as big brother lives rent free. You should ask people and kids as 107k pack it every game and Penn State has the #3 recruiting class in 2023. Coming from a JV program that has to borrow a stadium to play in I get how you can’t comprehend. Penn State realizes it’s almost impossible to play for National Championships every year when you play in the Big Ten East (big boy football). You are guaranteed at least two losses a year, and the SEC get’s two teams in the playoffs constantly. They… Read more »

PSU football is a disgrace. Your head coach is a clown who has been heard saying his number one goal is to make “$1 more than Nick Saban.”

Pedophile U. Joe Knew. Cow pasture U. Alcoholic U.
Cover Up U. Embarrassment U.

“WE ARE”?… What exactly does that mean nowadays?

We are what exactly? PSU fans, everytime you chant that as if it’s something to be proud about you are making an ass out of yourselves. Everything you are proud about was built on a sham, a lie, and I could finish the “WE ARE” sentence with any number of phrases to remind you what you’re university “Really IS” but everyone already knows.

the non legacy of a coach who was a shame

Emperor Palpatine would be proud of this commet thread – let the hate flow through you!