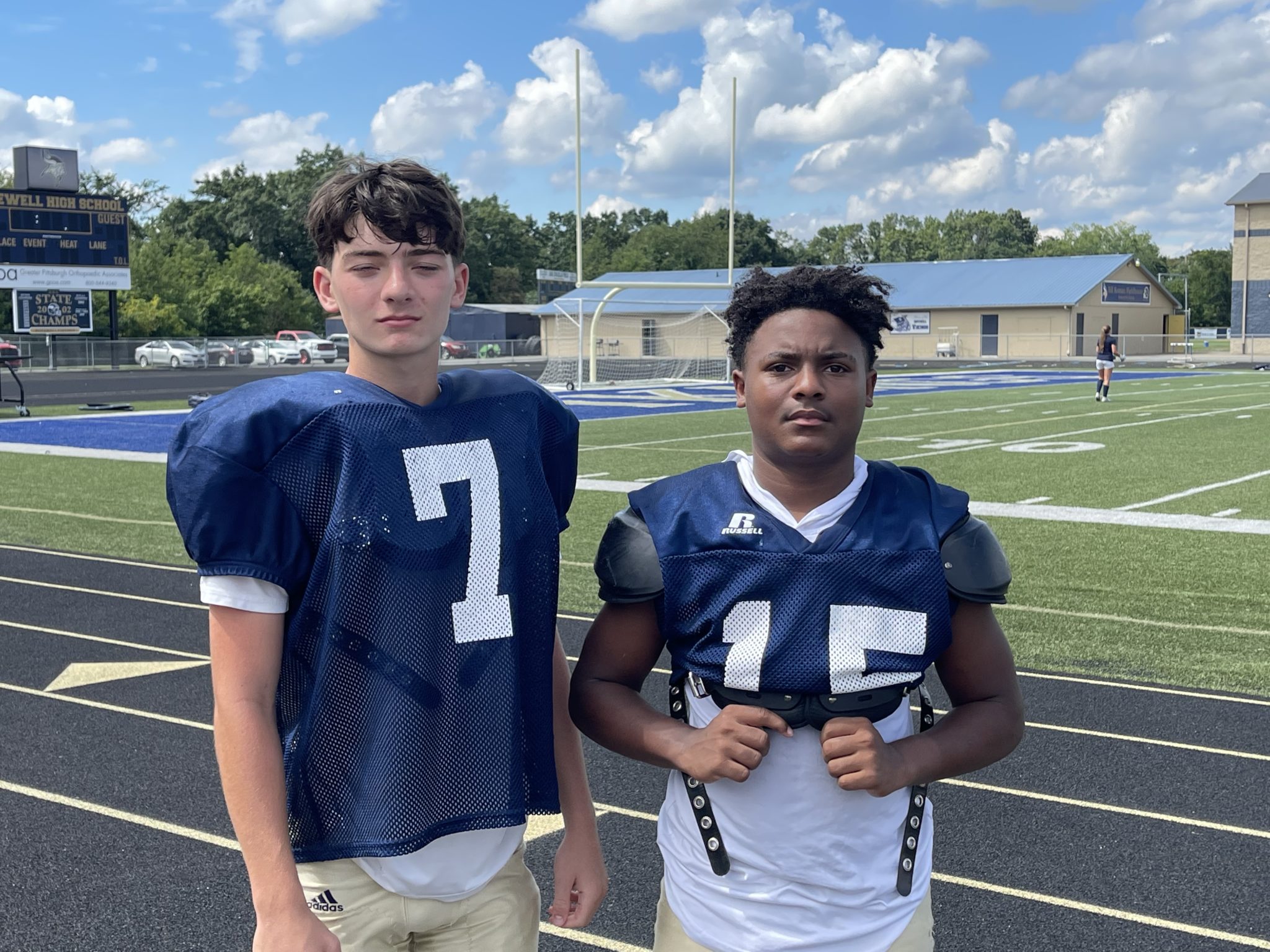 Losing isn’t an easy thing to deal with, especially when you’re used to having success and winning.

Unfortunately, that’s what Matt Weiss has had to struggle with since taking over the Hopewell Vikings football program in 2019.

Weiss, arrived at Hopewell after having been an assistant coach at Rochester for many years, where all they did was win and win championships.

Hopewell High School has a long and proud football tradition with its record books filled with names like Tony Dorsett, Dan Raines, Paul Posluszny and Rushel Shell, just to name a few.

But that’s all in the past.

The Vikings football program has hit hard times over the last decade as wins have been few and far between. Last season the program hit rock bottom as they went winless (0-9) and the morale was at an all-time low.

Many things have contributed to the loss, but lack of participation was at the top of the list. Last season, Weiss and his staff had to try and coach a team that finished with just 17 players total on the roster.

Things appear to be changing at Hopewell as the team currently has a roster of 53 kids, due in large part to the boost they’ve received from the incoming freshman class. Thanks to that dramatic roster increase and some of the talent that’s entered the program, Hopewell football could be on their way to winning times at Tony Dorsett Stadium.

“The biggest thing we’ve tried to do over the last few years is establish our culture,” said Weiss. “Year one, we had a culture playbook and we handed it out to our players and told them that this is what our culture needs to be, you need to follow this and you need to live it. The past couple of years, we’ve had a small pocket of guys doing it and we really didn’t have strong senior leadership. This season, every single kid has bought into the culture, especially the young kids, the freshman class. They have bought into what the senior have sold to them and that’s a living, breathing reason of what we currently have going on here right now.

“The past three years have been difficult. We were fighting different attitudes, ‘me’ guys, how things used to be. For us coaches, it was just a matter of sticking to what we believe in and not bending for anybody and taking our lumps. Now in year four in camp, we have 53 guys on the roster, we’re flying around and everyone is having fun. This is the most fun I’ve had since year one. The night before our first practice, I didn’t fall asleep until 3:30 in the morning because a million things were going through my mind, and I was just super excited.”

Culture is a term all high school, college and professional teams emphasize. It isn’t easy to talk about the importance of it when the results aren’t there, but Weiss continued to preach it to his players and focused on three main things.

“The things that I harp to our guys about, and we have it hanging in our weight room, is that we need to eliminate ‘BCD”, which is blaming others, complaining about circumstances and getting defensive at yourself when you do something wrong. The biggest thing we want our guys to do is eliminate that, take ownership, admit you screwed up and work twice as hard on the next play. When guys have that humility, then they’re able to get coached harder. We’re doing stuff right now that we didn’t even sniff in the last three years.”

While having a culture is key, so is having the appropriate number of players to instill that culture in. A coach can have the best game plan and the most dynamic system, but when you have a roster size that Weiss has been working with, that’s a near impossible task even for the best head coach. Fortunately for him and the Hopewell football community, kids appear to be investing in the program again.

“It was so difficult to operate practices last year with just 17 kids,” said Weiss. “But when you have the numbers that we have right now, we have guys rolling and we’re able to give guys looks. We have young guys that are building their minds and themselves up. It’s just super encouraging. We’re coaching our young guys just as hard as we’re coaching our ones. It’s so encouraging to see so many kids that want to be a part of the program and it’s really our young guys. It’s the freshman, the 8th graders, the 7th graders, the 6th graders. We have large pockets of kids that are coming up playing football. High school football is cyclical everywhere and there’s no doubt we went through our struggles, but Hopewell football is back.”

It’s not normal to see a large number of freshmen play on the varsity team, but that will likely be the case for Hopewell in 2022. Some of the young Vikings to keep an eye on are Kingston Krotec, Julian Baldwin, Nick Thomas, James Gill and Cameron Vecciarelli, just to name a few.

“I have high expectations for myself, I always have,” said Baldwin. “I’m working to try and be the best and have always had that mindset. I have high expectations for myself as I want to be first team all-conference but also as a team. I want us to win a state championship before we graduate from Hopewell. I can feel the difference in attitude on this year’s team. Last year when we were in the locker room with them it was dead and always quiet. This year everyone gets along, and we have really high expectations. We’re coming in with a hungry attitude. We’re used to winning, we were 6-1 last year (8th grade), and we’re going to bring that to the team this year.”

“What I like about Julian is you can tell that he’s the son of a football coach,” said Weiss. “His attention to detail and preparation for football is above a lot of other kids. That comes from being around coaches all the time and watching film with his father. I just really love his preparation and that sets him up for success.”

Speaking of sucess, Krotec is a kid that’s had that in everything he’s done. He’s a dual-sport standout, having enjoyed a ton of success and winning within the Hopewell and Pittsburgh Diamond Dawgs baseball programs and is hoping to do the same on the football team.

“Kingston is just a natural, savvy, multi-sport athlete,” Weiss said. “Kingston is a competitor. He’ll go out there and talk trash to the seniors. He doesn’t care because all he wants to do is win. This whole group has that attitude of wanting to win. Kingston and some of the other young players have that swagger that we’ve been looking for.”

“You can feel that everyone is bonding together,” said Krotec. “The upper classmen have been with us since June training and have really helped trying to get us used to varsity football. They’ve been a big help.

“Winning is very important and something I’m used to. Winning brings energy, it brings energy to practices and makes everyone want to get and be better.”

Krotec is currently competing at quarterback with sophomore Thomas Pipkins III and wants his class to bring winning football back to his hometown.

“I love that I have a chance to make an impact and impression in just my first year,” said Krotec. “Coming into camp, I knew that there was a sophomore ahead of me and that we were going to be rotating. I also knew that this was going to be a process and that I need to show the coaches that I’m progressing as a player. I’m excited. The biggest thing that I’m going to bring is my mobility and ability to make plays outside of the pocket if I have to and also throw the deep ball.

“It would be a blessing to bring back energy and winning to the Hopewell program. I remember coming here when I was little, the stands were packed, and everyone was here. Now things are dead but once we start winning, we’re going to bring that back.”

Krotec, Baldwin, Weiss and the rest of the 2022 Hopewell Vikings open up the regular season on Sept. 2 at home against New Brighton.