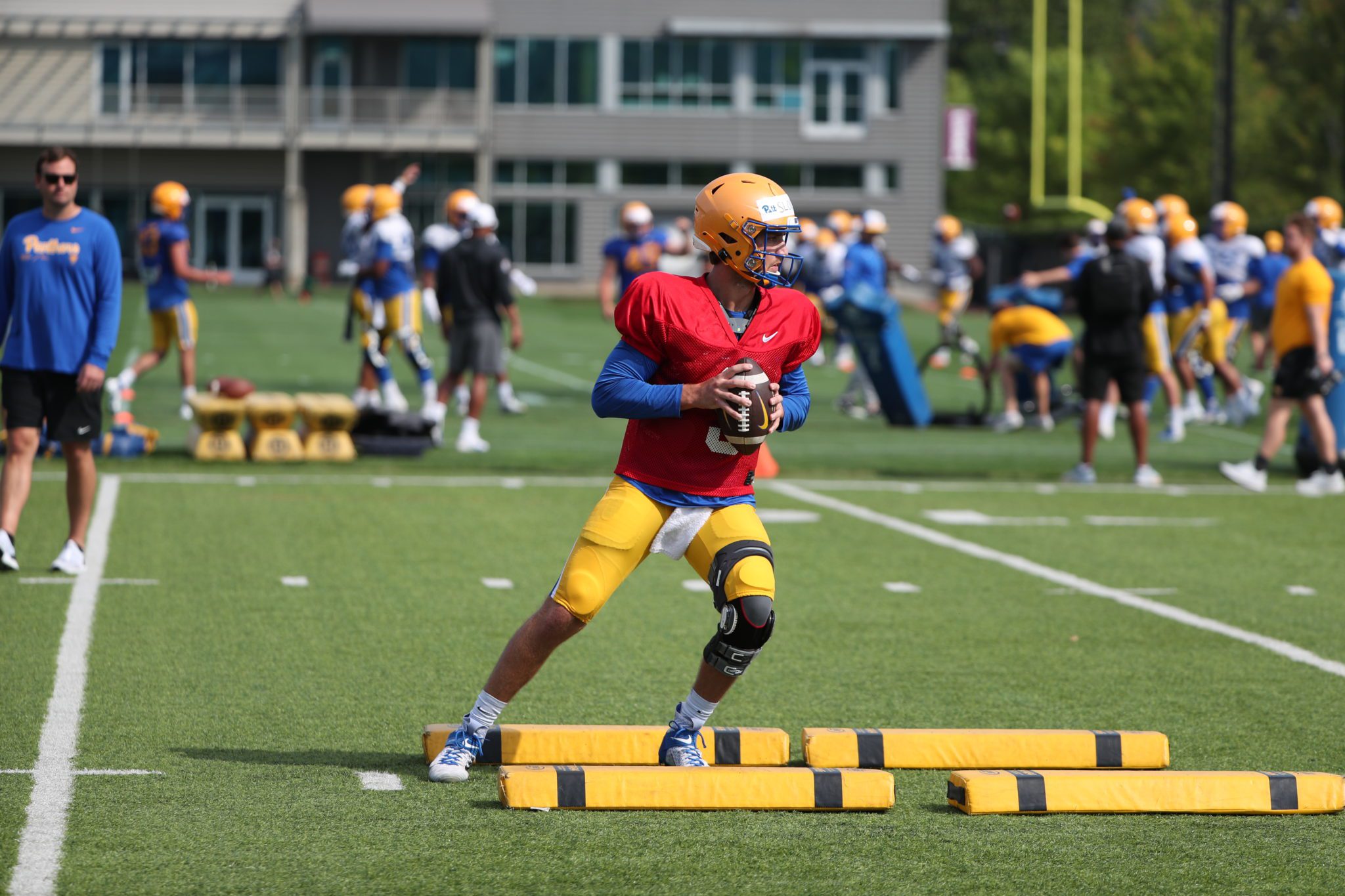 The two biggest current sports questions in Pittsburgh both deal with quarterbacks.

Who will Mike Tomlin name as the starter to replace future Hall of Famer Ben Roethlisberger? And on the other side of the South Side complex, who will Pat Narduzzi choose to replace Pitt great and Steelers 1st round pick Kenny Pickett.

While legitimate cases can be made for all four quarterbacks, Mike Tomlin no doubt has the more difficult decision. Does the future start now with Pickett or does he ease him in later on during the season?

As far as who replaces Pickett at Pitt, I think this one is a lot easier.

Emotionally, Narduzzi might struggle with Kedon Slovis vs. Nick Patti, but the only decision that makes sense is for Slovis to lead the offense when the season starts next Thursday against West Virginia.

While I view this as easy from the X and O standpoint, it’ll no doubt be difficult for Narduzzi if he has to tell Patti he’s the backup quarterback again.

Since joining the program, Patti has been nothing but classy and been the perfect teammate and perfect example of the Panthers “We Not Me” mentality.

While Pickett was putting up Heisman Trophy worth numbers and working his way into becoming a 1st round draft pick, Patti was no doubt preparing in case Pickett was injured but also looking ahead to the 2022 season as he was envisioning himself as No. 8’s replacement.

That all changed on Dec. 22, when Narduzzi officially announced that Slovis was transferring to Pitt from USC.

Patti had to make a decision on his future at Pitt.

Instead of making the easy decision and one that most kids these days would’ve made, Patti decided not to transfer and instead, bet on himself and embraced the upcoming camp with Slovis. Major props to Patti for that because that shows a toughness and a kid that doesn’t run from adversity. The NCAA transfer portal is filled with a lot of kids that want roster spots handed to them and refuse to work for something after having things easy in high school.

Unfortunately for Patti, in my opinion, the only chance that he had to start was if Slovis completely fell on his face in camp and that hasn’t happened.

For that reason, I can’t see how Narduzzi doesn’t go with Slovis.

The biggest reason for that is the upside that he brings. After winning the starting job at USC as a freshman, Slovis went on to throw for 3,502 yards, 30 touchdowns, 9 interceptions and completed 70.9% of his passes. In the COVID shortened year of 2020, he still passed for close to 2,000 yards with 17 touchdowns and 7 interceptions.

After two seasons with a stat line that read over 5,400 passing yards with 47 touchdowns and 16 interceptions, Slovis was being mentioned as both a Heisman Trophy candidate as well as a future 1st round pick.

For some perspective, compare the stat lines for Slovis and Pickett over their first two seasons as starters.

However, thanks to injuries, a bad offensive line and coaching that has made USC mediocre for a decade plus, Slovis struggled last season, was eventually benched and that’s how he arrived at Pitt.

The talent is still there and people that I’ve talked to who’ve watched Slovis this fall, say it’s obvious why people were gushing over him at USC. He’s a natural quarterback with a pretty release, has great touch and throws a terrific deep ball.

In terms of pure quarterback talent, it would be difficult to name a better one to wear a Pitt uniform over the last 20+ years. That’s not to say that Slovis is going to outperform Pickett or others, I’m just saying that the potential is certainly there which is what has to intrigue Narduzzi and Frank Cignetti, Jr.

Like Pickett had last season, Slovis would benefit from playing with a strong offensive line and a ton of weapons at the skill positions, especially wide receiver.

The other reason that I believe Narduzzi goes with Slovis is that he pursued him, despite knowing that Patti would be returning. If he was completely sold on Patti after having watched him the last few seasons, there would’ve been no reason to go after Slovis. I know someone will bring up depth, but there were plenty of other quarterbacks in the portal with a lesser profile than Slovis.

A program doesn’t go after a quarterback like Slovis without the sole intention of making him its starter.

While it would be nice to give Patti a chance after patiently waiting for his opportunity, Narduzzi’s only job is to keep the positive momentum and winning ways going following the programs first ACC Championship.

The only way to do that is to name Kedon Slovis the team’s starting quarterback.

Probably correct on this one. And, Slovis bet on himself by coming to Pitt … ie., he knew that Patti, Yellen and Beville were already there. I didn’t get to see him play at USC but, i’ve got to believe that our O-line this year, is as good or better than what he had both years at USC. Also, the receiving corp is pretty darn good as well. He could light this thing up. With respect to Patti .. agree as well. He has been the consummate teammate and will be extremely valuable at #2 if that is where things… Read more »

Only thing I worry about with Slovis is turnovers. If he isn’t protecting the ball it doesn’t matter how much talent he has. Both kids seem very supportive and humble.

Both are going to play this season. My fear is that WV will target the starting QB from the kickoff until he’s out. Cheap shot if necessary.
Their season is a success if they ruin ours. Stupid decision to schedule them.

That’s a horrible way to look at things.

What evidence do you have that west Virginia will try to injury pitt players?

Do you think pitt players try and injury Penn st players when they played?

I can’t even understand how someone can think like you.

QBs at PITT via Transfer still Swing and Miss; + Outcome Tom Savage and Nathan Peterman, – Outcome Max Browne, Ricky Town, Bo Schneider, Joey Yellen, Self Recruit: Chad Voytik, Ben DiNucci, Kenny Pickett. It is a Hit or Miss at a very demanding position.
I can see where Patti has a WTF moment if he does not get the nod.
Wait a week or two before nabbing Yellen and maybe its Phil Jurkovec in the equation instead.
Just as long as QB2 does not Portal in the next 10 Days they still have a legitimate chance of playing.

Who has looked the best in practice? Even scrimmage I’ve seen it is Patti. I don’t care what Slovis did at USC in the past. This PITT and Whipple did a heck of a job developing at least two QB’s at PITT. Slovis has two years to play. This is Patti.’s last to show he is got it.