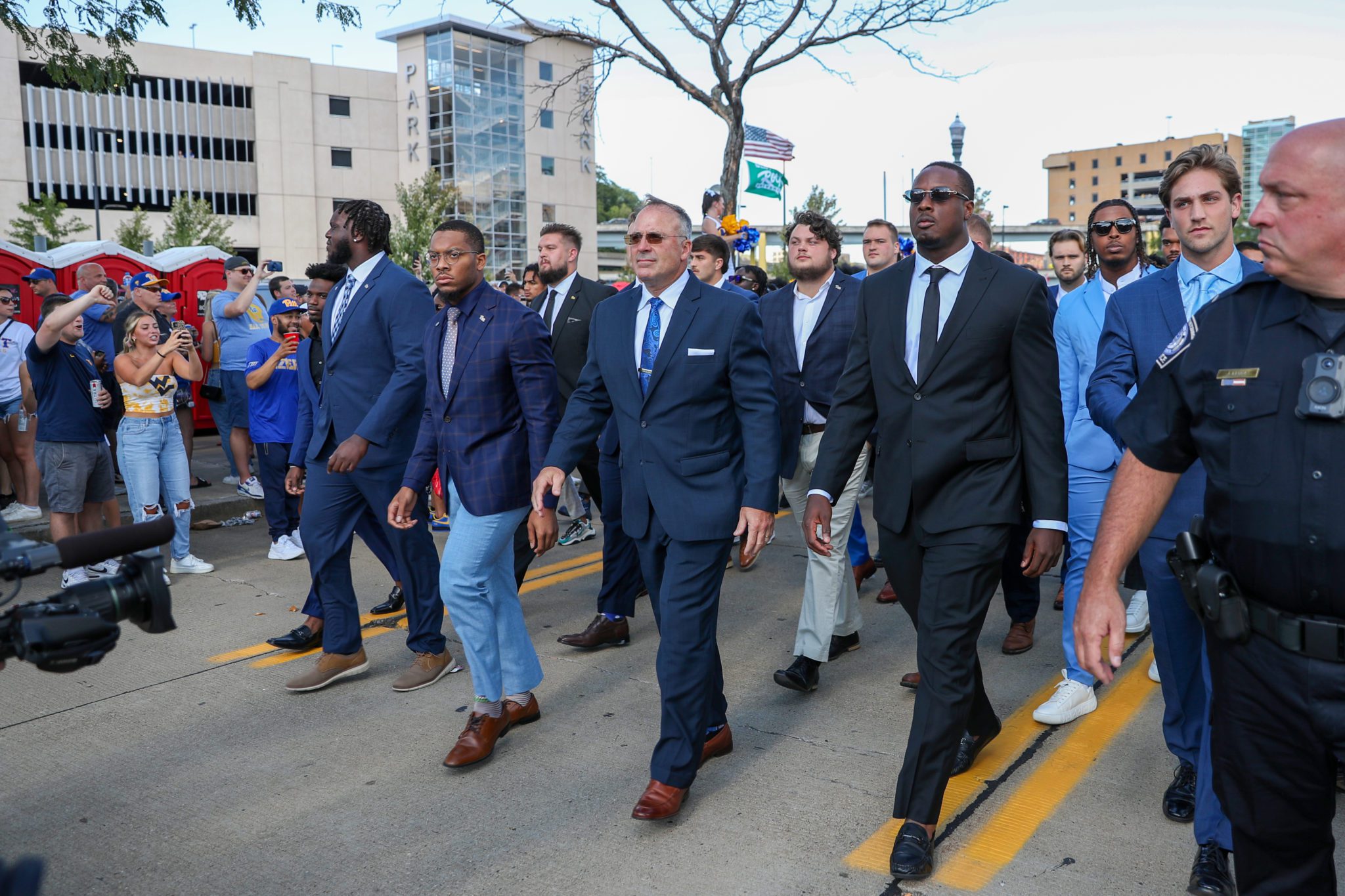 The 2022 season isn’t just the continuation of Pitt’s quest to remain at the peak of ACC football, it’s the chance to prove that last season wasn’t a fluke. And it begins in perhaps the best way possible.

West Virginia travels to Acrisure Stadium to open the 2022 season, the renewal of the Backyard Brawl that’s more than a decade in the making, and a win in one of the very biggest rivalries in college football would kick off the season better than any FCS or Group of Five — or even Power Five — matchup ever could.

There’s legitimate hatred on both sides of the rivalry, a mutual dislike that predates even the 20th century, and Pitt just wants to approach the renewed rivalry with the same level of intensity of any other opening game — even with the added stakes.

Pitt operated this week with Monday serving as a crucial Wednesday. And Tuesday’s ‘Perfect Thursday’ practice in the rain and wind at the UPMC Rooney Sports Complex was not only a way to prepare for any circumstance but a way to really hone in on just what the rivalry means. However, despite the importance of the rivalry, it’s also just the first game of Pitt’s season.

It doesn’t matter who Pitt is playing, all that matters is a win to start the season off on the right foot. It would be a big game no matter who opened the season, but the WVU aspect just means more.

“We know (WVU will) come up, there’s a lot of hatred on their end — but there’s got to be a lot of hate on our end,” Pat Narduzzi said Monday at the UPMC Rooney Sports Complex. “That’s what it comes down to in rivalry games. We’ll get our guys coached up.”

The preparation on the field is one thing, and it’s certainly been a diligent game week in preparing for a rivalry such as the Backyard Brawl as the very first game of the season, but Narduzzi hasn’t made it a week of prep that’s solely focused on the rivalry. It’s a rivalry, yes, but it’s a football game. The history means a lot, but that history means less and less as the actual play on the field unfolds each season.

Narduzzi and the coaching staff have made sure to educate the roster on just what the Backyard Brawl means on both sides of the rivalry, but words can only describe so much. There comes a point where what Narduzzi or Frank Cignetti Jr. or Randy Bates says only means so much. There comes a point where the only meaningful experience comes from being on the field during the rivalry.

“You learn really quick what a rivalry is,” Narduzzi said. “Some of our guys don’t know. I didn’t know before I got to Michigan State in 2007 what a big-time rivalry was. A rivalry at Rhode Island was Brown. That was your big rivalry? Really?

“I think you have to understand where it’s coming from. They hear from other people. I can tell you this, just to finish the education. When you have to educate, you try to bring in guest speakers. Bring in the best guest speaker you can.”

Narduzzi has brought in former Pitt head coach Dave Wannstedt, former Pitt and NFL running back LeSean McCoy and more to educate the roster on just what the rivalry means to those involved. Wannstedt will serve as Pitt’s honorary captain for the Backyard Brawl, and if there’s anyone who understands the Pitt-WVU rivalry, it’s Wannstedt. It would be tough to find a more relevant pairing than Wannstedt and McCoy when it comes to the Brawl.

McCoy spoke at Pitt’s football luncheon last week, and Wannstedt will serve as Pitt’s honorary captain, but even with the education from former Pitt stars associated with the rivalry, there needs to be a point where Pitt’s players recognize the importance of the game and make sure to take the steps required to prepare for the game itself.

Narduzzi said he wants his team to have that added level of juice but the composure is important too. Even if it’s a brawl, a legitimate fight, that level of composure cannot be lost if winning can be achieved.

There’s a fine line between playing emotional and playing with emotion. Bates said that he coaches with emotion, the entire staff does, and the team plays with emotion. Keeping that composure and emotion reigned in is what can sometimes be the deciding factor in an already emotional game. With a veteran team, a team that has grown from last season, Bates is confident in his players.

And while playing with emotion and composure is important, the actual on-field product has to be good. And after months and months of playing against each other in practice, Narduzzi isn’t 100% sure of his team just yet, but he feels like it’s a good one. Thursday’s game will test that.

“It’s hard every day when you’re going against each other to find out what you have,” Narduzzi said. “For example, yesterday good on good, the offense wins 9-4. We had 13 snaps. They win 9-4. Who won that rep? Offense completes a ball for five yards or more, I’m giving it to the offense. Today the defense wins 8-4. Which team shows up, coverage shows up, who is motivated? As a coach you wish it was 6-6, okay, we’re competing. You got to compete every day. We have to find out where they are.”

It’s been just about nine months, ever since the Peach Bowl came to an end really, that Pitt has prepared. The studying has been constant, the practicing has been hard and the expectation is high. Nearly nine months of studying will come to a head on Thursday night. The test has arrived.

“You don’t know until you take the test,” Narduzzi said. “You can study, study, study, you’ve been on your iPad, your computer, but you have to show up for the test and do something.”

If there’s one area where Narduzzi feels like his team needed to ace Thursday night, it’s tackling. With the quarterbacks in no-contact jerseys all offseason, the defense hasn’t gotten a chance to really get after opposing quarterbacks. That’s going to change and change quickly.

“I feel comfortable with those guys,” Narduzzi said. “You got to go out and do it. Offensively we’ve stayed away from the quarterback camp. Your biggest concern is for your D-line, linebackers for that matter. We’ve avoided and not tackled a quarterback all camp. Now we got to go tackle one live.”

With the desire to lead college football in sacks and tackles for loss, there will never be any hesitancy in hitting an opposing quarterback. And WVU will feel the exact same way, I’m sure. It’s a rivalry again.

“Obviously one of the greatest rivalries in football, the Backyard Brawl, it’s great to be a part of it again,” Cignetti said.

How to Watch: Pitt and West Virginia Renew the Backyard Brawl