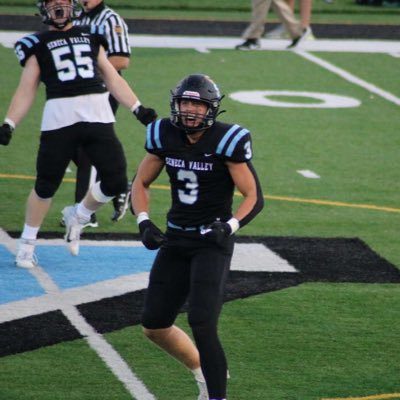 PINE TOWNSHIP, Pa. — Pine-Richland managed to score just a field goal in its 13-3 loss to Seneca Valley on Friday night. Despite starting multiple possessions in Seneca Valley territory, the Rams did not make one trip to the red zone. Division 1 commits — linebacker Chris D’Appolonia and defensive end Aiden Lyczek played big roles in the dominating defensive performance by Seneca Valley. Lycek will play at Navy next fall, while D’Appolonia is a Toledo commit.

“When your pitching three-and-outs all the time, you don’t have to get fancy,” D’Appolonia said about the defensive game plan. “We just did our jobs, and it all turned out all right.”

Seneca Valley’s defensive line was stout against the run and got after Pine Richland’s quarterbacks throughout the night. Kanan Huffman suffered an injury late in the second quarter and did not return. He was replaced by sophomore Vaughn Spencer.

“Our defensive line did an amazing job containing (Huffman) and I knew that when he started to scramble we would be able to get an opportunity to bring him down to the ground,” D’Appolonia said. “Again, we did our jobs, and everything led to a win.”

Lyczek knows the significance of beating a program like Pine-Richland.

D’Appolonia committed to Toledo because it felt like home.

“I love the culture around the program,” D’Appolonia. “From the minute I showed up there, they were super welcoming to me. Continuing to stay in touch, doing a really good job of making me feel welcomed there.”

D’Appolonia said he’ll attend the Toledo-Ohio State game at the Horseshoe on Saturday. He’s also looking forward to playing in the MAC.

“Super competitive football,” D’Appolonia said. “It really has everything that I want. I mean, nothing is a downfall at Toledo, and I’m super excited about that.

Other than Toledo, D’Appolonia had offers from a bunch of Patriot League schools, a couple of Division II schools, Marist, and several other group of five schools.

“I mean, once Toledo offered, I knew it was going to be home,” D’Appolonia said. “That’s what I was waiting for, and I knew that’s where I wanted to go.”

Seneca Valley has two Navy commits, as wide receiver Luke Lawson will also play in Annapolis next fall. Lawson committed to Navy first, and Lyczek then followed his close friend.

“The coaches are very nice. I talk to them all the time and they make me feel welcomed,” Lyczek said on why he committed to Navy. “It’s close to home, and I got Luke coming with me. He’s a great buddy of mine, we’ve been friends since seven. It’s just awesome.”

Łyczek plans on majoring in business and marketing at Navy. After four years of college, Lyczek will have to serve for five years.

“I think I’m going to serve 20 years in total,” Lyczek said. “After that, I’m trying to join the SEALs.”

Joining the military was always a goal for Lyczek.

In addition to Navy, Lyczek had offers from Walsh University, Georgetown, Army and Indiana State.