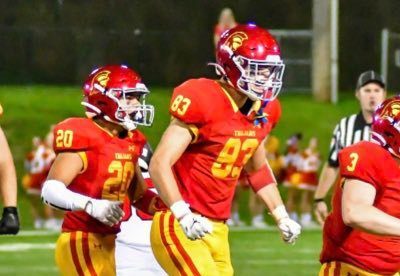 Christmas is still three months away, but Brady O’Hara received an early present and one that he won’t forget for quite a while.

Over the weekend, the sophomore defensive end/tight end from North Catholic High School received his first Division-I scholarship offer and it came from the hometown Pitt Panthers.

Being only a sophomore, O’Hara has plenty of time to make a decision but this opportunity from Pitt could be a family reunion of sorts for Brady because his older brother and sister, Aiden and Belle, both attend the University of Pittsburgh.

Pittsburgh Sports Now spoke with O’Hara over the weekend after he received the news from Pitt offensive line coach Dave Borbely.

“This was a pretty big deal. Before our game on Friday, my coach told me that I had to call this number at 1 PM on Saturday,” said O’Hara. “Saturday came around and I was kind of nervous to call. I called and Coach Borbely picked up and the phone call was super easy because he’s such a super nice guy and so easy to talk to. He told me the news and I was really in shock for like the next 30 minutes, I just couldn’t believe it. My whole team was congratulating me. I just couldn’t believe it. That was insane.

“When he offered, he said ‘Brady, we’ve watched your film and really like the way that you play with so much energy and effort and he then offered me. After I told me, I couldn’t stop smiling. It was such a great experience. Getting my first offer at this time, just completely surprised me. I had no idea one was coming.”

When critiquing his individual game, O’Hara sites his work ethic, his effort and humility on the field as some of his strengths. Although he plays tight end, wide receiver and defensive end at North Catholic, O’Hara says that he would prefer to play defensive end in college but if schools want him to play offense, he’s ok with that as well.

As we wrapped up our conversation, I got O’Hara’s thoughts on the hometown school being the first program to offer him and the significance of that.

“I was pretty hyped that Pitt was the first offer,” said O’Hara. “It’s my hometown school and both my siblings go there. It’s insane that we all could be there at the same time. I follow Pitt a lot and check out what they tweet out and watch all of their games. The hometown school being first is big.”