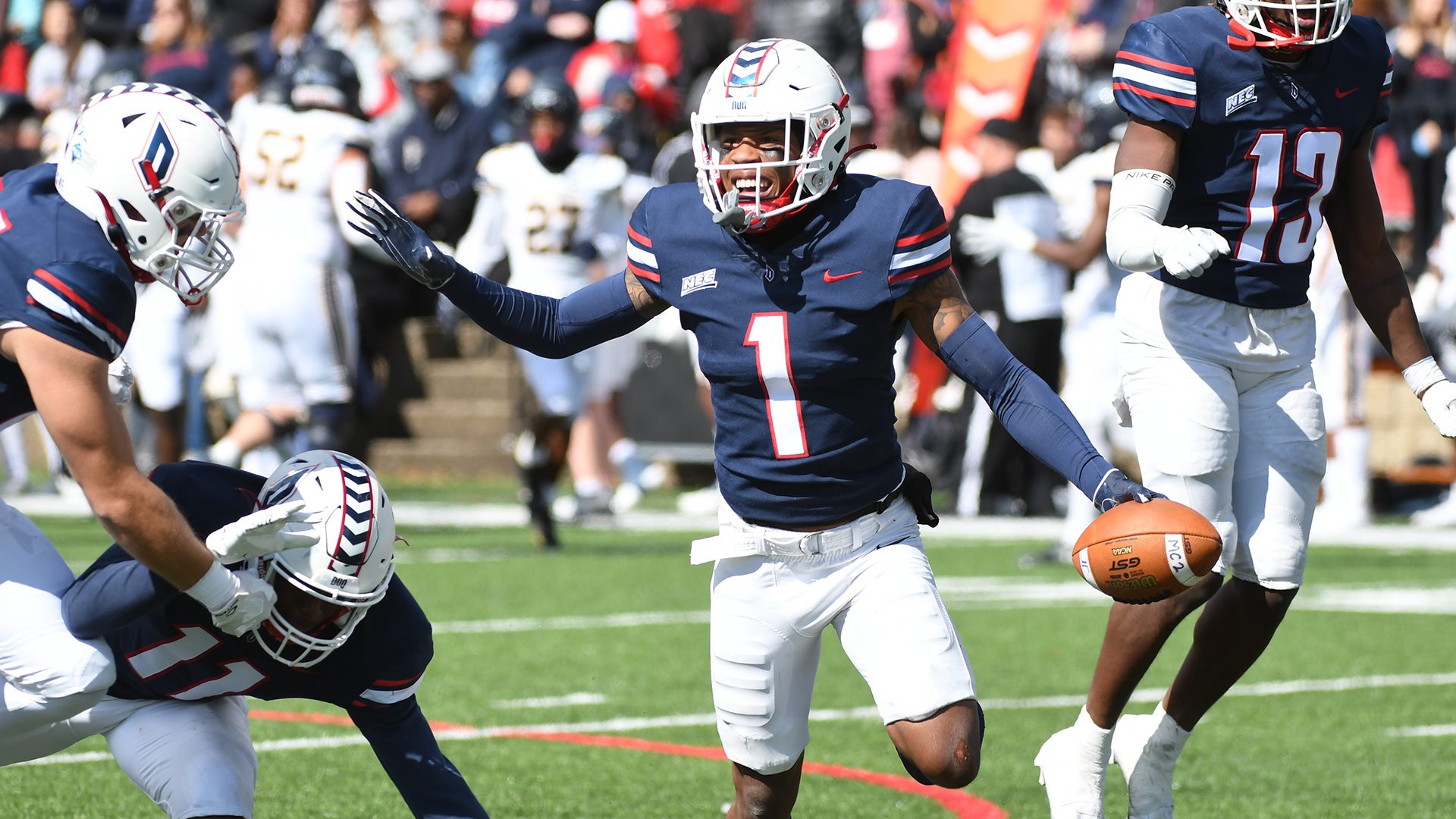 PITTSBURGH — The Dukes continue to struggle this season, as they fell to Merrimack, 28-21, on Saturday afternoon at Arthur J. Rooney Field. Duquesne is now 1-5 on the season, which is the Dukes’ worst start to a season since 1991, when they went 0-5.

“We always got to stay ready,” Perrantes said about replacing Mischler in the third quarter. “I just try to stay ready for my team, myself and my coaches. I just try to perform to the best of my ability when I can. The team did a great job, they helped me out a lot. I couldn’t be more happy with their effort. It’s a loss. Obviously, that sucks, but we just got to take it a day at a time.”

Billy Lucas capped a long opening possession with a 1-yard touchdown run to put the Dukes up 7-0 with 8:51 left in the first quarter. Lucas rushed for 21 yards on six carries on the drive, while Dwayne Menders Jr. picked up 16 yards on a jet sweep.

Merrimack answered with a methodical drive of its own, which was finished off by a Donovan Wadley 3-yard touchdown run to tie the game a 7-7 with 14:13 remaining in the second quarter. Both teams had just one possession in the first quarter.

After a quick defensive stop by Merrimack, Gavin McCusker completed a 42-yard pass to Hayden Fisher to set the Warriors up at Duquesne’s 44-yard line. A few plays later, McCusker rolled out to the right and got picked off by Dukes’ cornerback Jeremiah Josephs. The Dukes took over at their own 32-yard line.

Duquesne capitalized off the turnover, as Mischler connected to Menders down the right sideline for a 56-yard touchdown to give the Dukes a 14-7 lead with 8:23 left in the first half. Menders just beat cornerback Maverick Gamble on a fly route.

Merrimack responded by marching down the field and evening the score at 14-14 with a 9-yard touchdown run by Victor Dawson. McCusker pitched the ball out to Dawson and he got a nice block on the outside to get into the end zone.

Both team’s offenses struggled early in the third quarter, but Merrimack finally broke through and got into Duquesne territory, thanks to a 28-yard run by Dawson. A few plays later, Fisher caught a short pass from McCusker and broke a couple of tackles for a 20-yard catch-and-run touchdown to give Merrimack its first lead of the game at 21-14 with 4:45 left in the third quarter.

Merrimack got its first turnover of the game on the ensuing possession, as defensive tackle James Nyamwaya stripped/sacked Mischler, and Chiebuka Aduaka came up with the loose ball at the Dukes’ 18-yard line. On the next play, Dawson rushed for an 18-yard touchdown to enhance Merrimack’s lead to 28-14. Dawson reversed the field after penetration was created and went into the end zone untouched for the score.

Mischler was replaced by Darius Perrantes after the sack/fumble. Perrantes answered with a 48-yard touchdown pass to Abdul Janneh, who made a spectacular one-handed grab with his left hand for the score to cut Merrimack’s lead to 28-21 with 51 seconds remaining in the third quarter.

“They’ve been pressing all game, we wanted to take a shot,” Janneh said about his touchdown grab. “Darius gave me a chance to go get the ball. They were aggressive this whole game. We just got to try to get off them and try to take our shots.”

Merrimack running back Tyvon Edmonds Jr. broke free up the middle for 48 yards and almost put the Warriors up by two scores, but he got stripped by Dukes’ cornerback Joshua Wilson at the 3-yard line, and the loose ball was recovered by Ayden Gaines.

Following the turnover, Perrantes completed to Menders over the middle for a 25-yard gain, but the drive stalled and Duquesne punted. Michael Berarducci had a 52-yard punt and pinned Merrimack at the 1-yard line.

Backed up deep in their own territory, Merrimack pounded the ball on the ground and drained the clock from 9:08 to 2:35. Duquesne took over from their own 15-yard line following the punt.

Perrantes was unable to rally the Dukes to tie the game, as his pass intended for Janneh on fourth-and-10 fell incomplete. It was a play that Janneh would like to have back, as the ball just went through his hands. McCusker took two kneel downs to seal the win for Merrimack.

Perrantes is taking a day-by-day approach to help turn the Dukes’ season around.

“Day at a time,” Perrantes said. “Just get back from these injuries. Just keep learning from our coaches. Keep watching film. Every team is good in this conference. We just got to play our best football everyday.”

Duquesne has a bye next Saturday. The Dukes next game is on Saturday, Oct. 22 against Central Connecticut State at Arute Field in New Britain, Conn. Kickoff is at 12 p.m., and the game can be streamed on Front Row Sports.

Related Topics:Duquesne Football
Up Next