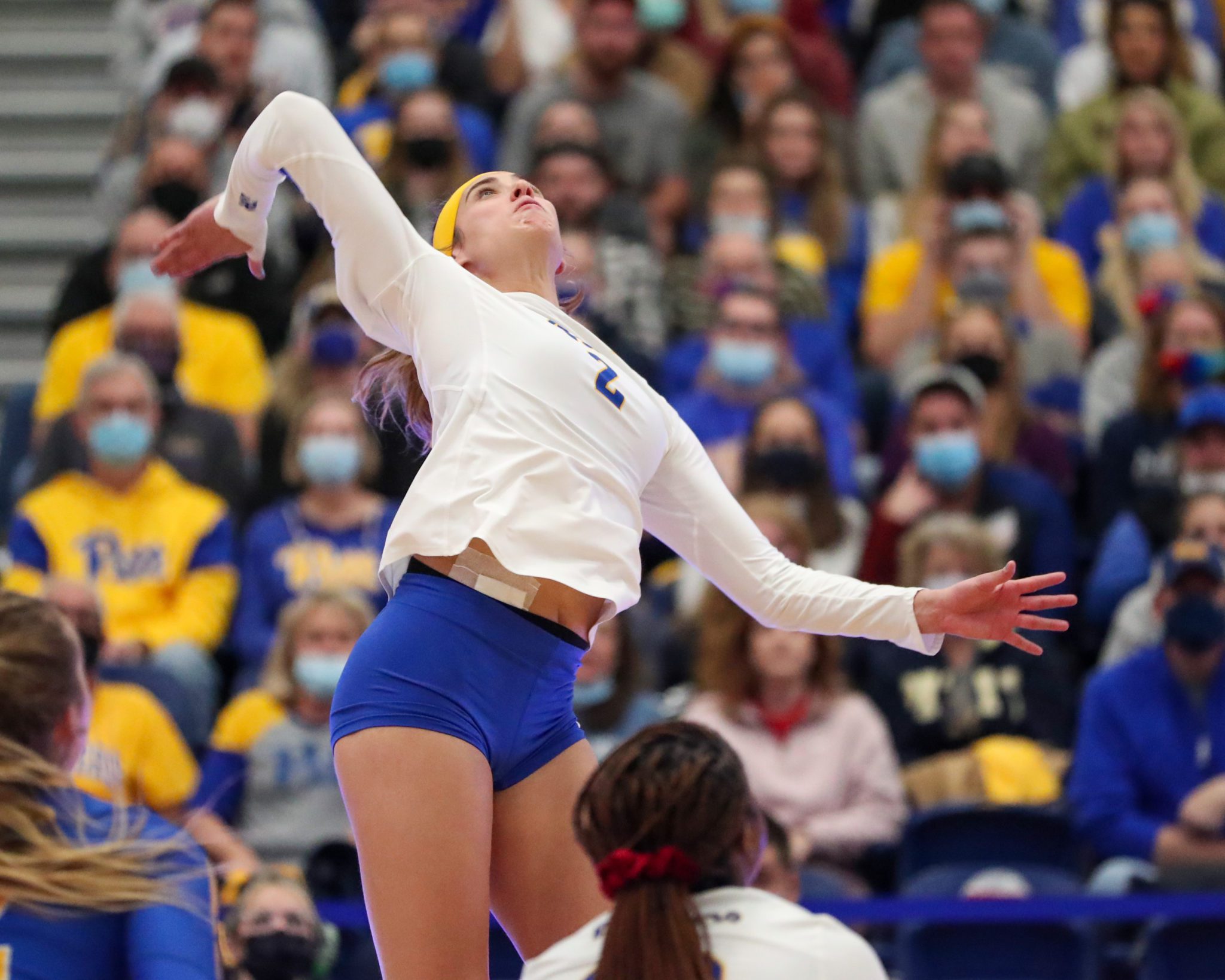 No. 9 Pitt defeated No. 10 Georgia Tech on the road in four sets on Sunday to stay atop the ACC Standings.

The Panthers (16-2 overall, 6-0 ACC) win their second straight game against the Yellow Jackets (11-4 overall, 4-2 ACC) and are 12-1 against them since joining the ACC in 2013. The win for the Panthers is their eighth straight overall and their third straight over a top 10 ranked team this season. They defeated then ranked No. 7 BYU on the road and swept then ranked No. 5 Ohio State at home, both in September.

Pitt and Georgia Tech battled it out in the first set, with the home team up 17-16 later on. Pitt used a 4-0 scoring run to take a 20-17 lead, thanks to a kill from graduate middle blocker Serena Gray, two kills from redshirt junior outside hitter Valeria Vasquez Gomez and a service ace from sophomore setter Rachel Fairbanks.

The Panthers finished the set off, 25-20, as graduate right setter Courtney Buzzerio and sophomore outside hitter Julianna Dalton made two kills each and got a point off an attack error from the Yellow Jackets.

The struggle for dominance continued throughout the second set. Neither team took control and both teams fought back-and-forth to get points.

With the match tied at 25, Pitt needed someone to step up to break the set in their favor. After making an attack error on the last set point, Buzzerio then made a kill to put Pitt up one. Vasquez Gomez then won the set on a kill of her own and Pitt found themselves up 2-0 in the match.

The Panthers tried to close the gap midway through the third set, but the Yellow Jackets used a 7-2 scoring run to create a 19-12 advantage.

Despite falling behind, the Panthers made some good plays and cut down on their earlier mistakes to get within one point at 23-22.

Georgia Tech prevented Pitt’s comeback and a potential sweep. Senior outside hitter Julia Bergmann made one of her team-leading 25 kills to put Georgia Tech up two and then an attack error from Fairbanks gave them the set.

Displeased with their performance, the Panthers began the fourth set with some brilliant play and used their momentum to take a 10-1 advantage.

The Yellow Jackets fought back to try and salvage the match, cutting the lead to three points at 18-15.

Pitt then soon got their rhythm back offensively and used a 7-1 run to dispatch Georgia Tech, 25-16, and take the match as well. Valeria Vasquez Gomez made three kills and both Buzzerio and Gray combined for three block assists to lead Pitt to the victory in that final scoring run.

Buzzerio continues to play some of the best volleyball of her career this season. Against the Yellow Jackets she led the Panthers with 18 kills. She also played extremely efficiently with a .300 hitting percentage and a .450 kill percentage. Buzzerio also added four digs and five total blocks, second best for the Panthers.

Vasquez Gomez also starred for Pitt against Georgia Tech. She finished second behind Buzzerio with 15 kills of her own and had both a .444 hit percentage and a .556 kill percentage. Vasquez Gomes also provided 10 digs as well, tied for second for Pitt, showing her great defensive abilities as well.

Middle blockers in Gray and senior Chiamaka Nwokolo made great plays and bolstered the Panthers’ attack.

Gray finished with eight kills and a team-high eight total blocks. She also reached the 1,000 career kills in the first set, with 367 of those coming at Pitt after transferring from Penn State in 2021.

Let's get some more of that in the fourth set!#H2P pic.twitter.com/a0hqqAGukw

Nwokolo made seven kills of her own and finished with a .417 hitting percentage and a .583 kill percentage.

Fairbanks created 38 assists, the second most in a game in her career. Senior libero/defensive specialist Ashley Browske continues to lead in the digs category, with 17 against the Yellow Jackets.

Pitt returns back home next weekend and takes on Miami on Friday, Oct. 14 at 7 p.m. at Fitzgerald Field House.

No. 9 Pitt takes down ACC Opponent Clemson in a Sweep