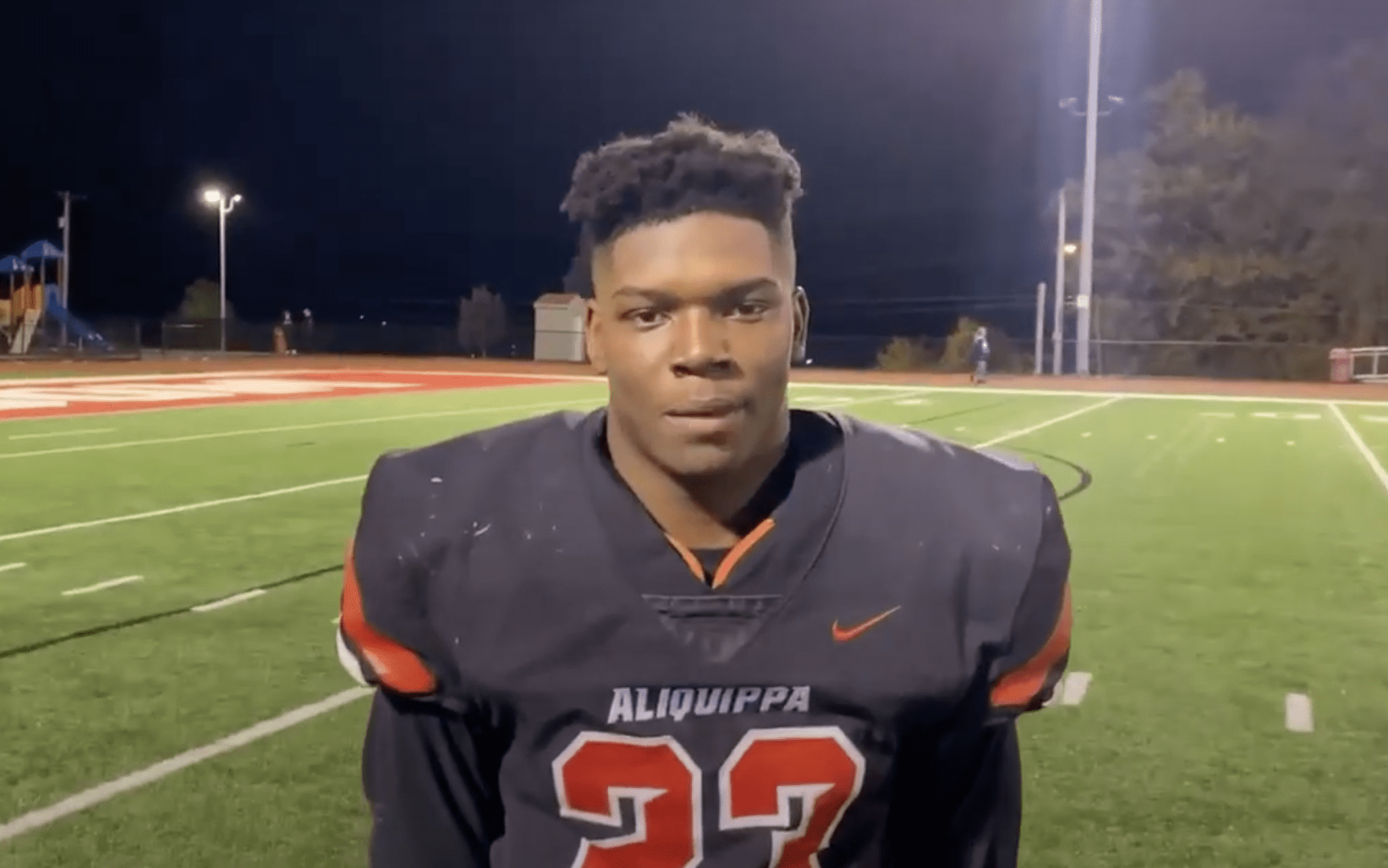 FREEDOM Pa — Division I recruits Tiqwai Hayes and Cameron Lindsey powered Aliquippa to a 35-24 comeback win over Beaver County rivals Central Valley on Friday night at Freedom Bulldog Stadium. Aliquippa trailed 24-14 at halftime, but the Quips made the proper adjustments and completely dominated in the second half. Aliquippa scored 21 unanswered points in the third quarter.

Hayes got things started with a 71-yard run on the first play from scrimmage in the second half, which set up a 3-yard touchdown run by John Tracy. Isaiah Martinez took it into the end zone on the two-point conversion to make it a 24-22 game. A 25-yard touchdown pass from Quentin Goode to Donovan Walker coupled with a 20-yard touchdown run by Hayes gave the Quips a 35-24 lead by the end of the third quarter.

“I just seen J.T. (John Tracy) block for me really good, and (Naquan) Crowder had a real good block. That opened it up, D.J. (Donovan Walker) had a block, and I just seen green,” Hayes said about his 71-yard run.

After a shaky start, the Quips’ defense rebounded by pitching a shutout and forcing two interceptions in the second half. On the ensuing kickoff following Aliquippa’s second touchdown in the second half, Lindsey delivered a huge hit that ignited the Quips faithful. A few plays later, Walker picked off Antwon Johnson’s ill-advised pass and returned it to Central Valley’s 20-yard line. Hayes’ 20-yard touchdown run followed, and the Quips had all the momentum.

“I had a bad first half, but my teammates picked me up. I was kind of quiet like throughout the whole game, so I just figured I had to make a big play in a big game,” Lindsey said about his huge hit on the kickoff.

Hayes and Lindsey both have multiple offers from Division I programs. Hayes, who is just a sophomore, said he has 10 offers.

“I haven’t been too worried about it,” Hayes said about the recruiting process. “I’ve been worried really about the season, so I ain’t really been looking at my recruiting for real.”

“It was the White Out game; you know how those games are. It was crazy. I had a headache after,” Hayes said about the atmosphere at Beaver Stadium.

Hayes was supposed to go to a Pitt game, but he didn’t attend because he twisted his ankle against West Allegheny and wasn’t able to walk on it.

“All of them for real,” Hayes said about what schools peak his interest. “Every D-I school, I gotta visit because it’s an opportunity to play at the next level no matter what school it is. So, all of them. Michigan, I can’t wait to get up there.”

Lindsey is a senior, so his decision of where he’ll play at the next level is in the near future. In the meantime, the Quips linebacker is just enjoying the process.

“Everything has been going great,” Lindsey said about being recruited. “Me and my family are just taking time with everything. It only happens once, so you have to enjoy every second of it.”

Lindsey said it is surreal to be recruited by Pitt’s Pat Narduzzi and Penn State’s James Franklin. “Every chance I get to see them in person (it’s) mind-blowing, because a couple of years ago I was justing watching them on TV playing against the best of the best. I just really enjoy every second of it, no matter what school it is.”

As a No. 1 seed, the Quips will have a first-round bye in the WPIAL Class-4A playoffs.

“Watch film, prep for our first playoff game and their second playoff game. Whoever we get, we got to pound them,” Hayes said.