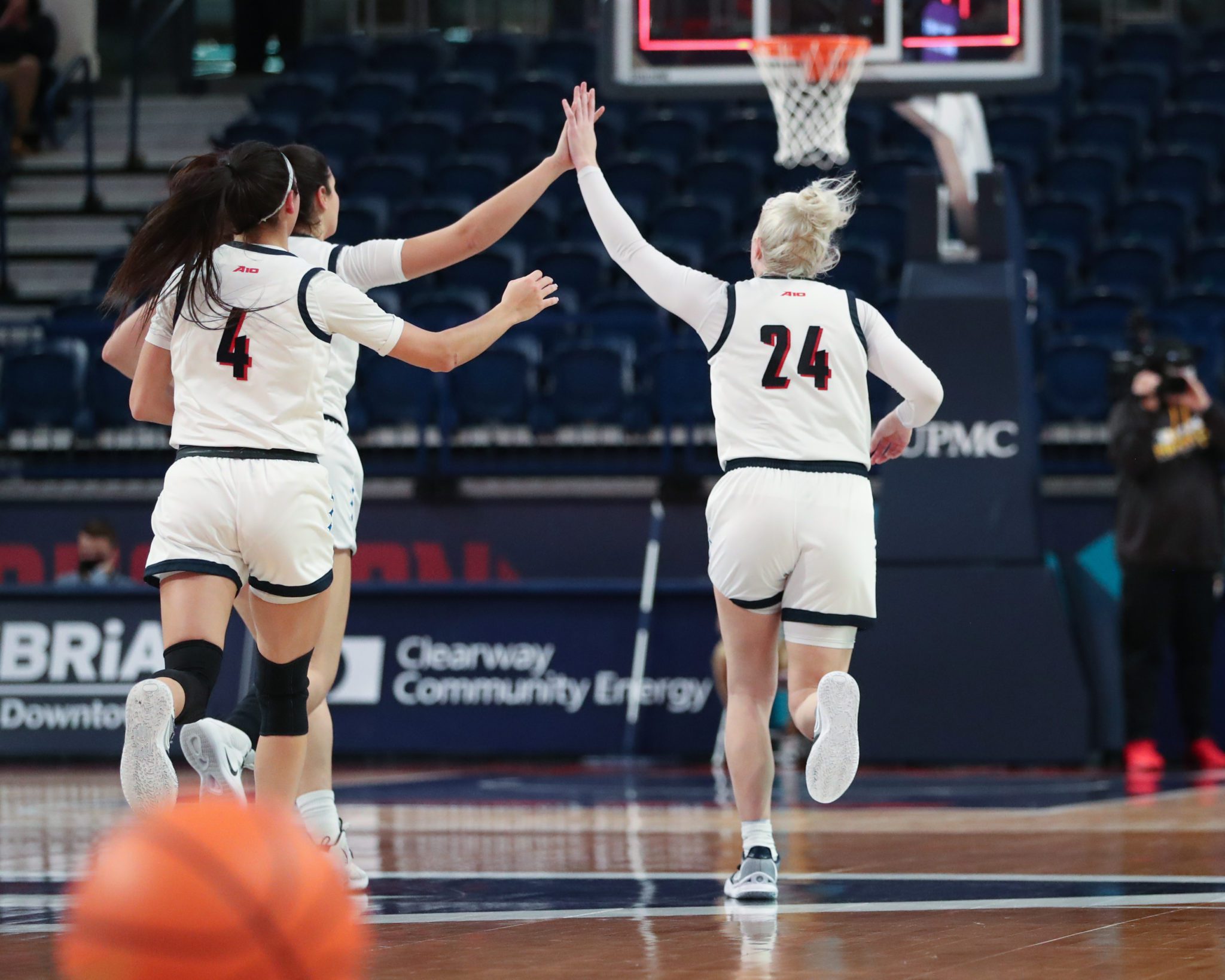 It was the best of times, it was the worst of times for the Duquesne Dukes (2-0) three-point shooting against the Brown Bears (0-2). After shooting less than 30% from three-point range in the first half, Duquesne shot over 50% to close it and get their first win against a NCAA opponent this season, 77-69.

Duquesne lost the tip to start the game, but took the game’s first lead when Naelle Bernard connected on a three-pointer, assisted by Megan McConnell. This wouldn’t be the theme for the first half though, as the team’s shot a combined 9-for-32 (28.1%) from three-point range and 22-for-69 (31.8%) from the field as a whole.

Duquesne had their better quarter shooting in the first when they made 2-for-4 from three-point range compared to just 1-for-6 in the second. Duquesne led in shooting percentage, rebounds and one the scoreboard for most of the first quarter. However, it was Brown that took the lead at the end of the quarter due to foul troubles by Duquesne. They had six in the first quarter and Brown shot 8-for-10 from the foul line, which led to a 20-15 lead at the end of the quarter.

Brown entered the second where they left off and extended their lead to 12-points with 8:01 left in the first half. A seven-point run by Duquesne then ensued, cutting the lead to just five-points at 29-24. Duquesne had multiple big plays as well including three turnovers and three shot blocks, but couldn’t escape their issues shooting. They shot 5-for-17 (29.4%) in the second quarter and were just 1-for-6 (16.7%) from the three-point line. Despite seemingly controlling the tempo for much of the quarter, Duquesne went into halftime trailing 37-30.

Brown was able to get their lead back into double-digits early in the second half when Kayla Jones hit a three-pointer a minute into the half. Duquesne was able to find their footing from the three-point line in the third quarter and hit three consecutive threes to take a lead at 50-49 with a few minutes left in quarter. Brown though, went a five-point run to take a four-point lead back before they chucked up a prayer that went out of bounds with five seconds. Duquesne was able to use the extra seconds to hit one more long three-pointer and head into the fourth quarter only down one at 54-53.

It was a big third quarter for Duquesne, as they shot 5-for-9 (55.6%) from three-point range, more than 25% better than the first half. The foul trouble also calmed down for Duquesne as they had six fouls in the first quarter, but only four total in the second and third quarters combined. That shooting continued into the fourth quarter, in which they shot 5-for-10 (50%) from three-point range. Combined in the second half they were 10-for-19 (52.6%).

Brown got the lead back to start but a 9-2 run gave Duquesne their largest lead since early in the first quarter at 70-63. In the midst of that, McConnell hit a three-pointer that gave her a trouble-double in the game. She finished with 10-points, 10-assists and 13-rebounds, the first triple-double of her collegiate career. She also led the team in rebounds and assists. For the rest of the leaders for Duquense, Tess Myers led in points with 16 while McConnell and Ayanna Townsend had two blocks each. Isabella Maurcicio for Brown led the game in scoring with 26-points while McConnell led in rebounds and assists.

Duquesne’s next game will be against Manhattan (0-2) this Sunday at the UPMC Cooper Fieldhouse. They then will travel down the road to play Pitt (1-0) in the women’s basketball city game on Saturday, November 19th.

Inside the Dukes: All-Around Effort With Plenty To Improve