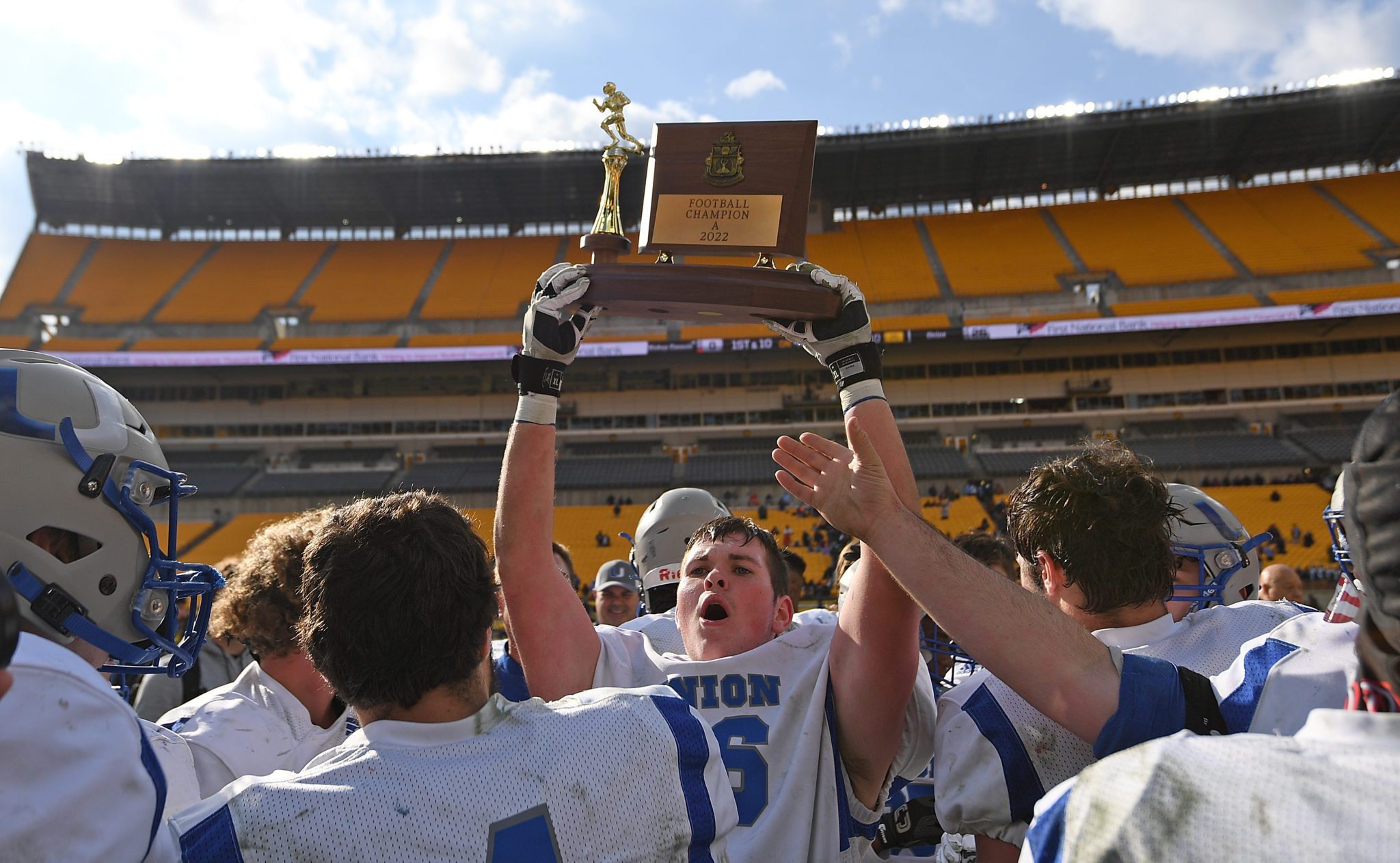 PITTSBURGH — A herculean defensive performance by Union led the No. 10 seed Scotties to a 26-0 upset over No. 1 Bishop Canevin in the WPIAL Class-A championship on Friday at Acrisure Stadium. It’s the first time since 1959 that the Scotties have won a WPIAL title.

Two rushing touchdowns by quarterback Braylon Thomas and two defensive touchdowns were enough for Union to take down the defending WPIAL Class-A champions. The Scotties forced a whopping four turnovers and pitched a shutout against the high-powered Bishop Canevin offense. Coming into the WPIAL final, the Crusaders averaged 41.8 points per game.

Union struck first, as Thomas scrambled for a 6-yard touchdown to put the Scotties up 8-0 with 2:46 left in the first quarter. Thomas found Grayson Blakley in the end zone for the two-point conversion. The Scotties got a couple of sacks on Bishop Canevin’s prior possession, which granted Union great field position at Bishop Canevin’s 32-yard line following the punt.

After another defensive stop, Thomas led the Scotties down the field on a long methodical drive, but it stalled at Bishop Canevin’s 20-yard line after a failed fourth down conversion. Union dominated the time of possession in the first half, as the Crusaders struggled to put together drives.

Following the turnover on downs, Union defensive lineman Jamel Mitchell forced Bishop Canevin quarterback Jason Cross to fumble, and the Scotties came up with the loose ball at the Crusaders’ 29-yard line with just under six minutes remaining in the first half.

Bishop Canevin came up with a defensive stand as the Crusaders stopped Thomas a yard short of the end zone on a fourth-and-goal scramble from 10 yards out. On the previous play, Thomas had a wide-open Kaden Fisher in the end zone, but he failed to haul in the pass.

Backed up on their own 1-yard line, Bishop Canevin ran the ball three straight times and went into halftime trailing 8-0. The Crusaders compiled just 23 yards of offense in the first half.

After a quick defensive stop to start the second half, Thomas broke free on a 38-yard touchdown run to put the Scotties up 14-0 with 5:40 left in the third quarter. Union failed to convert on the two-point attempt.

Thomas does it again! @amazingbraytho with a 38-yard touchdown run. Union fails going for two but it's now a 14-0 lead.@UnionScotties 14@CrusadersFball 0
5:40 | 3Q

On the ensuing drive, Union outside linebacker Matt Stanley stripped Bishop Canevin running back Marquis Carter and returned it 32 yards for a touchdown to give the Scotties a commanding 20-0 lead. Stanley literally ripped the ball away from Carter and was off to the races. Union once again couldn’t get into the end zone on the two-point attempt.

Things just got worse for the Crusaders as Mike Gunn picked off Kole Olszewski’s ill-advised pass and returned it 59 yards for a touchdown to give the Scotties back-to-back defensive touchdowns, and a 26-0 lead. Union failed to convert on the two-point attempt for the third consecutive time.

Bishop Canevin never rebounded from the two defensive scores, and the Scotties pulled off a massive upset to be crowned the WPIAL Class-A champions.