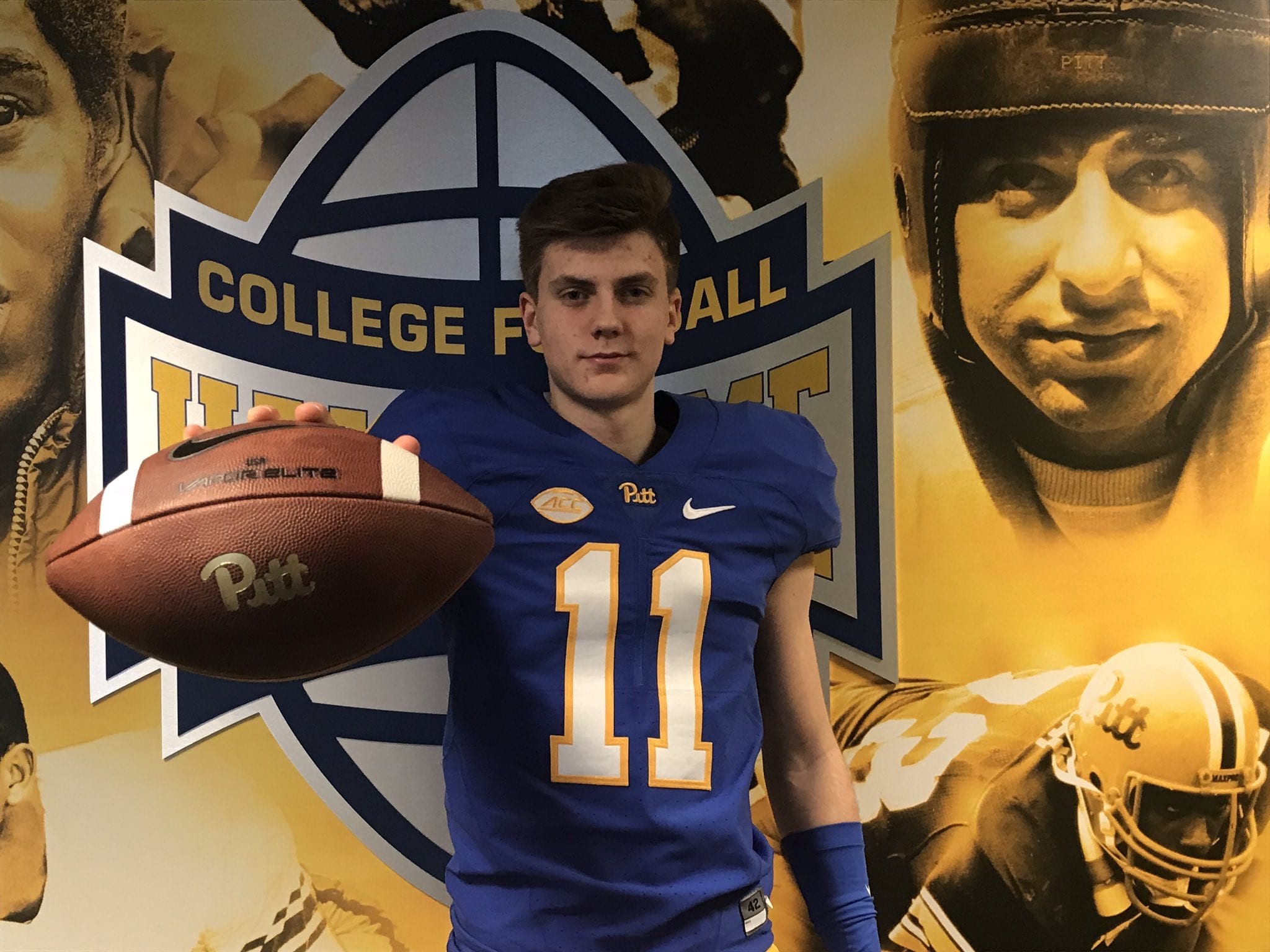 Christian Veilleux enjoyed his visit to Pitt the first time around, but he knew then it wasn’t a fit. Or rather, he didn’t think he’d be a fit in Pittsburgh.

He didn’t think Pitt was what he was looking for. And his recruiting process, as a four-star quarterback in the class of 2021, would eventually narrow down to Clemson, Duke, LSU, Penn State and Tennessee. He’d choose the Nittany Lions.

After two seasons at Penn State, with just one chance to showcase his talent in extended action, he entered the transfer portal in December. It was a quick process.

Veilleux, despite his growth at Penn State, wanted to give himself a fresh start.

He got his fresh start, but he wasn’t exactly unfamiliar with his new location either. He’d visited Pittsburgh before, liked his experience in the city and he immediately heard from Frank Cignetti Jr. upon entering the transfer portal.

Cignetti originally tried to recruit Veilleux to Boston College, but while the relationship didn’t result in a connection then, it helped the second time around. Cignetti was a big reason why Veilleux committed to Pitt in December.

“I felt a really good connection, really good vibe from (Cignetti) and coach Narduzzi and Jon DiBiaso,” Veilleux told PSN Wednesday. “I felt a lot of love from those guys. (Pitt has) a great business school, especially with their finance program, that’s what I want to study, I couldn’t do that at Penn State, and I can do it at Pitt.”

So, while he’s excited about his education, he’s also excited about the opportunity to play football with a ‘really good team’ at Pitt, too.

“I think this time around, the relationship with Narduzzi and Cignetti, being in the city of Pittsburgh as well, I think my perspective on Pitt really changed throughout this whole process,” Veilleux said. “I really learned to see the value in the school and the coaches and the program and the team. I felt like it would be a great fit for me.”

It was a great fit for Veilleux even though he made the daunting jump from Penn State to Pitt, crossing in-state lines in a rivalry that spans 83 games dating back to 1915. The prior history, which may have put off others, wasn’t a factor at all.

“I’m from Canada, so I don’t really get the whole rivalry thing,” Veilleux said. “For PA people, it’s a big thing. But for me, it didn’t even cross my mind a single time.”

It just happened that Pitt — amidst constant contact with the coaching staff and a great official visit — made sense. It felt like the right place to be in the end.

Veilleux arrives with one pseudo-start under his belt — taking over for a sick Sean Clifford against Rutgers. Clifford started the game 2-of-8, giving way to Veilleux just before the end of the first quarter, and he responded by leading the Nittany Lions to a 28-0 win.

In just over three quarters, he completed 14-of-25 pass attempts for 235 yards and three touchdowns — throwing touchdown passes to three different receivers, including his first collegiate touchdown to now-NFL star Jahan Dotson.

“(Veilleux’s) poised,” Dotson said after the win. “He was very poised. Never seemed to get rattled at any moment in the game. Stayed calm, made the right reads. He had a tremendous game. He was everything and more that you can ask for from a freshman quarterback.”

A lack of opportunity in Veilleux’s case, playing sparingly in five games over the last two seasons, simply delayed his arrival. He believes he’s the prototypical quarterback to run Cignetti’s pro-style offense.

“I think when you talk about physical traits, I think I’ve got everything he’s looking for,” Veilleux said. “And I also think my athleticism brings another element to the table which he can use to expand the playbook and expand his playcalling — utilize the quarterback more in the run game. Do more RPOs.”

Cignetti’s pro ball experience, a system that surrounds itself with professional quarterbacks that have succeeded, was certainly a draw. “I think that brings a lot of value to what he does because it can be done with the right quarterback,” Veilleux said.

However, he’s also surrounded by a former Cignetti-coached quarterback in Boston College transfer Phil Jurkovec, too.

Veilleux hasn’t met Jurkovec, but he’s excited to once the pair are on campus together. He’s seen the work Jurkovec has put in throughout his college career, and he’s certainly excited to learn from the older, more experienced quarterback, and build that relationship. But it’s also still a competition.

“I mean, I didn’t come to Pitt to sit on the bench,” Veilleux said. He intends to start.

He also intends to follow the path laid out for Pitt quarterbacks left by Kenny Pickett.

“I wanna do what Kenny Pickett did, but do it even better and bigger,” Veilleux said. “He set a great path for Pitt quarterbacks and the success he’s had is what any other quarterback would want.

“So, that’s what I want to come in and bring to the table and I want to get people to fill those seats in Heinz Stadium or whatever it’s called now, I think the city of Pittsburgh loves Pitt football, so I want to bring that element back to the city.”

Veilleux sees a similar yet different style of player when comparing himself to Pickett. He doesn’t like to compare himself to other people generally, but he’s definitely going to sit down and watch the tape on how Pickett played the game — learn from the best.

Pickett, of course, is the starting quarterback for the Pittsburgh Steelers now. So, he hasn’t gone far. If Veilleux wants to find Pickett, all he has to do is go to the other side of the South Side complex. And he certainly plans to do so.

“The fact that the Steelers are literally right next door and you can watch them practice, I look forward most to trying to ask those guys questions and using those guys as resources and getting my foot in the door with those guys,” Veilleux said.

Veilleux is a Pittsburgh quarterback now, and he intends to follow in the footsteps of Pickett, all the way to the NFL.

I love the enthusiasm and the confidence.

I think attitude that was the missing link between Pickett and Slovis. Slovis did not command a presence in the locker room or the huddle like Pickett did.

It is my suspicion that Pat Narduzzi will be looking for QB’s with moxie. I am confident he will get that with Jurkovic. If this young mans skill and ability matches his confidence we have much to look forward to in the next several years.

Where does Nate Yarnell fit in here? He committed to Pitt out of high school and has played well in all the action he’s seen

I agree, Nate has looked good in the little bit of playing time he has had.

Hope he sticks around. Looked genuinely pissed when he was pulled from the bowl game after just two plays…must be a real competitor.

If I’m Yarnell I look at it this way, if he’s smart. Jurkovec is going to start, that’ just the reality of bringing in a QB with his experience level, he goes into camp as the starter. Learn from him, you’ll still get reps during the season, and given his injury history, you’re going to play. Going into 2024, it’s between you and the State Penn transfer kid. These kids have to be realistic; Power 5 programs recruit QB’s in every recruiting class, it’s up to you if you want to play, this isn’t high school, Trust me, Duzz learned… Read more »

Appreciate the kid’s confidence, but reality is right in front of him in Jurkovec and Yarnell. Those two have both played in Cignetti’s offense and have productive in that offense, Sorry kid, but I doubt you play in front of Yarnell and Jurkovec came here with one season left to start as he was recruited to do. Like the kid’s ability and talent, but you have to question his decision making. With the list of offers he had coming out of high school, why in hell would you go to a school like State Penn that doesn’t develop QB’s and… Read more »

While I’m a Pitt fan, let’s pump the brakes on knocking our eastern neighbor regarding their lack of QB development: Trace McSorley is in his 4th NFL season. Like McSorley, Sean Clifford is a likely NFL career backup; A guy that gets picked on the 3rd day or catches on as a free agent. Drew Allar appears to be the real deal and will likely play 2023 & 2024 in Happy Valley and then become a 1st-round draft pick. Lastly, Veilleux committed to PSU before Allar arrived. Veilleux wasn’t going to beat out Allar. Hence, the transfer to Pitt. Veilleux’s… Read more »

Allar is the real deal, and with all the young talent around him it’s going to be an amazing offense and defense next year.

With all the excitement coming from you i worry about the children in your general vicinity. We are Ped State, we are ped state…

my lawyer will be contacting you regarding these libelous and defamatory statements.

Wait, shi*t develops QB’s? Marino and Cavanaugh were 40 years ago and Pickett succeeded without help from duzz (who doesn’t develop qb’s). He went to PSU to play in front of 107k in the best football conference in the NCAA. He sees the writing on the wall and knows Drew Allar’s skill set. #1 ranked QB and 5*. PSU has so much young talent it will probably win the Natty next year. He’s not starting until Phil gets hurt, which will happen. No rivalry from PSU perspective. s*itt desperately wants one just like rutgers does but PSU laughs at little… Read more »

Natty title lol Not with no game James at the helm. Remember that fake punt in the bowl game last year? He can’t beat Michigan or Ohio state and now Wisconsin is in the mix you’re simply not living in reality.

They can’t reliably beat Iowa. How are they going to win a national championship?

He’s beaten them all (BigTen champs in 2016). FYI…nobody else beat OSU and UM until the playoffs

Best football conference in the NCAA? I guess you’re right, Pitt did travel to Rocky Top and play an SEC team 2 seasons ago. Now that’s a good conference.

Folks you heard it hear first. Ped state will win the national championship next season… Lol.

PSU winning a natty in 2023, considering that they haven’t beat OSU since 2016 and that Michigan has become the B1G team to beat? This take brought back memories of a year where USC considered themselves a title contender and I’m thinking, “How about being the best team in Los Angeles?”. With Allar and a lot of young returning talent, PSU has an opportunity to break through these next 2 seasons. However, until that happens, PSU is the third-best team in the B1G East. If finishing 3rd in the B1G East is better than being in annual ACC title contention,… Read more »

Well constructed conversation PittFanDeez. I do think finishing behind OSU and UM this year is better than contending for an ACC title. Now that Florida State and Clemson are back, with UNC and Miami coming up, pitt’s acc titles are a thing of the past. acc will be gone in a few years anyway, Clemson, FSU and Miami are all leaving and they have an awful TV deal

Take your state Penn supporting ass somewhere else. They will never win another national championship again. They will always be known as a program who supports pedos.