Another talented Pitt defensive lineman is taking their talents to the NFL.

Today, on Instagram, Pitt senior defensive end Haba Baldonado officially announced that he would be entering the 2023 NFL Draft. Due to the extra year created by COVID, Baldonado had the opportunity to return for another season. 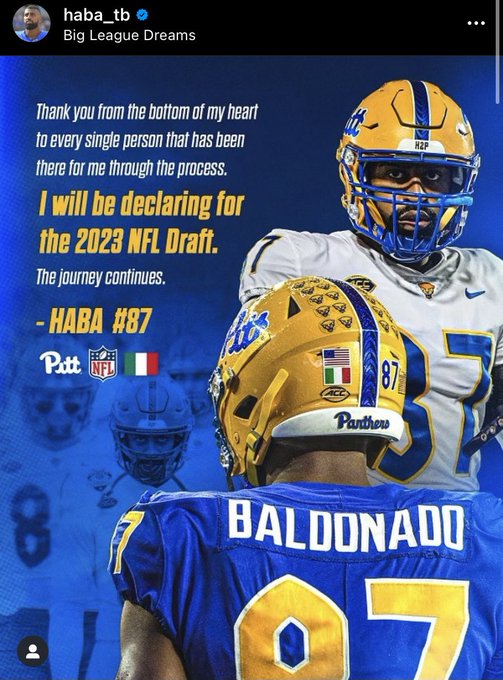 In four seasons on Charlie Partridge’s defensive line, Baldonado developed and got better every season, as he finished his Pitt career with 98 tackles, 21.5 tackles for loss, 15 sacks, a forced fumble, two recoveries and two pass breakups. He earned All-ACC honors in 2021, when he compiled 41 tackles, nine sacks, one forced fumble and one fumble recovery.

Baldonado has the size, physical tools, football IQ and leadership to be the next Pitt defensive end to make the jump to the next level and succeed.

This announcement didn’t come as much of a surprise considering Baldonado had already accepted an invite to play in the East-West Shrine Game. The Feb. 2, 2023 game will be played at Allegiant Stadium in Las Vegas, Nevada in front of NFL front office members, coaches and scouts.

Good Luck and thank you for the great play!
H2P!!!

Next man up !
Good luck Haba !

Best of luck to the young man

Big mistake! He didn’t have a great year! Should have stayed!

After receiving this news, it would have been nice if John Morgan would have stayed with Pitt for another year — especially since he ended up staying in the college football ranks. It would have been beneficial to the younger players to keep at least one experienced top-performing leader on the D-line. Oh well, next man up…