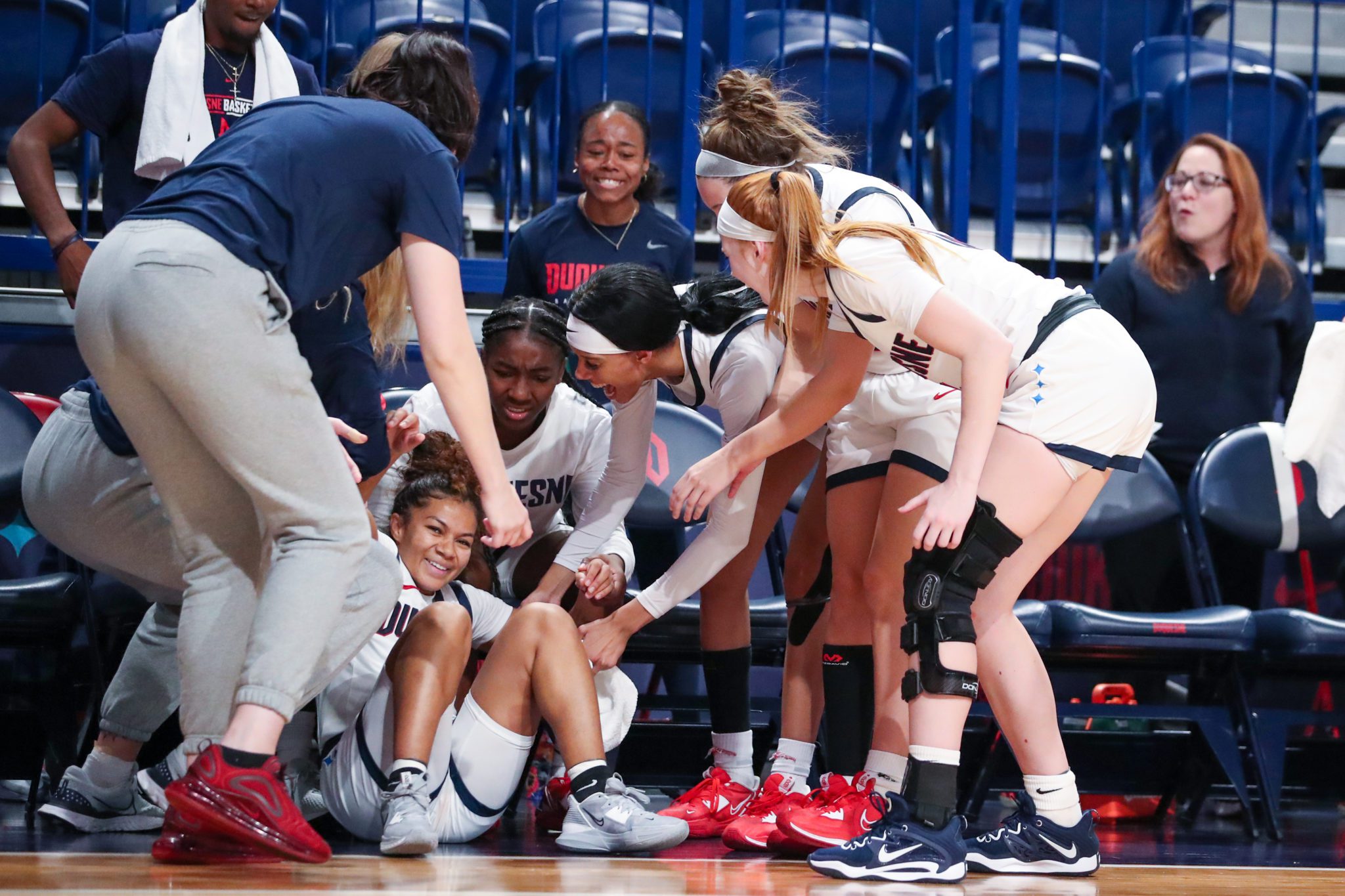 Bernard, who consistently puts up extra shots in the gym, may have found the shots soothing, but it was the advice from a friend that she credited towards helping her achieve a career-high 23 points in a 69-38 victory over St. Bonaventure Wednesday night at the UPMC Cooper Fieldhouse.

“It means a lot for me because the last couple of games I haven’t been happy with the way I was shooting the ball,” she said. “Yesterday one of my friends gave me the best piece of advice someone could’ve given to me, he told me ‘screw it, when you’re open, if you’re set, screw it.’ My teammates did a good job of finding me wide open, so I said, ‘screw it.'”

Indeed, Bernard utilized that advice early and often as she matched her personal best of six consecutive three-point baskets.

While Bernard did benefit from St Bonaventure face guarding Tess Myers, she routinely punished the Bonnies for leaving her open and found success.

“It gives me a lot of confidence, that’s everything you dream about when you have teammates,” said Bernard. “They give me confidence and are the first ones to tell me to shoot it.”

If such success continues, it could be that opponents may not be able to slight Bernard and instead have to pick their poison as to which player to tightly guard.

By all means, Duquesne coach Dan Burt was not completely pleased with the victory despite this margin, there were not enough kind words he could say about his guard.

“She’s arguably the hardest-working player that I’ve ever coached,” he stated. “That says a lot because I’ve had a whole lot like Vanessa Abel, Rachel Wojdowski and Amadea Szamosi that were all professional players and worked a great amount. Nae is always here in the gym and working really hard on her game. She’s incredibly skilled, every time she shoots the ball you think it’s going to go in.”

An hour after Wednesday’s game concluded, the sounds of music and a basketball echoed loudly in the very same practice gym.

Inside that gym was Bernard once again with her trusty shooting gun. Even after a career night, there was still work to be done.

When Burt met with his team before a 6:30 a.m. practice Tuesday, he challenged them. It was clear there was disappointment and perhaps embarrassment after a 61-45 road loss to George Mason.

He explained to the team some changes made to various actions, but he told them that he wants to win an Atlantic 10 Championship and wants that mindset to be contagious across the board.

Throughout the practice, players would be challenged to be aggressive and rebound.

Burt explained that Duquesne responded by having a good practice Tuesday and then had a gameday shootaround he viewed as the team’s best practice in a couple of years.

Duquesne set a standard in the first quarter, talking on defense and holding St. Bonaventure scoreless for the first 3:41 of the game.

It is no coincidence that the Dukes recorded 56 rebounds, setting a new season high in the process.

“There were a lot of rebounds to be had, and we came up with them,” Burt said. “56 is a number you don’t typically see. I thought Amaya (Hamilton) going to the glass tonight, we challenged her to do that and will continue to do that. When she can offensive rebound like that, it just makes us a really tough team to beat.”

Hamilton tied career highs with her 13 rebounds and five offensive boards in the victory, all while earning her fourth double-double of the season.

Throughout the Tuesday morning practice, Burt was most constructive towards Hamilton and what he challenged her on she excelled at come game time.

Admittedly, Burt stated that he had regrets on how he coached Hamilton last year and that she took the brunt of a lot of frustration. Despite this, Hamilton refused to quit and was frequently in the gym.

“When I was a freshman, I would let it get to me, but now I definitely feel that I have matured and been able to take his advice and make something of it,” she said. “I made an effort to offensive rebound, that’s what he was harping on me to do yesterday in practice. I really appreciate him believing in me and then I always want to execute.”

Burt was pleased with her rebounding, going the length of the floor and having further success by attacking the basket.

All told, Hamilton is in a good spot and Duquesne regained its footing after a disappointing weekend.

“It’s a situation where Amaya and I wanted the same thing, her and the team to have great success and that has happened this year,” said Burt. “I am so happy for her.”