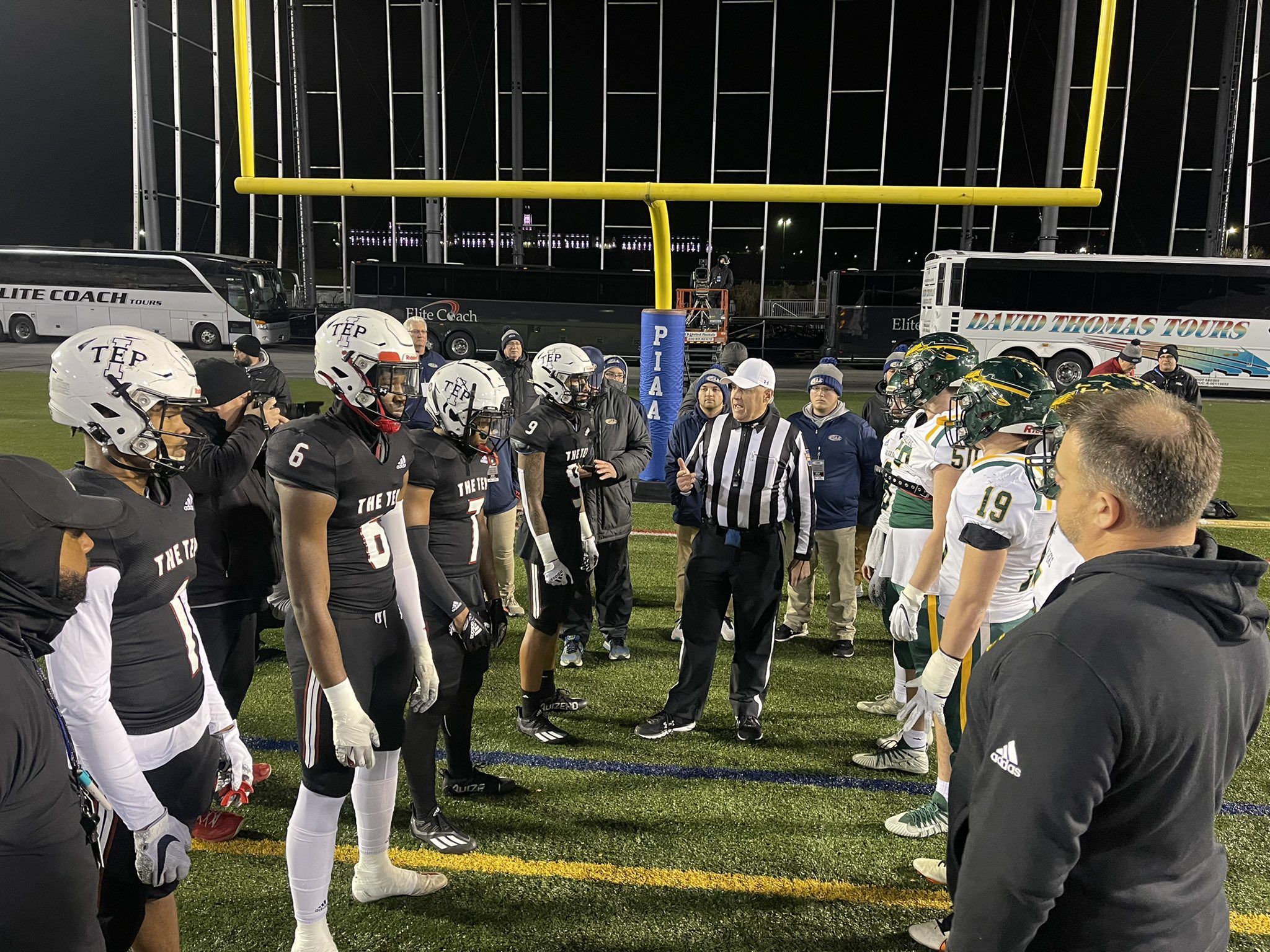 And Yacamelli just happens to play for Penn-Trafford.

While the bus ride to Heinz Field for the first ever WPIAL title was a bit shorter, the wait for the ride out to Hershey, Pa. makes it that much sweeter for Yacamelli and Penn-Trafford’s first ever PIAA title in an overtime thriller.

With a 17-14 win over Imhotep, it was the all-around offensive prowess of Yacamelli that willed the Warriors to victory. But it took a healthy dose of overtime to get there.

Penn-Trafford opened overtime with the ball, starting at the 10-yard line. A couple of Yacamelli rushes set up a third-and-goal from the 2-yard line, and a false start moved it back to the 7, and the pass from Green fell incomplete. A Schlessinger field goal gave the Warriors a 17-14 lead.

Imhotep lined up needing a touchdown to win it, but the Panthers jumped early too. With a first-and-goal from the 15, the Panthers got five. A bad snap soared over Imhotep’s Mikal Davis’s head and set up a third-and-goal from the 26. The third down dart over the middle fell incomplete, and the fourth down play resulted in a sack.

Penn-Trafford won the opening coin toss and elected to receive the ball. P-T’s Carter Green returned the ball back toward midfield, after a false start, but the star-studded Imhotep defense imposed its will early.

With Penn-Trafford facing an early third-and-12, the Imhotep defense forced Green on the run, and the Panthers’ Jahsear Whittington knocked the ball out of Green’s hands during the tackle and teammate Enai White recovered.

However, the turnover was just the beginning of a quarter that featured almost exclusively defensive prowess leading to four consecutive drives ending with punts — two for each side.

Imhotep’s Tre McLeod finally got the Panthers moving toward the end of the second quarter, spurring Imhotep into the red zone. And with a third-and-six call from the Penn-Trafford 12-yard line, Imhotep finally utilized all of its top stars. Rahmir Stewart lined up in the backfield, with Enai White lined up as a blocker outside and Keon Wylie motioning over as an additional blocker.

Stewart took the direct snap, followed White and Wylie into the end zone to break open a scoreless tie.

And if Imhotep was going to use its elite college talent, Penn-Trafford was going to answer back in kind. P-T’s Cade Yacamelli caught a nice 20-yard toss from Green on a comeback route before busting a 36-yard run in which he spun, leaped and rolled down inside the 2-yard line. A few plays later, he capped the drive with a 1-yard dive into the end zone.

P-T’s Nathan Schlessinger booted an extra point through the uprights to give the Warriors a one point lead going into the halftime break. And the defensive slugfest resumed in the second half, with both teams once again trading punts.

With Imhotep finally getting into a bit of a rhythm, leaning heavily on a steady dose of McLeod runs, a fourth-and-two conversion attempt was stuffed at the line by P-T’s Daniel Tarabrella to swing momentum back toward the Warriors. But a quick three and out gave the ball right back to the Panthers.

With an all-around defensive effort limiting Penn-Trafford to just one score, Imhotep needed someone to step up on offense. And it was McLeod who continued to bear the burden. With 34 hard yards, McLeod set up a 5-yard rushing touchdown for Stewart to retake the lead midway through the fourth quarter, and a successful two point conversion made it a seven point lead.

With 7:29 left in the game, and just 127 yards of offense, Penn-Trafford needed a spark offensively — whether it came from Yacamelli or otherwise. P-T couldn’t get it, and Imhotep got the ball back. But, as it had all game, the defensive slugfest gave the Warriors another chance.

So, with 4:01 left on the clock, 127 yards of offense, Penn-Trafford got one more chance on their own 44-yard line. Green hit Liam Hileman to convert a third-and-five near midfield and followed with a screen to Yacamelli to move inside the 30. With a fourth-and-10 from the 27, with 2:11 left, Green threw a pass to the end zone for Yacamelli, but a defensive pass interference call kept the Warriors alive.

A third-and-one from the 4-yard line, set up by a Yacamelli dive, managed to pick up a key first down. With 49 seconds left, Penn-Trafford had a first-and-goal. And a jump pass from Conlan Greene to Jack Jollie on a perfect trick play allowed the Warriors to tie the game with 34 seconds left.

And the overtime period went Penn-Trafford’s way when it mattered the most.

Penn-Trafford took their WPIAL title and one-upped it with a PIAA title in the same season, both serving as firsts in team history.