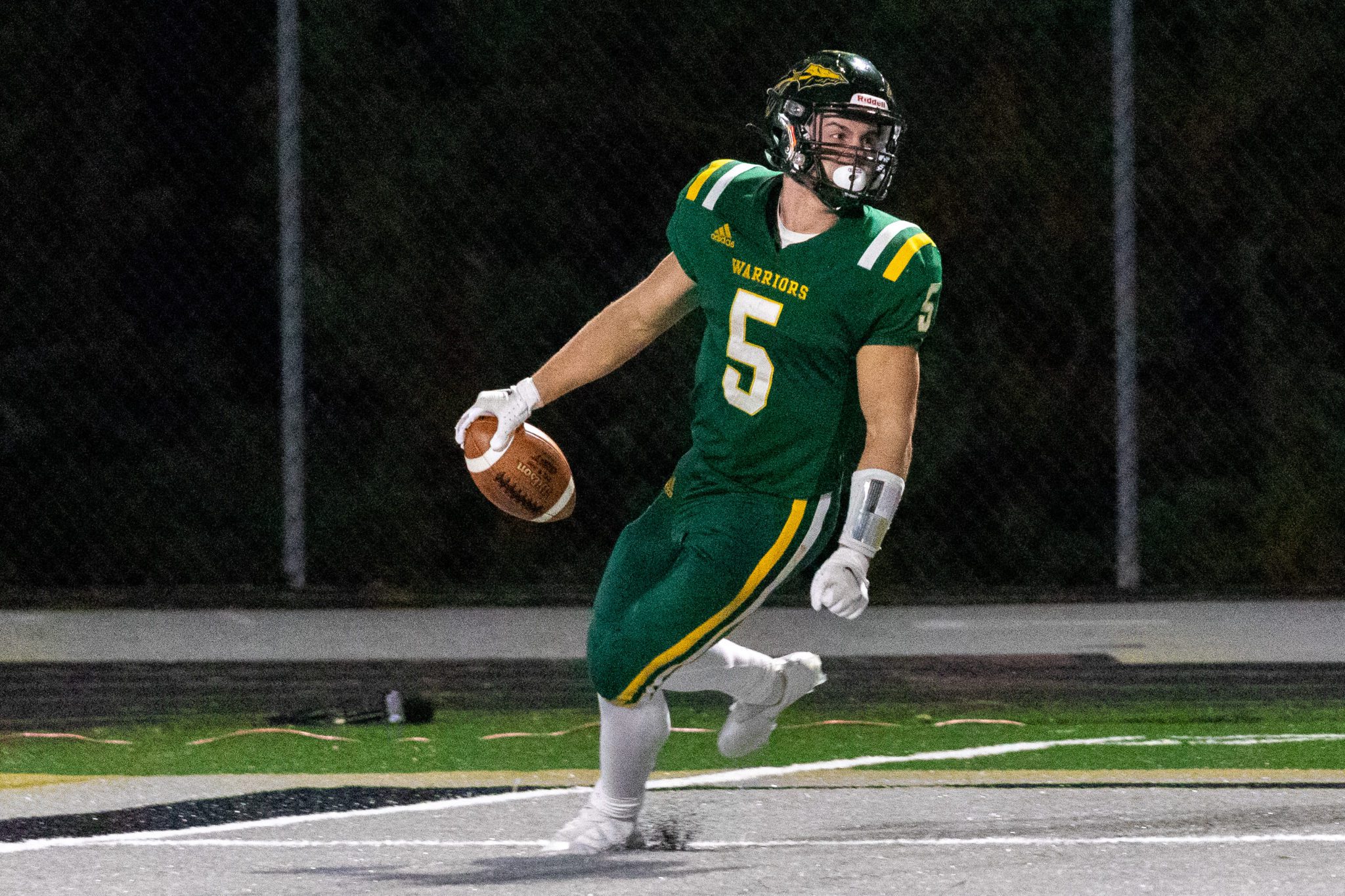 Penn-Trafford senior Cade Yacamelli mustered a wry smile following a 24-6 win over Pine-Richland Friday night at Antimarino Field. P-T’s star (future Wisconsin Badger) fumbled his first touch of the WPIAL Class 5-A semifinal game, and instead of letting it linger in his mind, he flushed it down the drain.

“When it first happened, I kinda wanted to stab myself, so to speak,” Yacamelli told Pittsburgh Sports Now.” But then I was able to flush it, like a good senior should, flush it, regroup and continue to play. It worked out.”

It didn’t take long for Yacamelli to flush it either, immediately called upon to fix his unlikely error. With P-R quarterback Ryan Palmieri rolling out of the pocket inside the P-T 10-yard line, he had teammate Jeremiah Halsey (future Duke Blue Devil) open in the flat.

Yacamelli, caught in-between, did the only thing he could. When Palmieri released the ball, Yacamelli soared into the air and deflected the ball with his fingertips, batting down a potential go-ahead touchdown early in the first quarter. A couple of plays later, the P-T defensive line surged forward and stuffed P-R on fourth down, the first of three fourth down stops in the first half, held the Rams scoreless.

According to Penn-Trafford head coach John Ruane, the defensive performance put forth by his team Friday night was the best he’s seen during his now 11 years with the program. Yacamelli, who also intercepted a heave from Palmieri at the end of the first half, credited his teammates in fueling the best defensive performance of the season.

“It’s not just me,” Yacamelli said. “I mean, me and my buddies go into the gym after every Sunday in between games — between weeks if that makes sense. It’s not just me working. Everybody on this team is a hard worker, we’re dedicated, we’re relentless and most importantly, we’re a family. And that’s what makes Penn-Trafford, Penn-Trafford.”

The Penn-Trafford defense limited Pine-Richland to just six points, coming off a Palmieri bomb to junior Cam Mellis from just beyond midfield late in the fourth quarter, and forced Palmieri to shoulder the offensive load for P-R all night.

While a 3-0 halftime lead was the result of a defensive slugfest from both squads, Penn-Trafford’s duo of senior Carter Green and Yacamelli wore down Pine-Richland over the course of the second half. Yacamelli flashed his defensive upside in the first half and his offensive dominance in the second.

With a 33-yard touchdown to make it a 10-0 game in the third quarter, Yacamelli patiently waited for his offensive line to create a gap and he cut through the hole, barrelling through arm tackles on the way to the end zone. His second rushing touchdown wasn’t as flashy, crashing into the end zone from a couple of yards out, but his third was a microcosm of how Friday night’s game went.

Pine-Richland, trailing by 11 late in the fourth, decided to attempt an onside kick. Penn-Trafford recovered, and Yacamelli did the rest. His game-icing touchdown came on his third rush of the drive, all three picking up first downs as he put the game away for good.

The 24-6 win not only avenged a loss in the 2020 WPIAL 5-A semifinals to Pine-Richland, but it clinched Penn-Trafford a date next Saturday night against No. 1 seed Moon in the 5-A championship at Heinz Field. Yacamelli believes this is the year for P-T, but it’s still a long-awaited dream come true.

“All I can say really is, God is great,” Yacamelli said. “It’s been a dream of mine, I’ve been praying on this moment and for it to finally come is unbelievable.”

Even with Moon coming into next Saturday’s championship game unbeaten, in the midst of its best season since 1998, Yacamelli believes Penn-Trafford has what it takes. And it’s going to take a complete team effort, a mistake-free game, but he believes.