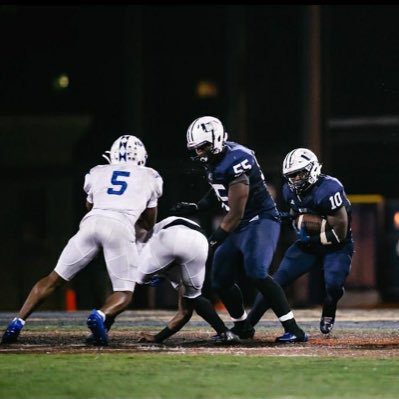 Tim Salem and Pitt have known about and have recruited JaSire Peterson for quite some time, but didn’t formally extend him an offer. That changed on Monday as the Panthers became the latest team to officially get involved with this now available lineman.

Peterson (6-foot-5, 270 pounds) is a Class of 2023 four-star offensive tackle from Union City, New Jersey. More teams will start offering him because of his recent decision to de-commit from Rutgers. Peterson committed to his hometown school back in January 2021 but decided a couple weeks ago to open back up his recruitment.

Peterson spoke with Pittsburgh Sports Now on Monday about Pitt and more about his recruitment.

“I found out about the offer real early like 6:40 a.m. in the morning from Coach Salem,” said Peterson. “They told me that they re-watched my film, and they gave me a really good grade. The head coach really liked my film and said that they had to offer me. I really appreciate the offer because Pitt is a great program, obviously because they just won the ACC.

“Since I de-committed, a lot of schools have been hitting me up now. Pitt was hitting me up a lot before I de-committed, so they’ve been hanging with me for a while now. As far as my recruitment now, I’m just waiting for the dead period to end so I can get out and see some of the schools that I have offers from now and if more offers come, go visit those schools as well. I’m going to be really busy this spring.”

Peterson was scheduled to make an unofficial visit to Pitt the last weekend in January but wasn’t able to make it after getting snowed in back in New Jersey.

“Pitt believes that I’m the type of lineman that they’re trying to bring into their program, guys far can get out into space and run and that can get out into the second level,” said Peterson. “Pitt has shown that they can develop lineman so that’s important to me. My goal and endgame is to play at the next level. Right now, I believe that I’m a better run blocker and better at the tackle position, but I know that in college I can’t pick the position I play and whatever position my future team needs me to play, that’s what I’ll do.

“Zion, yeah, that’s my guy. Zion and I are from the same city, we grew up together and played on the same Pop Warner team. I then played against him my freshman year before his team got taken off of our schedule. Zion and I go back a few years. Yeah, I expect him to try and recruit me to Pitt, but you can’t blame him though (hah, hah).”

Once the dead period ends, Peterson told PSN that three schools that he will be visiting are Pitt, Boston College and West Virginia.