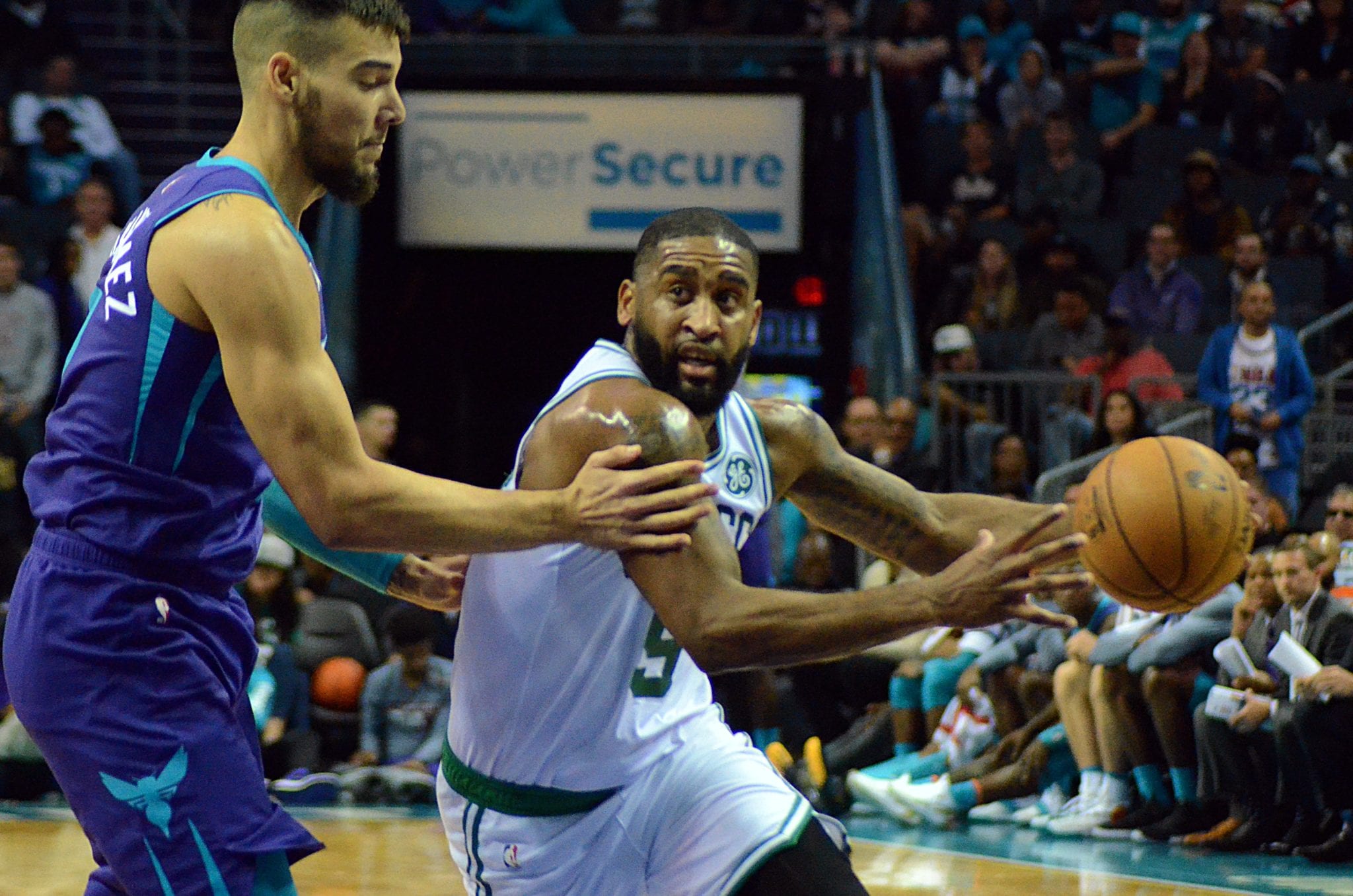 CHARLOTTE – There was four minutes left in the third quarter and the Boston Celtics had a comfortable 13-point lead over the Charlotte Hornets at the Spectrum Center. Star wing Jayson Tatum needed a breather and head coach Brad Stevens looked to his bench, searching for a player who could take care of the ball, lead a second unit and protect the Celtics’ advantage on the scoreboard.

For Stevens, that player is Brad Wanamaker, a former Pittsburgh Panther. The 30-year-old entered the game for the first time that Thursday night and remained in until the final buzzer.

Wanamaker not only helped the Celtics protect the lead, but he had a hand in increasing it. In 16 minutes of play, he racked up nine points, three assists, three rebounds and two steals in a 108-87 win for Boston.

“Brad Wanamaker just keeps that group settled and keeps us in the lead, if that’s the case,” Stevens said after the victory.

In the ninth year of his professional career, Wanamaker finally has a home in the NBA and a defined role for a team with championship aspirations. After playing in Italy, France, Turkey, Germany and the G-League, Wanamaker signed with the Celtics last season, making his NBA debut at age 29. When Boston offered him a $1.4 million deal to return this season, it was a no-brainer for him, even though he might’ve been able to find a more lucrative payday overseas.

“That was the one of the main reasons I came back, for just the stability and being comfortable and just wanting to do it one more time, just seeing how things go,” Wanamaker told Pittsburgh Sports Now. “I just try to lead in each and every way I can. Running a team, whether it’s scoring, defensively, just being a play-maker.”

The Celtics are off to an 8-1 start, saddled in first place in the NBA’s Eastern Conference. They rank ninth in scoring, fifth in scoring defense, second in offensive rating and eighth in defensive rating.

And Wanamaker has played in every game for the Celtics this season. He was once seen as a journeyman guard, stuck in limbo between the G-League, overseas teams and the NBA. Some viewed him as not good enough for the best basketball league in the world, but all Wanamaker has done is prove them wrong.

“I’m just trying to fit in where I fit in,” Wanamaker said. “You know? Whenever my number is called, I just try to go out there and compete.”

So far this season, the Philadelphia native is averaging 4.7 points, 1.9 rebounds and 1.8 assists per-game while shooting 53.3 percent from the floor, 33.3 percent from behind the arc and 88.9 percent from the charity stripe. While those numbers don’t exactly pop off the page, Wanamaker is playing about 10 minutes per-game. In Stevens’ rotation, he has a role.

The Celtics’ head coach continued to praise Wanamaker after he scored 10 points and grabbed four boards in the Celtics 116-106 win over the Dallas Mavericks on Monday.

“Brad Wanamaker has been excellent. That continued from the Charlotte second half to the San Antonio game until now,” Stevens said. “I mean, he’s a pretty steadying hand there, in that group right now where we don’t have a lot of experience.”

Playing for the Boston Celtics, former Pitt guard Brad Wanamaker enters the game against the Hornets on Nov. 7, 2019 at the Spectrim Center in Charlotte, N.C. (Mitchell Northam / Pittsburgh Sports Now)

While Wanamaker wasn’t an NBA star right away, it was clear by the accolades that he racked up in Europe that he had enough talent to play in the league. Wanamaker was a two-time German league all-star, a two-time Turkish league all-star, a German league finals MVP and a Turkish league finals MVP. He won championships in France, Germany and Turkey, and in the G-League. Twice, he averaged more than 16 points per-game in Europe.

Pitt fans have long been aware of Wanamaker’s talents. In 2011, he was an All-Big East selection and a honorable mention All-American. The Panthers made the NCAA tournament each of his four years in school, including an Elite Eight trip in 2009.

Wanamaker of course still keeps tabs on the Panthers. The Celtics’ win over the Hornets was just a day after Pitt beat Florida State at home, 63-61.

Wanamaker is just one of four former Pitt players who are active in the NBA this season. The others are Steven Adams of the Oklahoma City Thunder, Khem Birch of the Orlando Magic, and Phoenix Suns’ rookie Cam Johnson. Only Wanamaker and Adams spent their entire college careers with Pitt, but Wanamaker is hoping that more Panthers will be in the NBA soon.

“(Jeff Capel) has that connection, so, for sure, he’s going to get some guys,” Wanamaker said. “I mean, we got Xavier Johnson right now. I really like his game. For sure, he can be a pro soon.”

.@phillybul_22 grabs the loose ball & pops it out to Kemba in time for a three 💪 pic.twitter.com/S5BmqBdNlJ

Last season was a bit of a disappointment for the Celtics. They won 49 games, but fell in the second round of the playoffs to the Milwaukee Bucks in just five games. Kyrie Irving left in free agency, but the Celtics signed one of Wanamaker’s former Big East foes in Kemba Walker.

Walker and Wanamaker split games in 2011, with Pitt winning in the regular season and UConn getting the upper hand in the Big East tournament. Walker scored 55 points across those two games, while Wanamaker put up 31.

Irving and Walker obviously have some contrasting qualities in their playing styles. But there’s something else that’s different about the Celtics this season too.

Wanamaker can’t quite put his finger on it, and frankly, isn’t interested in searching for the answer. The oldest player on the Celtics is looking ahead, to the next moment, to the next game, to the next time Stevens signals for him on the bench.

“I don’t know. I don’t like to compare. Last year, that experience was that experience. This year is a whole new experience,” Wanamaker said. “It’s a good group here. It’s still early in the season. We’re doing well, we’re bonding well, we just got to keep going the way we’re going.”