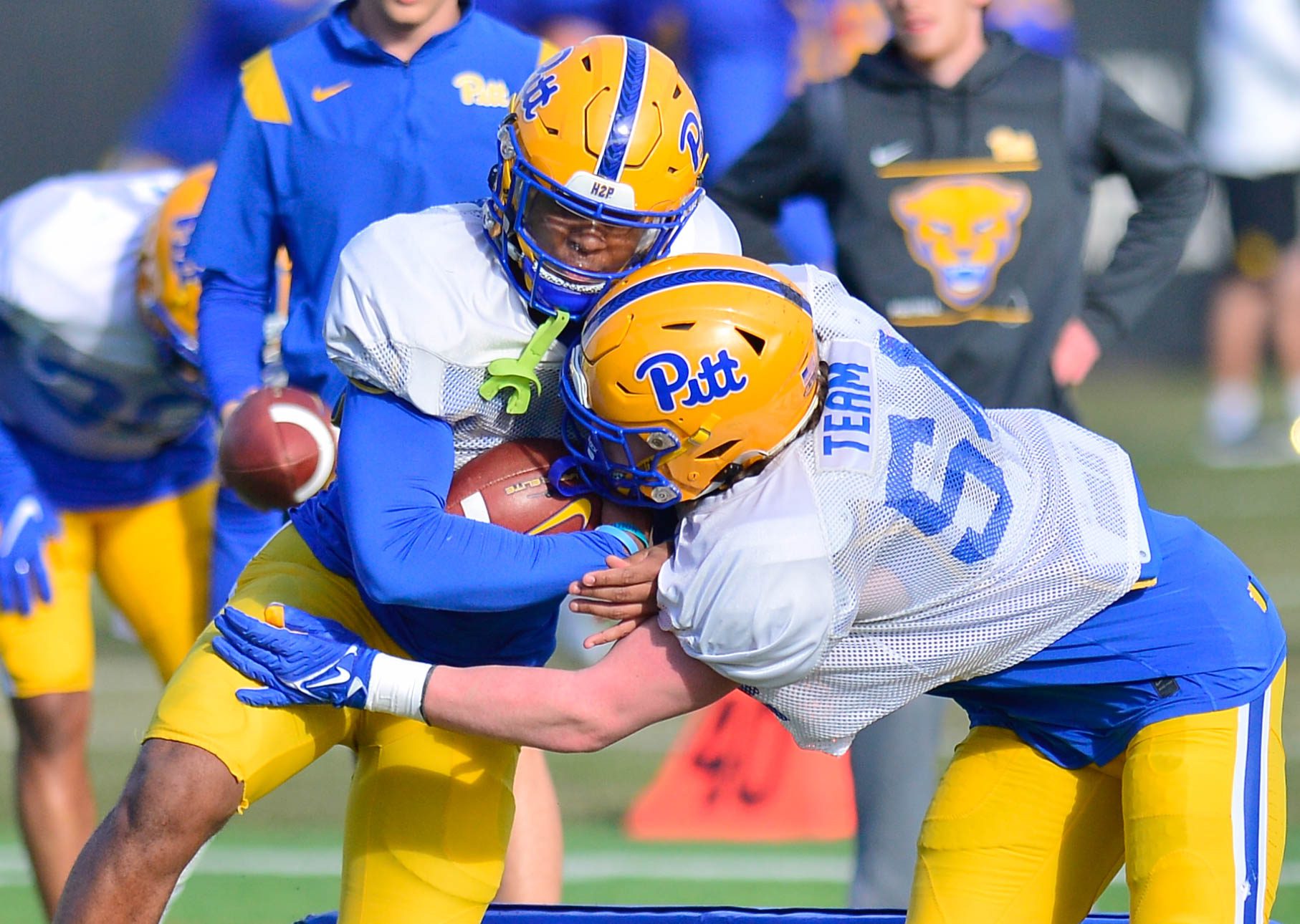 PITTSBURGH — What does a coach say when he’s asked about his quarterback competition in the middle of March?

Well, it’s usually not much. Pat Narduzzi was not much different in his response Thursday, but he did offer some tidbits on Kedon Slovis, Nick Patti and the whole situation. And he touched upon the linebacker depth, some names who have stood out and, of course, how Pitt’s spring has been progressing.

“We’re a third of the way through spring ball now, and as always, there’s good things and bad things,” Narduzzi said after practice Thursday. “Watched Tuesday’s practice and I thought offense had the upper hand. … But today the defense came back and looked really good, so great things, they’re competing, they’re battling back and forth and that’s what you want.”

So, let’s jump into the individual areas that Narduzzi touched upon after practice Thursday.

It’s Too Early to Tell When it Comes to Quarterbacks

Kenny Pickett was once again a visitor to Pitt’s practice Thursday, watching as his former backup and the USC transfer battled for the spot he’s vacated after what feels like a lifetime with the program.

Narduzzi didn’t really want to touch upon the positioning that’s formed after five spring practices, but he was complimentary of the quarterbacks’ room as a whole.

It’s clear that Beville, who played most of the Peach Bowl after Patti’s injury, will serve as the third-stringer once again in 2022, and Yellen will not see the field if not for significant turmoil from the three names ahead of him. The battle between Slovis and Patti may be a work in progress, but Beville’s spot seems pretty sturdy.

In evaluating Slovis’s integration into the program, as one of the newest members of the team, Narduzzi said there haven’t been any surprises when watching him play. He’s the player his tape says he is, and he’s provided a smart quarterback that throws a nice football.

In terms of Slovis adapting to the new location, teammates have spoken to his quick integration, and Narduzzi praised Pitt’s welcoming atmosphere not just for Slovis but all new additions.

“Our guys have always embraced our transfers in here. And around the country, based on as many flying in, you better. But our guys have been great, that quarterback room is good. They’re all together, they work together, they coach each other.”

However, Narduzzi said that despite the instability within the position room and the lack of established starters at the outside linebacker slots, he’s comfortable with the overall — even if the group is behind where he’d like through the second week of spring practices.

“I feel good with our linebacker depth,” Narduzzi said. “The strong survive. Wish (Lavant) luck, you know, saw it coming probably last fall, so it’s good for him and he’ll go find a place he can play.”

SirVocea Dennis is a lock as Pitt’s Mike linebacker, and Shayne Simon appears to be trending closer and closer to a lock at the Money linebacker spot, but the Star position is still in the midst of competition. And while Bangally Kamara was primed as Pitt’s breakout linebacker in 2022, a couple of other guys have put together strong spring performances thus far.

Buddy Mack III dropped down to linebacker this spring, competing for the Star position, after playing as a reserve safety over the last two seasons, and it came down to Narduzzi wanting to field his best players in some way. While Mack probably wasn’t going to edge out Brandon Hill, he has an opportunity at linebacker.

“Buddy looks good, he’s twitchy,” Narduzzi said. “If you guys remember, we moved John Petrishen to the Star position and it took him almost a year. I think Buddy is a little bit further along, he’s learning it, he loves it. You can just see his energy out there.”

With the physicality and quick-twitch ability already in place, it comes down to whether Mack will be able to bulk up to the required weight (currently listed at 200 pounds) and learn the system in time for the season this fall.

Regardless of the losses to graduation and the transfer portal, Narduzzi feels like Pitt will be fine in 2022 — and one of those reasons is Solomon DeShields.

“I do, I do. We’ll be fine,” Narduzzi said. “It’s spring ball … Solomon DeShields is really playing well. After five days, I would tell you coach Bates and coach Manalac are really excited about where he is right now.”

DeShields, a 6-foot-2, 235-pound linebacker from Millvale, New Jersey, has played sparingly over the last two seasons at Pitt, but after finally staking his claim as a linebacker — telling Pitt coaches that he wanted to be a linebacker opposed to be a wide receiver — Narduzzi is confident in his ability to make an impact in 2022.

Another one of the guys competing for the Star slot in 2022, DeShields, Mack, Kamara will continue to fight for the slot and all three will likely provide key play rotationally throughout the season.