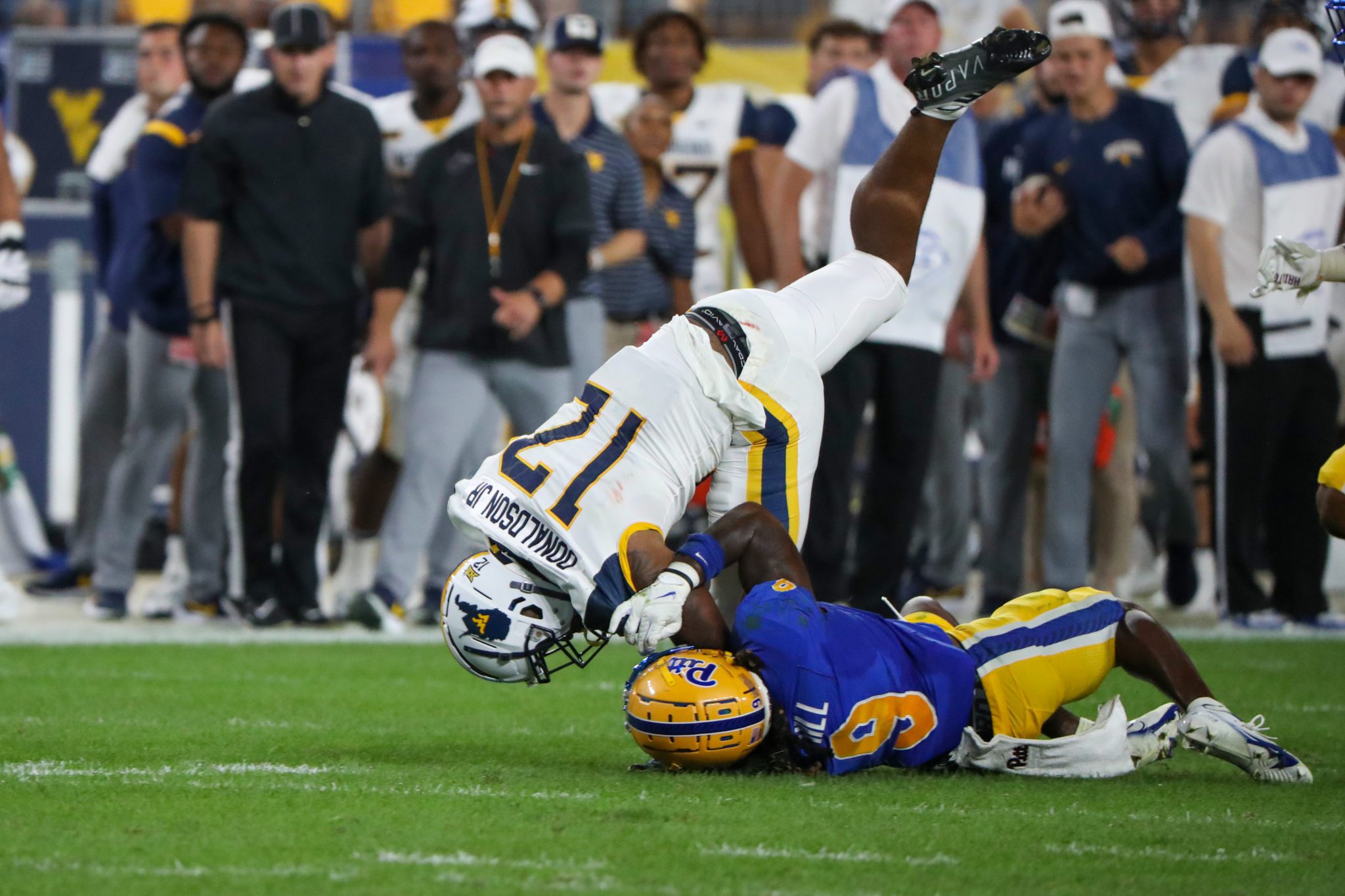 West Virginia’s play pre-snap, which caused fits for Pitt’s defense in terms of communication and execution, may end up being just what Pitt needed to kick the 2022 season off.

There were communication issues, recognition errors as WVU’s CJ Donaldson raced 44 yards on 3rd-and-1 right through the heart of the defense to set up a 1st-and-goal. A play that set up a 10-yard touchdown toss from J.T. Daniels to Bryce Ford-Wheaton in the immediate aftermath. But it allowed defensive line coach Charlie Partridge and Pitt’s staff to teach.

“The biggest thing was some communication issues on the touchdown drive in the first half,” Partridge said Tuesday at the UPMC Rooney Sports Complex. “We had some communication issues where we weren’t on the same page, and you’ve gotta tip your hat to West Virginia. They did some good things as far as pre-snap things that we spent a lot of time getting cleaned up in the last 72 hours. So, I feel good that we have those things cleaned up.”

72 hours from Thursday’s Backyard Brawl victory would be Sunday night. Right around 11:05 p.m., since, you know, the Brawl lasted just over four hours long. If four hours on the field resulted in 72 hours — three days — worth of instruction, that shows how seriously Pitt needs to hone in on Tennessee.

“Thankfully we face these guys, in our mind, for the fourth time now going back with Heupel at Central Florida,” Partridge said. “And we learned a hard lesson down in Orlando that first year, that whatever your plan is, you better make sure that it’s tight and concise and you don’t get too cute on what you’re trying to do schematically, so the kids can operate and communicate extremely quickly.”

Tennessee’s offense, now in the second season of Heupel’s up-tempo offense with Hendon Hooker firmly entrenched as the starting quarterback, is impossibly fast.

“Last year at this time, on average, we timed how long it takes them from whistle to snap and they’re four seconds faster than they were a year ago, so they’re back into that realm they were at in Central Florida, which makes sense because a year ago we were facing them after one game together,” Partridge said. “Now we’re facing them after 14 games together, so it’s really not a surprise to us that they’re operating at that optimum speed.”

It’s almost scientific, just how quickly Tennessee is able to effectively and efficiently run plays under Heupel, and Partridge pointed to the incredibly quick tempo frustrating referees working Tennessee games. He said if you watch a Tennessee game, when the referee is calling for the football along the sideline, the Vol players will sprint back to center and toss the ball to the umpire to set the ball that much more quickly.

Tennessee is operating at a level, Partridge said, that really can’t get faster within the rules of football. With a talented offensive line, a strong quarterback, fast wide receiving corps and a stable of running backs, it’s been impressive to watch the Vols’ offense work. And for Pitt to stop such an offense, it comes down to having a tight, concise game plan. If there are areas to clean up, they better be fixed.

The threat posed by WVU is entirely different than the one that Tennessee will offer Saturday afternoon, and while Partridge doesn’t envision seeing the same things on the field, he’s wary of any areas the Vols will be able to copycat. And of course, that insane level of tempo Tennessee operates with.

“We work hard at it, we do everything we can,” Partridge said. “Our goal in practice when we’re working with what we call the Rocks, our scout team, our goal is to get the play off in 10 seconds, which is hard. We have a lot of people involved in that operation, the entire coaching staff gets involved in helping our Rocks operate at that speed.”

Tennessee ran 92 plays against Ball State last Thursday, making use of Hooker, Joe Milton and Gaston Moore, and despite losing the time of possession battle, the Vols racked up 569 yards (351 in the air and 218 on the ground) and 32 first downs. And it’s not a drive-by-drive instance, it’s game-by-game. It’s a style of offense that Pitt has had to prepare for since the winter.

Pitt would spend some time during the spring practices, during the summer camp and finally during the last week of practices to incorporate ways to slow and potentially even stop Tennessee. And it’s all about stopping Hooker at the point of attack.

“Extremely athletic,” Narduzzi said about Hooker. “He can really make you miss in the open field. He has hard, violent cuts when he goes to change directions. And he’s an accurate passer.”

After the performance against WVU’s J.T. Daniels, there’s an emphasis to not only hone in on stopping opposing quarterbacks — especially after Daniels made the most of somewhat lucky, toss to the heavens throws — and stop Hooker in a statement performance.

After last season’s five-sack, three-turnover showing against Tennessee, a similar effort will be what’s needed to slow down the Vols.

We split with ucf