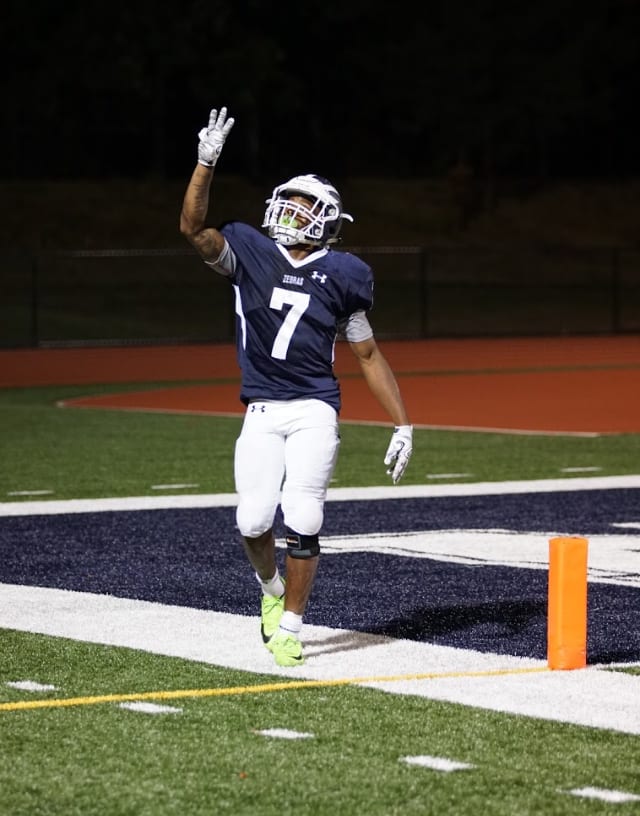 Sometimes life is about taking advantage of unexpected opportunities.

Last year, Pitt had the explosive duo of Quadree Henderson and Maurice Ffrench on the roster and expected them back for the upcoming season. As we know now, that won’t be the case because of Henderson leaving early to enter the 2018 NFL Draft.

For the last two years, the Pitt offensive coaches showcased Henderson’s speed by running him on jet sweeps and wide receiver screens. This coming season, expect that torch to be passed to Ffrench, who to this point had been utilized primarily in the Panthers’ pass game.

Who will be Pitt’s speed weapon two years down the road?

Well, a player from the same hometown and high school as Ffrench will be making a visit to Pittsburgh in the next couple of weeks.

This afternoon, Pittsburgh Sports Now talked to 2019 running back Dylan Johnson who told us he will be visiting Pitt later this month on March 24.

Johnson is a 5-foot-7, 170 pound back from New Brunswick, New Jersey and has been clocked running 4.4 in the forty. At this point, his only offer is from Howard but as you’ll hear, this is a player that’s in the football developmental stage. As more programs become exposed to him and see his tape, that offer list is sure to grow.

“I actually just started picking up interest from Pitt. I tried during my sophomore year but at that time, Pitt wasn’t looking for anyone my size because they already had Maurice Ffrench and Quadree Henderson, two speed players who were around my size. Then once I posted my highlight tape from my junior season, Coach Salem sent me a direct message on Twitter and my trainer told me that he asked for my number,” said Johnson.

“My game is speed. I consider myself a versatile player, I like to catch the ball out of the backfield and my coaches just try and get me the ball in open space. I can also run inside and my style is like LeVeon Bell’s, if things aren’t open, I’m patient and let things develop and open up.”

One of the reasons Johnson doesn’t have a ton of offers is because of a lack of game experience due to an injury suffered during his freshman season. Last year was the first time he’s really had a chance to showcase his skills and that super speed. His recruitment is starting to pick up and he seems like he’s going to enjoy this process.

“I’m actually really nervous because I’m not used to how fast all of this is going and happening. I really just started getting noticed and didn’t expect to already be talking with some of the schools that I’m talking to now. Recently, I was contacted by Oregon and that was a blessing. I used to watch Oregon and loved those uniforms. I also talked with Temple, Buffalo, Richmond and Louisville.”

“I played football in Pop Warner but I was never the kid that everyone scouted. Then in high school my freshman year, I broke my leg and played on it for three games. I actually rushed for over 300 yards in those games and that’s the first time I thought to myself that I could do something with football. Then last year, I transferred to Brunswick and rushed for over 1,000 yards and that’s when my recruiting started picking up,” said Johnson.

Johnson will visit Pitt for the first time for a practice on March 24 and is looking forward to getting to further develop his relationship with the coaching staff. I asked him if there’s anything that stands out to him about Pitt?

“I like the way they use their speed players on offense. I think they use them a lot different than other colleges do. I see how they use Maurice Ffrench and that’s who I’m used at Northern Burlington. It seems like that offense would fit me because of how they used Maurice and Quadree,” said Johnson.

Maurice Ffrench (2) runs after catching a pass against North Carolina at Heinz Field on November 9, 2017 in Pittsburgh, Pennsylvania — Photo by David Hague/PSN

As far as the upcoming trip, I asked Johnson what he was hoping to get out of it?

“It would be nice to get an offer but I’m not expecting one. I just want to get in there and meet the coaches and hopefully I become a player that they remember and hopefully look into me later in the year. I don’t really know what to expect because this is all new to me. I’m going there to use as a learning experience. I do want to go there and find out how and where I’d fit into their offense.”

Johnson is a player that PSN will continue to follow throughout the spring and during his senior season.