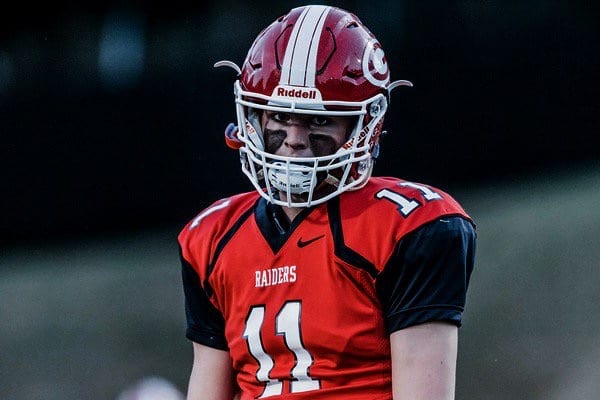 A player’s potential and talent level isn’t always measured accurately in their offer sheet or the star level assigned to them by recruiting services.

According to a well known quarterback guru that’s the case with 2019 South Carolina quarterback Davis Beville.

Ramon Robinson is the founder of Elite Position Training and EPT Football Academy in South Carolina and a former college and professional quarterback (AFL, CFL, NIFL) for 9 years.

Robinson knows the quarterback position and is currently working with someone that he believes could be the next Mason Rudolph.

That player is Davis Beville (6-foot-6, 205 pounds) a 3-star quarterback from Greensville, South Carolina and a top target of the Pitt football program.

“If you go back through the history of Mason Rudolph. He was slow played by colleges. He was a 6′-5″, 6′-6″ kid and a lot of teams weren’t on him at the start but once they started seeing him during his senior year productivity and then teams started coming. You can’t say he went wrong with his decision. Went to Oklahoma State, had a heck of a career and then got drafted,” said Robinson.

So what makes Robinson have such a high opinion of Beville and as he works with him, what’s his ceiling?

“Since we started training years ago, I’ve seen him continuously growing year after year. There’s never been a flat moment. Where as some kids will tap out as far potential but what I’ve seen with him is someone that is growing year in and year out and he will continue to grow because his ceiling is so high and there’s still so much football left in him,” said Robinson. “He’s a late bloomer and someone that I believe is one of the top quarterbacks in the country that has been overlooked and I’ve seen a lot of them. I feel he can and will do just as well as some of the quarterbacks that are rated ahead of him.”

If Robinson had to pick out one reason that he believes Beville will be a successful college quarterback what would it be?

“I would say because of how much he’s a student of the game. A lot of kids play the quarterback position but Davis is a student of the game and really knows what he’s doing. He has that leadership trait and has a great following with his teammates. He’s also a good athlete. People sleep on his athletic ability just because he’s tall and rangy but in the offense he currently plays in, he’s not asked to do a lot of running. If was asked to do that, I think he’d show a lot of people another aspect to his game. He’s a pro-style quarterback with a lot of athletic ability.”

Pitt was the first school to offer Beville and over the weekend, Northwestern offered him. I asked Robinson about only two Power Five schools offering so far and one of the reasons he believes he’s getting under recruited is because of the state and area of the country he’s from.

Since they were in on Beville first, when it comes decision time, will that benefit Pat Narduzzi and Pitt?

“Pittsburgh has a special place in his heart and he knows everything that the program is doing from Point A to Point B. Of course he’ll continue to get offers but at the same time, I always stress to kids, don’t worry about offers you don’t have. I stress worry about making a decision on places that you have established relationships with,” said Robinson. “Some Power Five school that might be a national championship contender might come in late and offer but what does that do for you? Where is the established relationship? Alabama or Clemson can come in and offer but do you have an established relationship with them? I tell kids make your decision based on what’s best for you not on what is the most popular college.”

Beville tells Pittsburgh Sports Now that he plans on making an official visit to Pitt sometime in May and wants to make a decision early this summer.

One other interesting note about Robinson, his nephew is recent Pitt basketball 4-star recruit Trey McGowens.