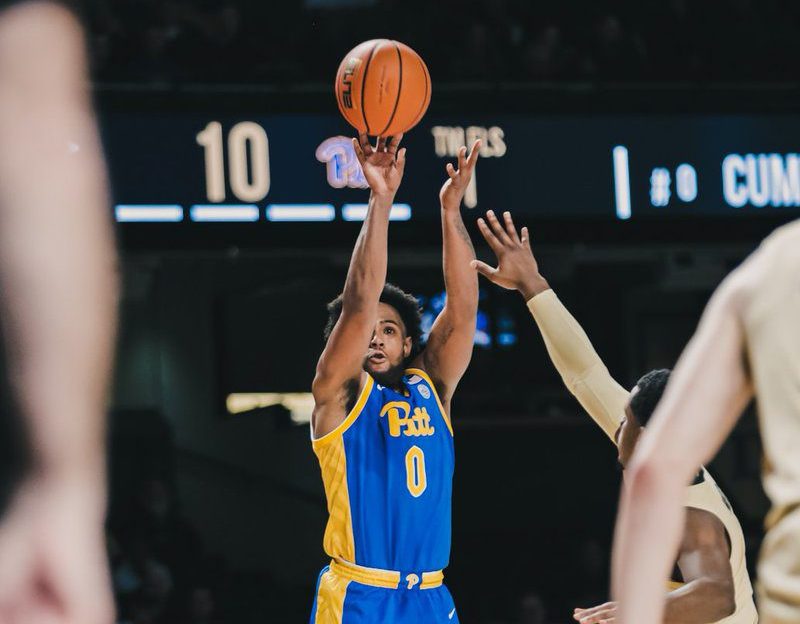 NASHVILLE, Tenn. —  As the seconds ticked away in Pitt’s 75-74 defeat against the Commodores, Greg Elliott knew he had one of two options to try to cut off Vanderbilt’s final possession.

He could try to get in the way without fouling Vanderbilt guard Tyrin Lawrence, knowing that he’d likely have little hope of forcing a miss on a layup. A miss would seal Pitt’s one-point lead and secure victory, but a made basket would leave the Panthers down one and less than a second to play, offering little chance to win. Or he could opt for the foul and hope that Lawrence, a 62 percent free throw shooter, would miss at least once and give the Panthers a chance in overtime.

Elliott went for the latter, but Lawrence upset the sound strategy. Coolly, the junior canned both free throws, forcing Pitt to find whatever shot it could. The Panthers couldn’t get a final look at the basket, giving the Commodores the victory and ending Pitt’s five-game winning streak on Wednesday night at Memorial Gym.

“I had 12 (Trey Thomas), and he’s a shooter, so I wanted to make sure he didn’t get an open shot,” Elliott said. “I don’t know what happened on the back side, but I know No. 5 (Ezra Manjon) was driving, and our defense collapsed. Once our defense collapsed, I had to rotate down and it was either a layup or you go earn two at the line.”

Pitt coach Jeff Capel had no problem with Elliott’s decision on the final defensive possession. Given Vanderbilt’s struggles from the stripe, it seemed to be the right decision according to the percentages. In his eyes, the Commodores simply made the play when they needed to make it.

“Both teams battled, and they were able to penetrate, get in there and cut behind our defense,” Capel said. “They had not been a good foul shooting team all year, but they really made their free throws at a high level today.”

Prior to Lawrence’s free throws, it appeared that Pitt (6-4) would find a way to survive despite several sloppy plays that allowed Vanderbilt (5-4) to withstand a difficult shooting night and hang around for the full 40 minutes. The Commodores ended up shooting just 40 percent for the game, but they won anyway because Pitt’s mistakes kept the Panthers from taking advantage of Vandy’s misses.

For the game, Pitt turned the ball over 15 times and allowed 18 offensive rebounds, which gave Vanderbilt an extra 20 looks at the hoop compared to the Panthers. When the Panthers’ 3-point shooting started to cool off for much of the second half, the Commodores had the opening they needed to take over the game.

“Coming into this game, they had not been a good offensive rebounding team, but they just absolutely destroyed us on the boards,” Capel said. “They were able to make some timely 3’s, but our inability to defensively rebound was really what did us in. We couldn’t get that one stop.”

By the time Pitt got going again, it was too late. Elliott fought gamely with 20 points to lead all scorers, including a pair of big 3-pointers in the second half to keep the game close. But Pitt didn’t get a single rebound out of John Hugley IV in 23 minutes of action, forcing the Panthers to depend more on Federiko Federiko for their rebounding.

Jamarius Burton actually led Pitt with eight rebounds, not exactly ideal against a team that boasted the size of 7-footer Liam Robbins and 6-10 Lee Dort. The Commodores came in with extra motivation to get the job done on the boards after getting outrebounded by Wofford, something they made sure Pitt wouldn’t do.

“That was something we really didn’t like and it’s something we’ve really been stressing over the past few days,” said Vanderbilt junior Myles Stute, who scored 14 points and grabbed four of his six rebounds on the offensive glass. “We were crashing and really trying to get those boards and just become a better rebounding team. I think we came out tonight and did a much better job.”

Now it’s Pitt who will have to do a better job as the Panthers try to recover from the end of their five-game winning streak. They’ll have two winnable home games before their next ACC contest, with the first being Sacred Heart on Saturday.

“We’re confident,” said Pitt guard Nelly Cummings, who scored 18 points and had what would have been the game-winner until Lawrence’s foul shots. “We just lost a game by one point, so we’re not going to slump our heads or shoulders. We’re going to get back to work the next day.”

Vanderbilt Stirs Up Past Memories at Halftime with Pitt

It’s so hard to have an “onto the next one” mindset with this program. It feels like every time things start to turn around under capel and trend upward, **** hits the fan – whether it’s a loss, an arrest, or an injury. Obviously this is just one game, but it’s damn near impossible to not have the recent past in mind after every game like this. I know you can’t win every game, but this false hope is getting real old and is why hardly anyone gives a rat’s ass about pitt hoops anymore. I wanna think they’ll bounce… Read more »

Hinson is an awful defender. I really hope they give grahme-Diaz more time at the 4 moving forward. Hinson is pretty good on the offensive end, but he kills this team on defense. The last play of the game is just one example of Hinson being clueless. Had he known where the ball was at and rotated down when the drive started, he easily intercepts that pass.

Pitt got almost zilch from the bench. Nike was a big zero ! Only Freddy Freddy produced anything,

One of the weaknesses that this team has is rebounding, and they have a tall team. In this case,they were physical and the referees swallowed there whissels. I was very proud of their fight and the way they hung close and almost pulled this game out. This is only one game and it is a long saeson, but this team will have other chances to make up for this loss, and they will.