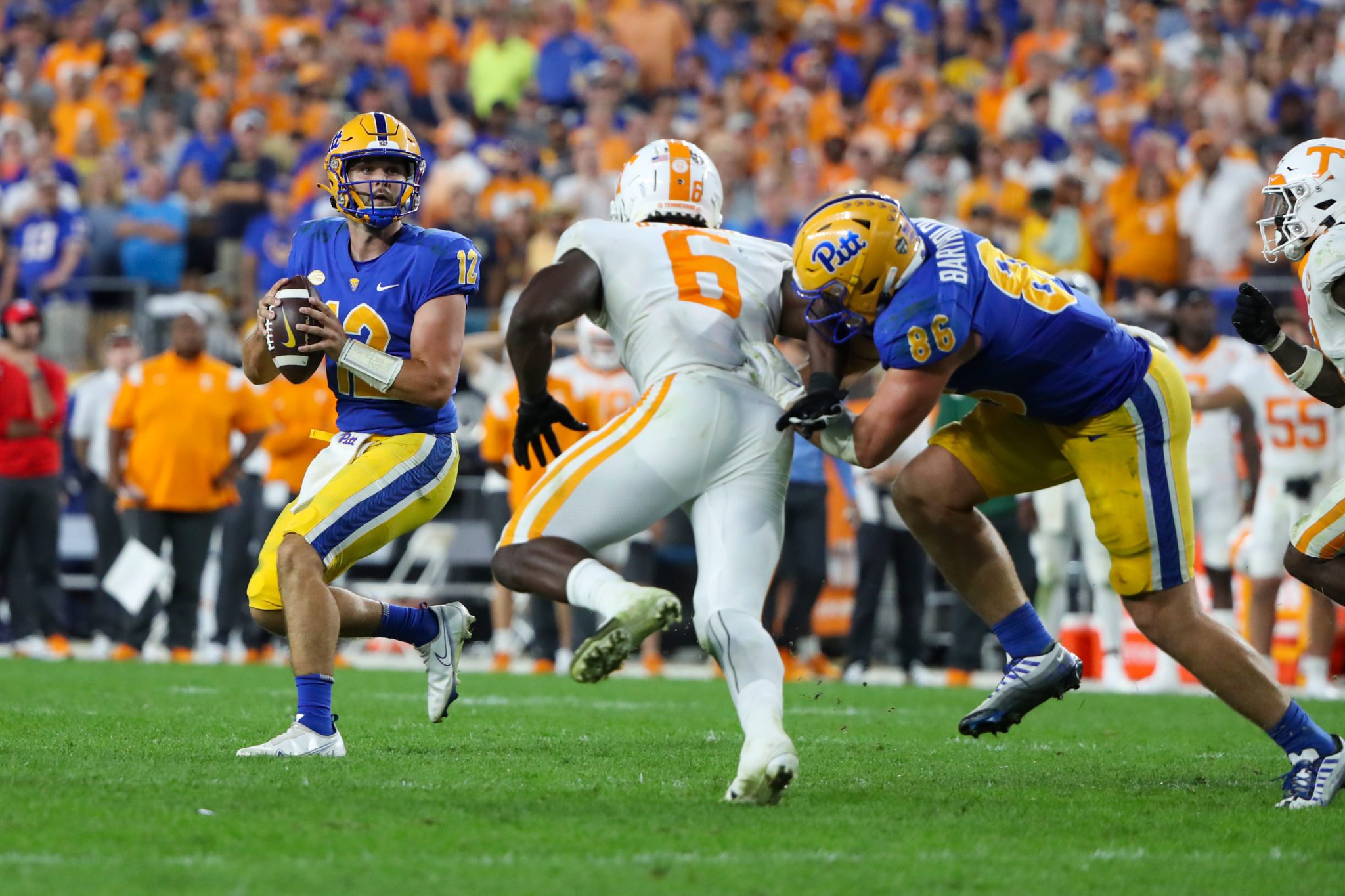 The Sun Bowl opt-outs have mainly come on the defensive side of the football, but that doesn’t mean that the offense hasn’t also suffered its own losses.

He isn’t quite just a next man up either.

Patti, who made his first start way back in 2019 against Delaware, spent nearly his entire career behind Kenny Pickett. He didn’t receive his next chance to start until Pickett opted out of the 2021 Peach Bowl — an opportunity that slipped away.

After just two drives, leading Pitt on an equalizing touchdown drive on the second, he left the game with a broken collarbone. His 16-yard touchdown scramble resulted in a broken shoulder, sidelining him for the remainder of the game.

Pitt would lose to Michigan State in the 2021 Peach Bowl, and Patti would lose the starting job to USC transfer Kedon Slovis over the offseason.

After years as Pickett’s backup, he once again found himself as a backup — this time to Slovis. But he never once thought about transferring, never once doubted his own abilities. If he didn’t start, it wasn’t because he wasn’t good enough.

Patti’s first chance to play arrived sooner than expected, thrust into action against Tennessee in Week 2, and he was forced to grind out a performance basically one-legged. He led a game-tying drive late in the fourth quarter to force overtime, hitting Jared Wayne for a 4-yard touchdown strike, and he legitimately did it on one leg.

“(Patti) was hurting,” Gavin Bartholomew said following Pitt’s loss to Tennessee. “I didn’t actually know what happened, but there were some plays you’d see him and he could barely walk.”

Tennessee scored first in overtime, and Patti and Pitt were unable to match. Patti would miss the next handful of games as a walking boot limited his mobility.

He returned to action in the 37-7 win over Virginia, quarterbacking the final drive, but that’s been the extent of his 2022 season. He completed 9-of-20 pass attempts for 79 yards and a touchdown. However, with Slovis hitting the transfer portal earlier this month, it opened the possibility of Patt starting one last game.

It began as an open competition between Patti and Nate Yarnell, but Pat Narduzzi essentially named Patti as the starter Monday. After last season’s Peach Bowl start, and with his own future elsewhere, this season’s Sun Bowl start is it. The final chance.

“Yeah, I mean, you know, the Bowl games are weird,” Patti said Monday after Pitt’s first bowl practice. “You get a couple weeks off, it’s not game after game, it’s not just a week off and then you go. You gotta train your body, you gotta give yourself time to rest and get back into it. So, I think getting that experience last year was great and I was ready for the game, obviously hot here, but I’m ready to come back and show out this game.”

It’s Patti’s last ride as Pitt’s quarterback, just his third start in four seasons, and it will come without Israel Abanikanda. But he isn’t worried about missing perhaps college football’s best running back, not with Rodney Hammond Jr. at his disposal.

“Me and Rodney have a good connection,” Patti said. “Since last year, obviously we’ve played together. A lot of the times he was the second guy, so I was in with him for the second team reps, so I’ve had a lot of reps with Rodney.”

Hammond, in his own regard, sees a good leader in Patti. He’s someone who you want around on and off the football field. If Pitt is going to beat UCLA, it will be because Patti played a big role in it. It will be because, as Jared Wayne says, Patti is a gamer.

“Nick and I have been together for four years,” Wayne said after Monday’s practice. “He’s been here my whole time, so I’ve always had a good connection with him. It didn’t take too much to get on the same page, and we kinda know each other’s tendencies. I know what type of ball he likes to throw, and he knows kinda how I run my routes, so it’s pretty easy to get on the same page.”

As was the case with Hammond, as Patti sat behind Pickett and Wayne sat behind Maurice Ffrench, Taysir Mack and Jordan Addison, the pair worked together well during second team reps. If Wayne is tired, Patti says, if his legs need a rest, that’s okay. Because the pair are already in sync.

The trio of Patti, Hammond and Wayne will go a long way in deciding the outcome of the Sun Bowl, especially as UCLA appears to be fielding a complete offense. As an elder statesman in the room, one of the longest-tenured Panthers, his message is simple.

“This is my fifth year,” Patti said. “I think just being here for so long and seeing the new guys come in and now I’m the older guy, I try to come out with a positive mindset every day. A positive attitude, come out with confidence, and I guess the guys just rally around that. I’m gonna try to keep it going for the game.”

Even as Patti served as the backup behind Slovis this season, the gracious backup in a competition that lasted until the end, he’s earned the respect of his teammates.

“The one thing I’ll tell you about Nick, he’s tough, he’s a competitor, he’s a smart football player and he’s a team guy,” Narduzzi said Monday after practice. “Our guys play for him. He’s probably our best leader at the quarterback position and our guys really like playing for Nick.”

The Sun Bowl provides the last chance to go out and play for Patti, and Patti himself just wants to go out one more time and bring home a win.

Guys play for him and he’s your best leader but you’ve never given him a shot. Good job duzz

Well, if being a good leader is the only skill needed to play quarterback, I suppose Winston Churchill could have been a great one.

sure, I heard he could spin it

Wow, never heard anyone say that about Patti.

There is my buddy Ed, thanks for getting right back to me like a true fan. Of course I watched Patti play. Of course Pickett should have played before Patti. Pickett single handedly got duzz an acc title in a down acc year.
Real question is was Slovis better, because duzz made it clear “Slovis is the guy”. Most fans would tell you that in this offense Patti was a better fit but stubborn duzz knew better.

You did not watch the Tennessee game. You can make the argument Patti was a better fit because he was more mobile. The truthful answer neither QB were as good as they needed to be. They go 10-2 with a better QB

sure did watch it…I know both aren’t good enough but out of the two wouldn’t you say Patti was the better fit?

Good luck Nick. You have persevered under difficult circumstances.