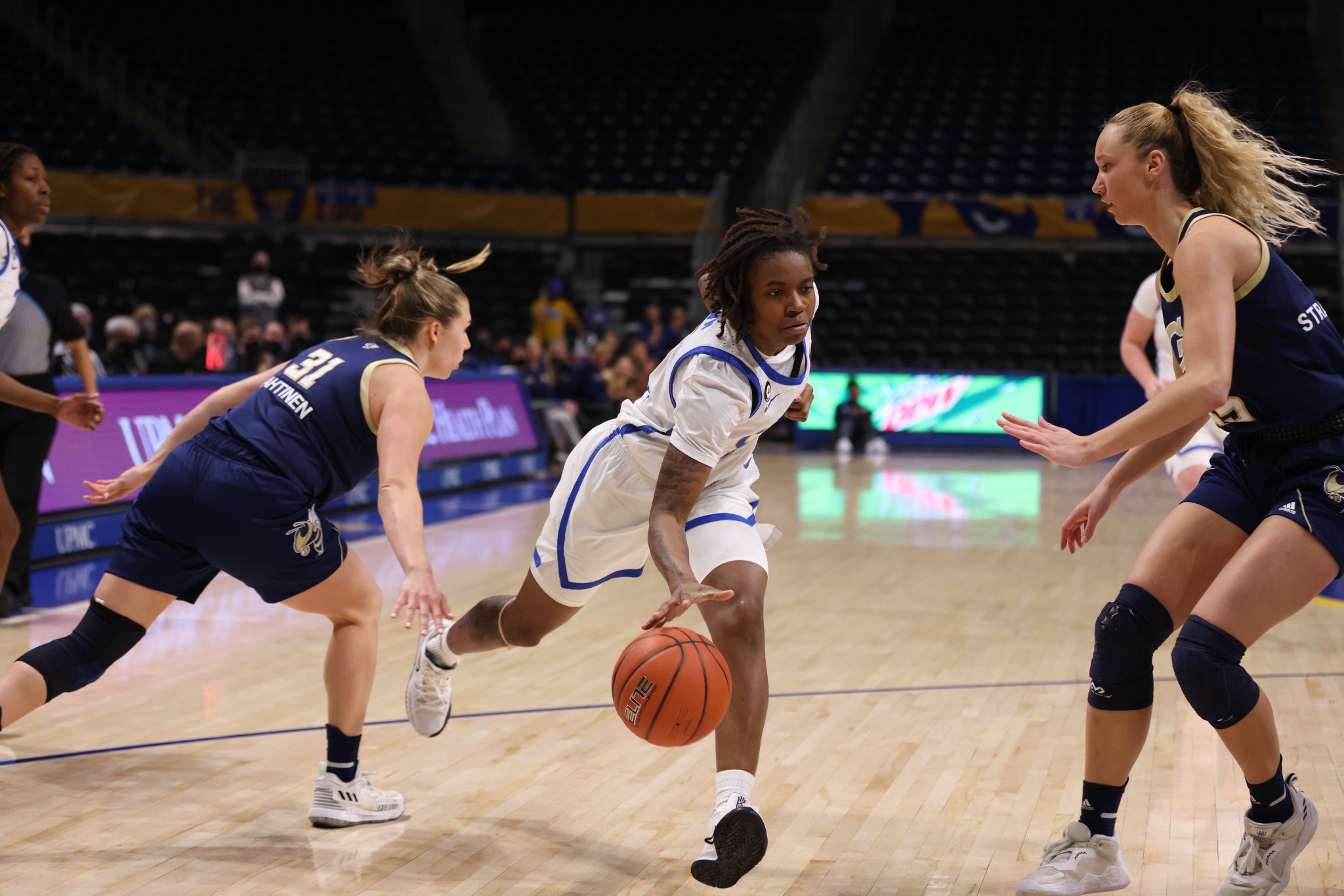 Pitt (9-6/0-4 ACC) was led by Dayshanette Harris’s 14 points and 11 of 12 players to see the court grabbed at least one rebound. Pitt’s bench also outscored its Georgia Tech counterparts 29-6. The Panthers also won the fastbreak battle 14-2.

“Georgia Tech is one of the best defensive teams I’ve seen in a long time in our conference,” Pitt coach Lance White said. “They just make you take hard shots. We knew that and knew we had to come into this game with a mindset of limiting them as much as we could. They made some shots early that put us in a hole right away. We’re still learning and growing and trying to figure out our exact identity. I don’t want it to take from we have all the pieces, and we can’t let these four (ACC) games define us.”

The Yellow Jacket defense entered play allowing 44.6 points a game and 42 points per ACC contest and early on, Pitt found out why.

Everett’s absence was explained by a university spokesperson as a coach’s decision.

“She’s obviously a big piece of who we are and what we need to be,” said White. “She can make big shots and take that pressure shots. We’ve played without her and played well without her. We have depth and versatility and in the fourth you saw some of the young kids, who are very talented. It does change us, but we’re used to it.”

When asked if Everett could be back on the court Thursday, White leaned towards a possible return provided “she’s got to do some stuff”.

Pitt was able to convert two first-quarter baskets, but also committed six turnovers. Georgia Tech swarmed each touch and handoff, making it difficult for the Panthers.

“It’s a couple of possessions that can relax us instead of putting us in panic mode,” said White. “Even today it was a couple of layups that we missed that then would’ve made us feel better about where we were rather than it being 10-2, it’s 10-6. It’s the smallest details and we are learning how important they are.”

That tenacity also stretched to the offensive end where even despite some early turnovers, possessions involved plenty of ball movements and then the Yellow Jackets crashed the boards to get baskets.

Pitt was held without a basket for the game’s opening seven minutes, when Amber Brown broke through, driving towards the basket for a layup.

Cubaj beat the buzzer with a second-chance two-point basket, allowing Georgia Tech to take a 20-6 lead after the first quarter.

Pitt again had its struggles finding baskets as Georgia Tech went on a 6-0 run to open the second quarter. It took the Panthers nearly four-and-a-half minutes to find points and it took almost five minutes for its first basket, which came from Harris.

Harris’s basket was part of a nine-point quarter from her as she had 11 of Pitt’s 21 first-half points.

Pitt has shifted Harris more towards a traditional two guard with Emy Hayford back in the lineup running the point guard spot with Everett out.

“I’m just going to do whatever my team needs me to do,” Harris said regarding a potential change in guard spot. “If that means switching to the two, I’m down for it.”

.@_dharris1 had it going in the first half!

In addition to Pitt’s struggles to score, the team also did not record an assist until a Taisha Exanor layup on the fastbreak, with Brown breaking the ice with a helper.

Pitt would get into more of a scoring touch, closing the second quarter on a 9-2 run and trailed 35-21 at halftime.

Georgia Tech scoring the opening five points of the third quarter and would stretch that into an 18-4 run as it rotated the ball in similar fashion to the first quarter.

The exclamation to the run came when Strautmane got into her place on the floor following an offensive rebound and was rewarded when Eylia Love found her for a three-point basket. An excited Strautmane pumped her fist and jumped a couple of steps in approval for her success.

After three quarters, Georgia Tech had Pitt doubled up on the scoreboard by a 58-26 count.

“Every game we are getting better and that is all you can ask for,” said Harris. “With that fourth quarter, seeing our younger players being able to get shots and make good shots is very exciting. I’m excited to see them grow and us grow as a team together.”

Brown now has nine points, three rebounds and three steals for the Panthers.

Strother’s three-point basket with 54 seconds remaining in regulation separated the teams by 11 points, though the time would not allow Pitt to cut any deeper into its disadvantage.

Pitt has a quick turnaround as it next hosts Boston College Thursday at 6 p.m.

“Once you lose it breaks your confidence and we have to work like crazy to get that back,” said White.